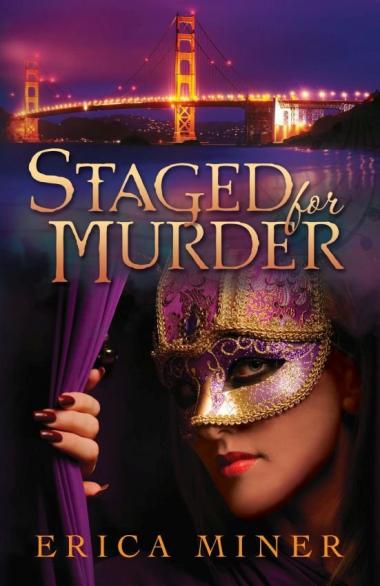 A Murderous Ring ’Round the 2018 SF Opera Wagner Cycle

Against the grim reality of the lifeless War Memorial Opera House, it’s almost a relief to read fiction about a spirited murder taking place there during a production of the 2018 Ring Cycle.

Erica Miner’s Staged for Murder is the third musical death novel by the writer who has been called “the Agatha Christie of Opera.” Online versions are scheduled for release this week, the pandemic-delayed print edition expected soon.

The victim is a famous, much-hated tenor, mowed down by a car deliberately just outside the building. Unlike most whodunits, here the culprit is present on the first page as he is about to kill:

Performers from the Opera could not avoid crossing that intersection multiple times, day and night. Pedestrian accidents were not that common there, but they did happen.

With the driver’s seat window open, he could hear fragments of their conversation. How he despised that voice; the voice of an operatic tenor who was so arrogant, so full of himself, that he strode about the stage as if he owned it; that he looked down on anyone who wasn’t an opera star like himself.

That bastard. The world will be a better place without him.

Their light turned red, and his turned green. It was time. Bearing down on the accelerator he hugged the right lane, trying to aim for Andres without hitting Ben. He had no gripe with Ben, but if he became collateral damage, well ..."

His thinking — including the hope that “the ‘accident’ would be featured on KTVU tomorrow” — and criminal action are known right off the cuff. But who is he?

For that, you must keep reading, being guided by violinist-detective Julia Kogan, heroine and survivor of murderous mayhem at the Santa Fe Opera, as chronicled in Miner’s last novel, Death by Opera.

The series started with former Metropolitan Opera Orchestra violinist Erica Miner’s Murder in the Pit, which takes place in the Manhattan edifice where she had spent so much time. Miner’s self-assertion in her opera mysteries is the character of “talented young violinist Julia from the Met,” who somehow finds herself embroiled in murder investigations: first at the Met, then at Santa Fe Opera, and now at San Francisco Opera.

“Julia is kind to a fault and sincere,” says Miner, “an ‘A-type’ overachiever who, unlike the majority of her colleagues, actually studies the libretti of the operas in order to become steeped in all aspects of the works she is performing. Because of her innate sense of justice, she enters the fray whenever someone close to her is unfairly accused of the murders. As a result, she inevitably becomes the target of the killer, who is more often than not bent on revenge.”

Miner — who experienced an injury that changed her career from the violin to the pen and keyboard — is firmly bicoastal. Her ex-husband was an assistant to the great SF Opera General Director Kurt Herbert Adler; her photographer son is a San Francisco resident.

Miner used her experience with the company and many contacts over the years to create Staged for Murder, beginning with SF Opera General Director Matthew Shilvock, whom she interviewed several times before and has been in touch with since. “He was kind enough to provide me access to the opera house and introduce me to some of the company members,” she says.

Miner calls SF Opera Dramaturg Emeritus Kip Cranna, an old friend, “my rock ... he took me all around the house, made numerous introductions, gave me slews of information, and has consulted with me in my writing about specific details and many aspects of the house and its members.

“He introduced me to archivist Barbara Rominski, who provided me access to a plethora of information about the company’s history and queued up audio and videos of the Ring for me to watch and listen to — performances, panels, and the like — which were absolutely invaluable for my research.”

Concertmaster Kay Stern, who in real-life fills the position Miner’s alter ego takes in the novel, “shared her insights about what her job entails and showed me around the orchestra’s backstage haunts.” (In the novel, Kogan is filling in for the concertmaster, who is recovering from what seems like — but might not be — an accident.

Miner also credits John Boatwright (“toured me all over the house, from top to bottom, and told me amazing stories of opera ghosts and the like”), Carrie Weick (“showed me the inner sanctum of the company’s impressive library”), former Communications Director Jon Finck, and others for helping out.

While awaiting publication of Staged for Murder, Miner is busy as usual giving lectures about opera. Her next webinar is In the Shadow of Wagner: Strauss and Debussy for the Boston Wagner Society, rescheduled to 1:45 p.m. PDT on Oct. 25. Registration is free.

Editor’s note for fans of murder mysteries with a local musical twist: East Bay musician and SFCV contributor Danny Carnahan has written three mysteries featuring the fictional San Francisco Irish fiddler Niall Sweeney and his musical cohorts who frequent a Richmond-district pub that will seems quite familiar to fans of the City’s traditional Irish music scene. Carnahan hints that he wrote the first novel as an excuse to fictionally kill off a critic who panned one of his early recordings, but the series has taken on a life of its own.

Books on music to inspire and inform.

Relax at the shore or in your own back yard with our 2017 selection of great beach reads featuring music-themed books.