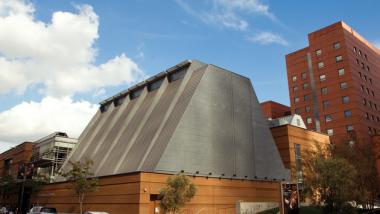 Colleges across the country have shut down campuses and moved classes online. Arts organizations large and small have canceled performances for the foreseeable future. And music schools are having to think twice as fast, dealing with the coronavirus crisis from both angles.

Amid a flurry of cancellations and closures in Southern California, the Colburn School announced on March 11 that it was suspending “all in-person instruction, performances, and events” until at least April 13. It was also requiring students to move out of its residence hall in downtown Los Angeles by March 17.

The response at the San Francisco Conservatory of Music moved a little more gradually. On March 10, SFCM announced that performances were closed to the public, its pre-college program was delayed one week, and classes were on as usual. By March 13, SFCM had canceled most performances and bumped its spring break up a week, with classes to resume online on March 30. Individual student recitals — a graduation requirement — were the exception; students could play or reschedule as they wished. But now that Bay Area officials have ordered residents to “shelter in place,” effective March 17 through April 7, those few performances seem increasingly unlikely.

When it comes to student housing, SFCM is the exception among schools, allowing students to stay if they choose. (The University of Washington, at the center of the coronavirus outbreak in the country, is another West Coast school letting students stay put.) Additionally, SFCM is offering summer housing options for international students not in a position to move. “Not all students can afford to travel home or may be prevented from travel to — or eventually from — their home countries,” said Jason Smith, SFCM’s associate dean for student affairs. “It all ties in to wanting our students to continue being able to be students.”

A Colburn student who declined to be quoted for this article mentioned that, amid the tumultuous move-out period at the school, staff were working hard and helping every student one-on-one. At the time of writing, neither Colburn nor SFCM has had a reported case of COVID-19 on campus.

“I feel lucky about my decision last year to live off-campus,” said Jieming Tang, a fourth-year violin student at Juilliard, where students have also been told to move out of residential facilities. “I’m not having to scramble last-minute to find a place to live and store my belongings.”

Tang has seen the coronavirus outbreak from multiple perspectives, first from family in China and now in New York City. His parents and grandparents live in Hefei, the capital of China’s Anhui province. “It’s 230 miles away from Wuhan, or one hour by train,” he explained. He went on to describe what daily life looks like for his relatives in Hefei:

“For the past month and a half, they have mostly stayed home as the New Year’s national holiday was extended, schools and nonessential businesses were closed, and transportation was limited and discouraged. Each apartment complex and residential community has temperature checkpoints at the entrance, and outside visitors are not allowed. Each household has groceries, medical supplies, and other necessities delivered to them by workers and volunteers.”

In fact, it was the growing seriousness of the outbreak in China that first spurred American music schools to take preventive actions. Tang explained that Juilliard sent an email to students on Jan. 24, with information about school resources, the virus, the situation in China, and “advising against nonessential travel to and from Hubei province.” SFCM sent a note to students on Jan. 23, and an update on Feb. 26. “It was similar to our response when a student has influenza, which happens each year,” said Smith. The emphasis was on healthy habits, like handwashing and not coming to class sick. Likewise, Colburn had been tracking the global spread of the virus since the beginning of the semester and following recommendations from local and national health organizations. Like American colleges generally, music schools attract students from around the world, so each school was plugged into what was going on internationally.

In the past week, preventive measures have accelerated. The rapidity with which schools across the country have shut down is both reassuring and unsettling. As instruction moves online, the value of a class, a grade, a degree, is thrown into sharp relief. Music students might feel this all the more strongly. “Music lessons … are a much more personally involved education model than simply lecturing and taking notes,” Tang said. “The private teacher and the student interact on a much more personal level.” Of course, online lessons — like online college classes and livestreamed orchestra concerts — are nothing new. But in the face of a national emergency, there’s only so much streaming one can take.

LA Phil and Others Cancel Concerts Due to Coronavirus Spread

Organizations and venues throughout L.A. are following guidelines from Gov. Gavin Newsom and canceling or postponing events.