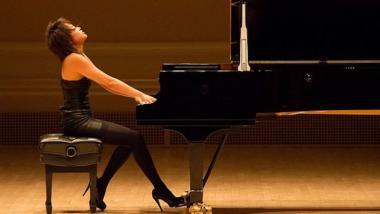 With Leonard Bernstein, Igor Stravinsky, Isaac Stern among the host of illustrious predecessors, Yuja Wang today received Musical America's nod as the 2017 Artist of the Year. The announcement hails her "career [that] soars above that of any pianist before the public today. She represents a new breed - the complete, thoroughly modern package."

The 29-year-old pianist is celebrated around the world, but she has a special relationship with San Francisco, which she had called her "second home" (after New York, where she lives in short and infrequent breaks between touring).  Yuja was 18 (nine days shy of her 19th birthday) when she made her little-noticed debut with San Francisco Symphony at a Chinese New Year family concert. As Yuja made a rare triumphant transition from prodigy to acclaimed virtuoso, it has been said of her: "Rather than tackling the instrument, Yuja makes it disappear, leaving the music to permeate the hall seemingly on its own."

Yuja appeared in Davies Hall and on SFS tours regularly ever since, has been both mentored and selected as a favorite collaborator by SFS Music Director Michael Tilson Thomas. (She has also been associated from her teenage years with such stars as Martha Argerich, and was taught by Gary Graffman, also the teacher of Lang Lang, Haochen Zhang, and many others.)

Currently, the pianist is performing in Cleveland and London, before joining SFS for pre-tour concerts on Nov. 2-4, and then soloing in Shostakovich and Chopin concerti on the Symphony's Asian tour, Nov. 22-29. Reached today on her way to Cleveland, where she will solo in the Bartók Piano Concerto No. 1 with the Cleveland Orchestra, led by guest conductor Jakub Hruša, Yuja told S.F. Classical Voice: "I’m extremely honored to be named as Musical America’s Artist of the Year 2017, joining a list of the greats!"

- Eighth Blackbird, Ensemble of the Year

- Susanna Mälkki, Conductor of the Year

- Andrew Norman, Composer of the Year