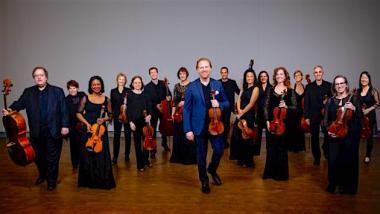 NCCO Music Director Daniel Hope — a Berlin resident who spent his youth in Yehudi Menuhin’s home in London and is now also music director of the Zurich Chamber Orchestra — will lead the way on familiar ground when the New Century Chamber Orchestra tours European festivals, June 17-27.

The orchestra, whose U.S. travels with Hope’s predecessor, Nadja Salerno-Sonnenberg, were filmed for the DVD On Our Way, will have a busy schedule of nine performances in 10 days across Germany and Poland.

Hope and NCCO have just completed performances over the weekend of “Forbidden Music,” a program of works written at the time of Nazi and Soviet oppression. The centerpiece of these concerts, Erwin Schulhoff’s Double Concerto for Violin, Piano, and Orchestra, will also be performed on the tour, alternating with Max Richter’s Recomposed: Vivaldi — The Four Seasons, previously featured on NCCO’s February concerts. Among other works on the tour will be Philip Glass’s Echorus and John Adams’s Shaker Loops.

The 27-year-old ensemble of 19 musicians will begin the tour in Germany in Philharmonie Essen’s Alfried Krupp Hall (June 17) and the Grand Hotel Heiligendamm (June 19) before making a stop in Poland at the Filharmonia Szczecin (June 20). Three appearances follow at one of Europe’s largest music festivals, Festspiele Mecklenburg-Vorpommern, performing in Ulrichshusen (June 21), Stolpe (June 22) and Schwerin (June 23).

The tour concludes with a performance at the Stiftung Frauenkirche in Dresden (June 25) and two more festival appearances at Kissinger Sommer in Bad Kissingen (June 26) and the venerable Schleswig-Holstein Musik Festival in Rendsburg (June 27).

“It is a great honor to embark on this historic milestone together with one of the finest chamber orchestras in the world,” said Hope. “Germany has been my home for many years now and it is with immense pride that I can share with audiences the same superb artistry that has delighted the Bay Area for over a quarter of a century.

“I am thrilled that New Century will make its European debut this season in some of the most important and spectacular venues on offer. I am particularly happy that we will perform at the Frauenkirche in Dresden, an historic and important symbolic place, which signifies healing and tolerance — something for which San Francisco stands.”

Additional albums include LIVE: Barber, Strauss, Mahler (November 2010) and Together (August 2009). Hope himself is one of the world’s most prolific classical recording artists, with over 25 albums to his name, including many prize-winners.

Under the leadership of Hope, New Century has also presented the world premiere of a co-commissioned Violin Concerto by Alan Fletcher and the West Coast premiere of Philip Glass’s Piano Concerto No. 3, brought renowned guest artists Menahem Pressler and Sebastian Knauer, and welcomed the Zurich Chamber Orchestra for a joint performance in San Francisco.