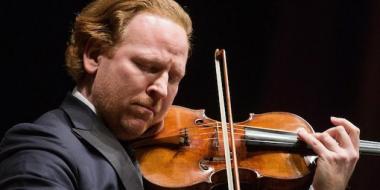 For the next three concert seasons, British violinist Daniel Hope will be in charge at the New Century Chamber Orchestra (NCCO), serving under the title of Artistic Partner, a position created “to provide artistic continuity throughout the search process for a permanent music director.”

For his inaugural series of concerts, heard Saturday evening at San Francisco’s Herbst Theater, Hope brought with him an impressive, brand new violin concerto, co-commissioned by the NCCO and two other music organizations: the Zurich Chamber Orchestra, where he is music director, and the Savannah Music Festival, of which he is associate artistic director. The commission went to American composer Alan Fletcher, President and CEO of the Aspen Music Festival and School.

Fletcher (b. 1956) created a concerto that, per Hope’s request, was connected to the city of Zurich, Switzerland. The composer obliged by seeking and finding inspiration in the city’s location on beautiful Lake Zurich, resulting in suggestive musical images of lapping water and wind ruffling the lake’s surface.

The second movement is a series of variations, in starkly contrasting moods and emotions, based on a chorale by theologian Ulrich Zwingli (1484-1531), a leader of the Reformation in Switzerland and also an accomplished musician. A third movement brings it all together.

In a vernacular that reflects his American musical upbringing, Fletcher draws broad soundscapes, with long melodic lines and evocative musical images, plus a dark, brooding solo part that received an intense, very personal interpretation by Daniel Hope and his gorgeous-sounding Guarneri del Gesù.

The discovery of the evening was Orawa, by Wojciech Kilar (1932-2013), a Polish composer who belonged to his country’s avant-garde movement in the Sixties, and who became internationally famous by scoring movies for Francis Ford Coppola (Bram Stoker’s Dracula, 1992), Roman Polanski (Death and the Maiden, 1994; The Ninth Gate, 1999; The Pianist, 2002), and Jane Campion (The Portrait of a Lady, 1996).

Orawa (1986) is one of Kilar’s most performed works and it is a mesmerizing piece. Energetic and propulsive, its texture changes constantly, to hypnotic effect.

Less impressive, even underwhelming, was NCCO’s performance of Mendelssohn's Octet in E-flat Major, Op. 20, which opened the concert. Played by NCCO’s complete string section, this marvelous piece lost the crispness and transparency of the original version for double string quartet, and the performance came with a distracting number of intonational discrepancies.

But overall, the Octet sparkled and NCCO members made it very clear that this is a wonderful piece of music to perform — real musicians’ music, in which every part is relevant, interesting, and important — just like Tchaikovsky’s Serenade for Strings in C major, Op. 48 (1880), which ended the concert in a graceful whirlwind of refined beauty.

The barely solicited encore of the evening had me puzzled: a version of the patriotic hymn “America, the Beautiful” in a slightly schmaltzy but admittedly interesting and beautifully played arrangement.

I’m unclear if this was meant to carry some kind of message, or statement, I found it a rather odd ending to an otherwise satisfying musical evening.

The lauded ensemble marks its own quarter century with a festival and bids farewell to Nadja Salerno-Sonnenberg with a special concert.

The polymath violinist will provide leadership, vision, and his celebrated musical versatility for a three-year term.