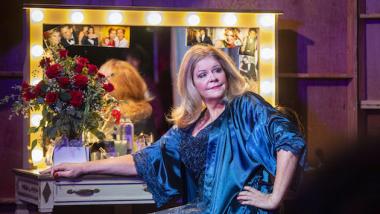 High up in the list of composer Jake Heggie’s favorables is that he has always been able to attract top stars to his roles. Frederica von Stade, Susan Graham, Talise Trevigne, and Joyce DiDonato have been prominent in Heggie’s casts throughout his career. That talent for giving stars vehicles that they love has now become a boon for Opera San José.

The South Bay company, led by an intrepid soprano, Khori Dastoor, has announced a production of Three Decembers for this December and heading the cast is Graham, in a role that was originated by von Stade at Houston Grand Opera, in 2008.

Of course, the show has much more topicality now than when it premiered. It is based on an unpublished play, Some Christmas Letters, by Terence McNally, who died of coronavirus this year. McNally’s play centers on exchanges of Christmas letters between a famous actress and her two adult children and it begins in 1986 at the height of the AIDS crisis, as her son writes about losing his partner to the disease. As popular with companies as this score has been over the past decade, it’s hard to imagine any time that it’s been more current.

The production has been filmed with the tools of the new Fred Heiman Digital Media Studio and is directed by Tara Branham and conducted by Christopher James Ray for performances beginning Dec. 3.

Graham’s connection with the project came because Dastoor thought she’d be great for the role of Madeline, a thought that was seconded by Heggie, who had had the unimaginable luxury of casting her as the lead in his very first commissioned opera, Dead Man Walking (2000). Of course, that meant that Graham had to quarantine with the cast for two weeks before filming so that they could sing together.

Once on set, the singers were in a little bubble: everyone in the building was tested for the coronavirus and the conductor and the two pianists playing Ray’s arrangement of the score were all behind wide plastic screens. The filming area was cleaned and disinfected each day, the crew wore personal protective equipment, and a dedicated safety officer remained on-site throughout the entire process to ensure distancing and proper protocols were all followed.

The production of Three Decembers was made possible by the Carol Franc Buck Foundation and the Ann and Gordon Getty Foundation. The Dec. 3 launch is a celebratory gala featuring a post-show conversation with Susan Graham, Jake Heggie, and the full artistic team. The production will be available to stream on demand for a limited time after that. Tickets are $40 per household (includes on-demand streaming access only) or $50 per household (includes on-demand streaming access plus admission to the post-show gala Dec. 3). For more information or to purchase tickets, visit operasj.org or call (408) 437-4450.

NB: This article originally identified Khori Dastoor as a mezzo-soprano. She is actually a soprano.

The popular mezzo-soprano justifies her adulation in a standout performance of an eerie Berlioz cantata.

The West Coast premiere of Jake Heggie’s It’s a Wonderful Life is only days away.

In an Enforced Pause, Opera San José Modernizes Its Relationship to Internet Tech