“Hadley was a name that I knew, I just didn’t know I knew it,” says Theodore Buchholz, a cello professor at the University of Arizona and a prominent champion of Henry Kimball Hadley (1871– 1937), the San Francisco Symphony’s conductor at its birth in 1911. 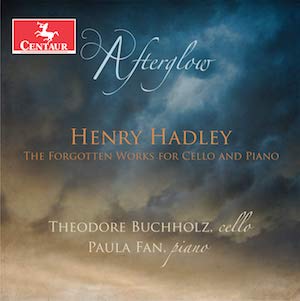 The Hadley sesquicentennial will be observed nationwide next year. Buchholz’s CD, Afterglow, scheduled for release next week on the Centaur Records label, is his performance of Hadley’s compositions he discovered in a New York Public Library archive — works that had been neglected for a century.

They include what Buchholz calls “a dozen fantastic pieces for cello and piano, originally written for Henry Hadley’s brother (the well-known cellist Arthur Hadley), dearly holding to a romantic vision when other art was turning increasingly modern.”

The program borrows its title from one of the works, Intermezzo Afterglow, evoking Hadley’s yearning for an aesthetic whose sun had already set. The pianist on the CD is Paula Fan, a Regents’ Professor of Music at the University of Arizona, who was for many years principal keyboard for the Tucson Symphony.

Buchholz’s unrecognized first encounter with Hadley came when he was a student at the SF Conservatory of Music, “a name I must have seen buried in the back of concert programs or in old pictures on forgotten walls.” Hadley has always been somewhat present in the city where he was the founding conductor of the orchestra born just five years after the Great Quake.

Hadley elevated a group of theater musicians to high professional standard before leaving San Francisco in 1915 for New York where three of his five operas were produced, including Cleopatra’s Night at the Metropolitan Opera. In 1921, Hadley became associate conductor of the New York Philharmonic under Willem Mengelberg. He was the first American conductor to hold a full-time post with a major orchestra in this country.

A curious aspect of his San Francisco days was Hadley’s active participation in the exclusive Bohemian Club, for which he wrote three “music dramas”, designed to be given a single performance outdoors at the Bohemian Grove. These works were very similar to operas, but also contained some spoken dialogue. Hadley later adapted music from these works to be performed as orchestral suites, and In Bohemia was one that survived.

Buchholz’s encounter with Hadley’s music eventually led to New York, but the interest and relationship began in San Francisco, where he “purchased a first edition of Hadley’s Konzertstück for Cello and Orchestra for $2 at The Music Rack, one of the great sheet music stores for antiquarian music lovers.

“I read through the concerto once or twice, then set it away. Years later, a colleague sent me an engraving of Hadley’s Hummingbirds on a whim. The piece struck me as a virtuosic juggernaut, yet an extraordinary addition to the cello repertoire along the lines of Flight of the Bumble Bee and David Popper’s Elfentanz.

The story moves forwards to 2017, when Buchholz played a concert in New York City, and with a day off, spent time rummaging through the sheet music at the New York Public Library:

Recognizing the name Hadley in the special collections catalog, I followed down the rabbit hole poring through boxes in the archive, chasing every Hadley cello work. Some acid-aged fragments were hiding in the middle of other works, seemingly lost yet asking to be found; from one folder, several of Hadley’s personal notes fell into my lap.

I found 12 manuscripts for cello and piano that had been neglected for nearly 100 years. It became my mission to bring these compositions to listeners’ ears. This album is the first-ever recording of these works.

The heart of this story is brotherly love. Henry Hadley was born in Somerville, Mass, and began his music studies at a young age. Henry’s younger brother, Arthur, took up the cello, and the two siblings remained very close throughout their entire lives.

As a young boy, Henry was asked what he would like to do when he grew up, to which he responded, “I am going to write a piece for my brother to play.” During this period he composed Cavatina, Petit Romance, and Gavotte. Showing an interest in European traditions, Henry dedicated these works “à mon frère Arthur D. Hadley.”

In 1894, the brothers moved to Europe, Buchholz tells the story, to complete their studies: Henry with composer and musicologist Eusebius Mandyczewski, Arthur with the great cello virtuoso David Popper. Henry Hadley returned to the United States in 1909. In 1911 when he became the first conductor of the newly formed San Francisco Symphony, Hadley brought Arthur along to be the orchestra’s principal cellist. Henry remained in San Francisco for four years composing prodigiously and elevating the stature of the orchestra to that of a first-rate ensemble. In 1913, Arthur and the San Francisco Symphony premiered Henry’s Konzertstück.

After 1915, when he moved to New York, Hadley composed a great deal and toured his works. His many compositions include five symphonies, over a dozen tone poems, overtures, and other orchestral concert works, five operas, chamber music, art songs, and even a film score.

Of special interest to Buchholz are Hadley’s “virtuosic Saltarello, the soothing Meditation (bearing the inscription “for Art”), the grand Mazurka, and the fueled-by-high-octane-nectar Hummingbirds.

“From this same time, Afterglow and October Twilight oozed impressionistic Technicolor. The bridge in October Twilight was a melody I knew. Set to words and arranged for big band in 1947, October Twilight achieved success as a mid-century pop standard, remaining vaguely familiar to our modern ears.” 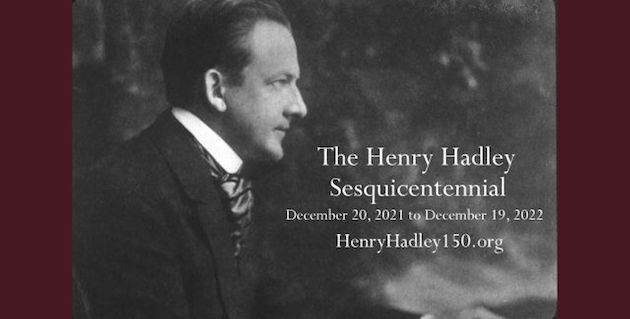 Other Hadley works Buchholz is championing include Suite Ancienne, “a piece that today feels emblematic of Hadley’s favor for forgone styles, with Baroque forms and movement titles, yet with moments of daring harmonic modulations; Solitary, that “stood out not only for its brevity but also for being penned in electric blue ink rather than the composer’s usual tidy black ink.”

In 1936, when Arthur died. Henry wrote Two Vocalises for Cello Alone to memorialize his brother, but it has been lost. Henry followed his brother one year later, and his widow entrusted his archives to the New York Public Library.

Besides his oeuvre of symphonies, operas, chamber works, dramatic works, and many short pieces and songs, Hadley’s legacy also included laying the foundation for the artistic success of the San Francisco Symphony, and for what would become the Tanglewood Music Festival. However half-forgotten he may be today, Hadley still holds the distinction of having a World War II ship christened after him: the S. S. Henry Hadley.

Hadley’s works, Buchholz says, are fascinating, holding to a romantic vision when that was no longer fashionable, “these works deserve their second life, an afterglow of their own.”

Louis-Gabriel Guillemain turns out to be ripe for rediscovery in this valuable recording.