In their debut commercial recording on Avie Records, Brillance indéniable, the ensemble Le Bien-Aimé hits the ground running with a masterful recording of chamber music by violinist and composer Louis-Gabriel Guillemain (1705–1770). Their success here comes as no great surprise; the ensemble may be new, but the members will be familiar to anyone who enjoys period-instrument performance.

The release bills violinist Alana Youssefian as the leader of the group, joined by Stephen Goist (violin), Michael Sponseller (harpsichord), and Matt Zucker (cello). These performers regularly appear with the world’s premier early music orchestras, and their collaboration here in a chamber music offering weds consummate professionalism with a clear passion for the material. 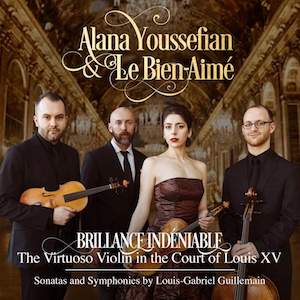 That material is delightful, indeed. Guillemain stood among the most internationally celebrated performers of his lifetime, and for good reason. Johann Mattheson, colleague of George Frideric Handel and famous as a music lexicographer, praised Guillemain’s virtuosity and his “bizarre” compositions. We might not today think of “bizarre” as a very nice word, but in Guillemain’s day it had a long association with the best, most forward-looking art and music. By the late-sixteenth century, the features most often associated with early baroque aesthetics — striking dissonances, heightened expressivity, and demanding virtuosity — frequently got classed together under the term bizarria. For Mattheson to deem Guillemain’s music “bizarre” was to call it exciting, difficult, and, perhaps above all, Italianate.

Like all Frenchmen who might aptly be called Italianistes, Guillemain’s music charmingly can’t shed its French accent. The first movement of his sonata op. 1 no. 3 is amusingly labeled “andanté,” in an apparent effort to help his countrymen know how to pronounce the word. That sonata contains a movement labeled “gratioso” whose expression marking is the only thing Italian about it at all. The movement is a dyed-in-the-wool rondeau from the other side of the Alps, with fussy little French ornaments and an obligation to play with a tasteful inégalité if the player wants to make an impression on listeners of taste.

That said, Guillemain did have command of many traits legitimately associated with the Italian style. This disc includes works labeled both “sonata” and “symphonie,” showing the composer’s awareness of the latest trends in public musicmaking. He favors the three-movement (fast-slow-fast) Italian form in these pieces. The symphonies also boast three-part textures akin to trio sonatas, hence an ability to accommodate large ensembles or, as here on this recording, smaller groups. These symphonies generally feature a more consistently homophonic texture than the sonatas, with one foot in baroque mannerisms and the other in the nascent classical language of Guillemain’s generation. This recording’s delightful performance of the Symphonie in G op. 14 no. 6, for instance, will appeal to listeners who love the inventive formal play of W.F. and C.P.E. Bach, as well as to those who appreciate the singable melodies of Joseph Haydn’s earliest symphonic experiments.

Also Italianate in approach is Guillemain’s sustained focus on virtuosity, which finds ready showcase in his sonatas. His E-flat-major sonata opens with a flowing adagio that sounds effortless in Youssefian’s performance — a remarkable achievement that listeners will appreciate if they realize that Guillemain’s extensive use of double stops here creates the illusion of a trio sonata, the piece sounding like there are two violinists playing atop the texture, whereas Guillemain scores the piece for only one. The opening movement of the C-minor sonata on this disc is another showstopper. It could easily be transferred to a larger ensemble and it would resemble a typical Vivaldi concerto, with an enjoyable use of ritornello form and alternation between showy soloistic writing and tuneful orchestral sections. Guillemain’s ability to transfer this textural variety to a small ensemble stands as a testament to his skill as a composer.

The players display their skills here, too. The disc’s subtitle, “The Virtuoso Violin in the Court of Louis XV —  Sonatas and Symphonies by Louis-Gabriel Guillemain,” proves appropriate. The programming provides ample opportunity to marvel at Youssefian’s chops, as in the B-minor sonata that opens the recording. The fast movements in this work are moto perpetuo exercises in sixteenth notes that occasionally erupt with faster-moving triplet figures.

And it isn’t only the violinist who get to show off. Guillemain was among the earliest composers to generate keyboard sonatas with the indication avec accompagnement de violon — an arrangement in which today’s usual balance of soloist-accompanist is reversed. The man certainly knew how to write for bass instruments and left hands, and he gives the continuo team plenty of opportunity for display, particularly in the sonatas, with their joyful tossing back and forth of motives in contrapuntal interplay.

Le Bien-Aimé has produced in this debut recording a nicely balanced offering, tastefully assembling a varied program out of four published collections by a composer not sufficiently appreciated today. Guillemain’s charming, light, and accessible symphonies contrast with the virtuosic and unashamedly baroque solo sonatas. The players capitalize on this generic distinction, marrying superb soloistic showiness with an accurate and clean ensemble.

Avie Records provided attractive packaging, along with a helpfully detailed liner essay by Adam Cockerham. The disc will make a valuable addition to the library for anyone who longs to enjoy the creative fecundity of mid-18th-century music and the interpretation of expert performers keen on giving Guillemain’s works new life.