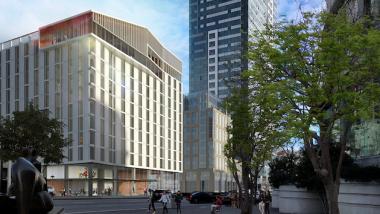 As a brass band played the Triumphal March from Aida, two backhoes swayed to the music in tandem on the construction site to the mirth of assembled dignitaries and invited guests. The bizarre event took place today in the heart of San Francisco, a block away from City Hall and across the street from Davies Symphony Hall.

That is the site at 200 Van Ness where within a couple of years a building will rise to house more than 400 S.F. Conservatory of Music students and a plethora of facilities.

Stull singled out for credit the late William Bowes Jr., whose $46.4 million donation launched the $185 million project, and Cavagnero, who Stull said started sketching drafts at the point when “there was no money, no site, nothing.”

Cavagnero’s aim is to create “a completely integrated environment and a microcosm of a 21st-century community,” paying special attention to the planned performance spaces with excellent acoustics and views of City Hall and the Civic Center.

Bowes was a founder of U.S. Venture Partners, which backed more than 450 startup companies in varied new fields, focusing now on information technology and health care. Bowes, an investment banker, became aware of the gene-splicing science known as recombinant DNA early in its development, and he invested in Cetus, one of the first commercial ventures in genetic engineering.

“Bill Bowes believed that music and beauty are essential to life and that education offers the best promise for tomorrow,” Stull has said. “I am profoundly grateful to both Bill and Ute for their inspiring investment and their transformative impact on our school. We miss Bill very much and none of this would have been possible without him.”

The mission of the school, according to the Conservatory, is “to usher in and nurture the future generation of musical talent while further establishing their identity and presence amongst the nation’s elite music education programs,” and the project fits in with that by “expanding facilities with a state-of-the-art education, performance, and student housing tower in the heart of the Civic Center district of San Francisco.”

Equity Community Builders is the development and project manager for the center, orchestrating permits, design, budget, schedule, and financing.

S.F. Conservatory of Music Is Now a Youthful Centenarian

The venerable institution inaugurates its next century with an impressive roster of guest artists and performance programs.