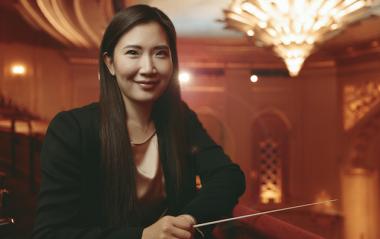 A couple of years ago, a young Korean conductor with extensive experience in Germany and the rest of Europe arrived to take up her first American assignments. Eun Sun Kim was an instant hit and, after her debut with Houston Grand Opera in La traviata, she was appointed as principal guest conductor there, the first person to hold that title in 25 years. In June 2019, Kim led an equally dazzling production of Rusalka at San Francisco Opera, which quickly led to serious discussions between her and SFO’s music director search committee.

Today, the company’s general director, Matthew Shilvock, announced that Kim has been signed to become (officially) the Caroline H. Hume Music Director of San Francisco Opera, the company’s fourth music director, following Nicola Luisotti, who resigned after the 2017–18 season. Kim takes up the title in August 2021, until which time she will be music director designate, and participate in planning and casting future seasons, and in orchestra auditions. Next September, she will conduct the season-opener, Beethoven’s Fidelio, at SFO. As music director, she may conduct as many as four productions a year. On Friday, she will lead the Adler Fellows’ “The Future Is Now” concert.

Kim’s initial training, in composition and conducting, took place at Yonsei University in Seoul, South Korea, her hometown. Moving to Germany for graduate work, she received a doctorate with distinction from the State University of Music and Performing Arts Stuttgart, then won first prize at the Jesús López-Cobos Opera Conducting Competition at the Teatro Real in Madrid. She assisted López-Cobos at the Teatro Real for two years and Kirill Petrenko at Opéra National de Lyon, then made her professional debut in the opera house, conducting La bohème at the Frankfurt Opera in 2012.

Like her other major debuts, her appearance at Frankfurt generated buzz, and she has been working the European circuit since then, both as a symphony and an opera conductor. Daniel Barenboim, general music director of the Berlin State Opera, arranged her debut there in 2015, and has been one of her mentors. In his testimonial about the SF Opera appointment, Barenboim said: “I have always found her to be a musician who takes the role of conductor with the utmost seriousness and who holds the responsibilities thereof above all else.”

In addition to leading several productions at the Berlin State Opera, Kim has conducted at many of the leading German opera houses, including Stuttgart Opera, Bavarian State Opera, Köln Oper, and the Semperoper Dresden. She has recently expanded the list to include English National Opera, Opernhaus Zürich, Royal Stockholm Opera, and upcoming debuts with the Vienna State Opera, Los Angeles Opera, Lyric Opera of Chicago, and the Metropolitan Opera. She’s also performing with an even more sizeable list of symphony orchestras, including the New York and LA Philharmonics, Symphonieorchester des Bayerischen Rundfunks (Bavarian Radio Symphony), and orchestras in Cincinnati, San Diego, Seattle, and Oregon.

As a true product of the German opera world, Kim has shown interest and ability in conducting pretty much anything that gets thrown at her: German operetta (Die Csárdásfürstin and The Count of Luxemburg in Frankfurt), Mozart (an upcoming Magic Flute in Houston), Wagner and Strauss (The Flying Dutchman in Frankfurt, Ariadne auf Naxos in Berlin), Rossini/ Donizetti (Il Viaggio a Reims in Madrid, Lucia di Lammermoor in Köln), Verdi (Il trovatore at the Royal Danish Opera, Copenhagen) and Puccini (Madama Butterfly in Stuttgart). If you’re wondering about contemporary works, she’s already doing modern repertory in her symphonic programs, and we’ll have to see if/when she attempts English/ American repertory. But don’t bet against it.

Kim’s appointment was especially warmly received by the musicians who played Rusalka with her. SFO Orchestra Committee Chair and Cellist Ruth Lane spoke for the orchestra, saying:

Eun Sun Kim brings deep intelligence and profound musicianship to her performances. She has a calm, matter-of-fact way of expressing herself during rehearsals, and never loses her cool or sense of humor. There is a partnership style to her leadership that invites the singers and orchestra to perform at their highest levels with confidence and ease. At the same time, she is in total control of the entirety — of the total pacing of the opera."

Among other nuggets in Kim’s biography released by the Opera today, she speaks English as a second language and also German, French, Italian, and Spanish. Her grandfather was a famous calligrapher who invented the Wongok style. And if you look her up on the internet, you may have to disambiguate between her and the (unrelated) soccer player who shares her name.

All the Women Conductors in San Francisco Opera and Symphony History

Look for an impressive lineup of debuts at the War Memorial this summer.