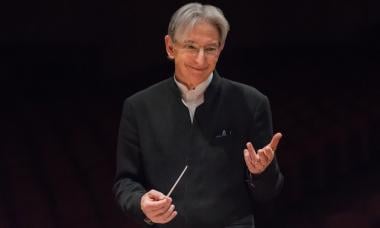 We’ve known the time was coming and today the S.F.Symphony announced the outlines of the 2019–2020 season, Michael Tilson-Thomas’s 25th and last as music director. It’s a fitting encapsulation of MTT’s musical priorities and ends, as it should, with a performance of Mahler: the “Symphony of a Thousand,” No. 8.

“With Michael, the S.F.Symphony has earned a reputation as an ensemble of risk takers who play with passion and absolute abandon,” said violinist Melissa Kleinbart, chair of the Orchestra’s Players’ Committee. “Over the past two decades, it has grown into an ensemble of musicians who approach each performance as an opportunity to create something magical, memorable, and meaningful, always willing to try to something completely new.”

That willingness to delve into the new will be on display throughout the season, which includes a generous helping of music hot off the presses. Some of these works are grouped as part of “The American Sound,” and include a new John Adams work, his eighth commission from the orchestra, to start the season (Sept. 19–22); Adam Schoenberg’s Losing Earth, written for Principal Percussion Jacob Nissly (Oct. 17–19); MTT’s own Rilke Songs, with mezzo-soprano Sasha Cooke and bass-baritone Ryan McKinny (Jan. 9–12); the West Coast premiere of Julia Wolfe’s Fountain of Youth, whose world premiere will take place this April with MTT and the New World Symphony in Miami (Jan. 16–18); and Mason Bates’s World’s Greatest Synth, a concerto for orchestra and animated film(!), conducted by MTT protégé Teddy Abrams (April 16–18). Other works new to S.F. audiences will include Aaron Zigman’s Tango Manos piano concerto (U.S. premiere), Wynton Marsalis’s Violin Concerto, Jessie Montgomery’s Starburst, Steven Stucky’s Funeral Music for Queen Mary, and MTT’s Lope, a piece about walking his dog.

Soprano Julia Bullock, who debuted with the orchestra in 2013’s West Side Story, singing “Somewhere,” returns as an artist-in-residence during 2019–2020, and she’s already proving to be an outstanding artistic curator as well as performer. She’s here Feb. 20–22, 2020, alongside Music Director Designate Esa-Pekka Salonen to perform Benjamin Britten’s song cycle Les Illuminations, based on poetry of Arthur Rimbaud, and Maurice Ravel’s Trois poems de Stephane Mallarme.

But Bullock’s own curated program for SoundBox, on April 24–25, 2020, is far more ambitious. The program pairs music by Nina Simone with keyboard music by Bach and chants by Hildegard von Bingen; blues songs with a solo violin piece by Samuel Coleridge-Taylor; and music by Josephine Baker with works by Poulenc, Honegger, and Milhaud.

And in June 2020, Bullock presents an updated version of a concert she first conceived of during her residency at the Metropolitan Museum of Art, called “History’s Persistent Voice.” For this show, S.F. Symphony is commissioning new music from Rhiannon Giddens, Camille Norment, Cécile McLorin Salvant, and Pamela Z, and the show includes West Coast premieres of works by Tania León, Allison Loggins-Hull (of Flutronix), and Jessie Montgomery. The show explores the concept of liberation through art.

There are two other artists-in-residence for 2019–2020: Sasha Cooke, who is designing a recital, scheduled for May 31, and an educational project that will involve visits to classrooms in the city; and Anne-Sophie Mutter, who celebrates 250 years of Beethoven with a concert of Beethoven sonatas (Jan. 26), a chamber music concert that will include the West Coast premiere of Jorg Widmann’s new String Quartet No. 6 (Jan. 27), and the Beethoven Violin Concerto (June 4–6).

MTT’s tenure as music director may be concluding, but there are lots of promising beginnings and continuing relationships here.

The unpredictable conductor finds something fresh in the most familiar symphony ever.