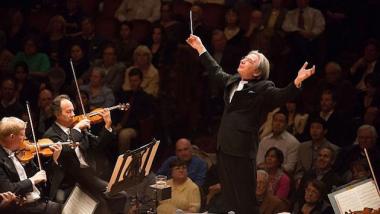 S.F. Symphony Marks the Long Arc of the MTT-Stravinsky Connection

More than half a century ago, 19-year-old Michael Tilson Thomas, just named music director of the Young Musicians Foundation Debut Orchestra in L.A., worked with Igor Stravinsky, Pierre Boulez, Karlheiz Stockhausen, and Aaron Copland on premieres of their compositions. (He also served as pianist for Gregor Piatigorsky, Jascha Heifetz, and other luminaries.)

Today, the San Francisco Symphony’s announcement of the 2018–2019 season — the orchestra’s 107th — prominently features a two-week Stravinsky festival in September, with MTT leading such gems as the early 20th-century ballet scores for the Ballets Russes — The Firebird, Petrushka, and Le Sacre du printemps.

The SFS music director, now 73 and looking forward to his 24th season at the head of the orchestra, says: “I am grateful to have known many composers, and to have had the experience of hearing them sing their music to me in their own voices.

“What Stravinsky was able to show me was a window into the mind that created the music. Through his conducting and through his voice, I was able to understand inflections and intentions that no amount of notation can express.”

This penultimate season for MTT — who will retire in 2020, becoming music director laureate — is rich in other theatrical and mixed-genre programming as well, something for which he has always been known. Symphonic music, old and new, is entwined with ballet, opera, staged productions, politics, ecology, and the movies in Davies Hall.

Here are a few examples of this eclectic approach, starting with the opening gala:

Celebrating Hollywood on Sept. 5 features Carlos Gardel’s Tango from Scent of a Woman, John Barry’s main title from Out of Africa, John Williams’s main theme from Schindler’s List, Ennio Morricone’s Love Theme from Cinema Paradiso, plus works by Gershwin, and a Bach concerto with Itzhak Perlman and students of the Perlman Music Program.

Immediately thereafter, the first subscription concerts, Sept. 13–16, will offer (in addition to Copland’s Appalachian Spring and Yuja Wang as soloist in the Ravel Piano Concerto in D Major for the Left Hand) Niccolò Castiglioni’s Inverno in-ver, a series of 11 musical poems depicting winter scenes. Conceived and directed by MTT, the production includes video projections by Clyde Scott and lighting by Luke Kritzeck.

The Sept. 13–16 concerts and other events are linked to the Asia Society’s COAL+ICE exhibition for climate change awareness. The Symphony is collaborating with Gov. Jerry Brown’s Global Climate Action Summit in September, bringing in business and civic leaders from around the world to follow up on their pledges to curb greenhouse emissions.

Commemoration of the 70th anniversary of the Universal Declaration of Human Rights with performances of MTT’s From the Diary of Anne Frank and Beethoven’s Symphony No. 9 (Nov. 15–18).

The orchestra will go on an eight-city tour led by MTT, his last as music director, says the announcement. The wording leaves open the possibility of a European or Asian tour in the following year.

On Oct. 3 and 4, the orchestra will open Carnegie Hall’s 2018–19 season as part of MTT’s Carnegie Hall Perspectives Series, which celebrates his more than 100 concerts in the hall since his debut there in 1969.

The Great Performers Series welcomes the Mariinsky Orchestra with Denis Matsuev on piano and conducted by Valery Gergiev. They will continue the Stravinsky theme with Fireworks, Symphony in Three Movements, the Firebird Suite and more on Oct. 21. Other visitors in the series include the Czech Philharmonic, conducted by Semyon Bychkov; recitals by Evgeny Kissin, Anne-Sophie Mutter, and Hilary Hahn; and a joint recital by Joshua Bell, Steven Isserlis, and Jeremy Denk.

Several contemporary and commissioned works are scheduled for the upcoming season. Artists represented include Anna Clyne, Andrew Norman, Kevin Puts, and Steve Reich. Steven Mackey says his commissioned world premiere is a tribute to MTT, “one of my closest musical friends ... I’m grateful for the opportunity to celebrate his legacy with the SFS and itching to contribute something quirky, outrageous, and improbable enough to utilize his extraordinarily vivid musical imagination.”

The Symphony's Fiscal 2017 operating budget — the last audited information available — was $81.7 million. Ticket prices for the next season are unchanged from the current ones: $192 to $918 for six-concert subscriptions, $384 to $1,836 for 12 concerts. Single ticket prices start at $32. SFS has numerous programs for community and school attendance either for free or at a low cost.

With the S.F. Symphony, the venerable conductor laureate shows how to do more with less fuss.