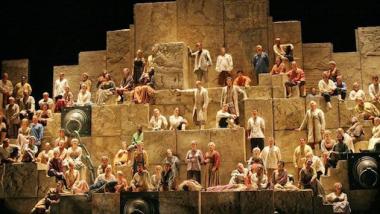 Nabucco — Verdi’s third opera, written in 1842, about the 6th-century BCE Babylonian King Nebuchadnezzar II’s siege of Jerusalem, destruction of Solomon’s Temple, and starting of the Jews’ “Babylonian captivity” — is popular enough among Verdi operas, but twice in one day by two different companies in the same area?

Unusual, to say the least, and yet that’s what the SF Bay Area will have on Oct. 20: Nabucco at West Bay Opera in Palo Alto, at 2 p.m., and Nabucco in a concert version by the Claude Heater Foundation in San Francisco’s Congregation Sherith Israel, at 3 p.m. (“Tale of Jewish people presented in a Jewish temple,” says the slogan.)

The Foundation performance — of the complete opera, with orchestra and chorus — will be cofounder and Executive Director Juyeon Song’s follow-up to the organization’s amazing debut last year with Tristan und Isolde.

Song, the acclaimed Isolde in that production, will sing the role of Abigaille, the shameless schemer who tries to wipe out her own family in her quest for the throne of Babylon.

Jonathan Khuner, who led the Foundation’s Tristan und Isolde, will conduct. The opera will be sung in Italian, with English supertitles projected. A variation in this production will be the opera’s famous “Va, pensiero” chorus of the enslaved Jews, to be sung in Hebrew.

Song’s selection of the venue is the result of much reflection, as Congregation Sherith Israel is a relevant community for a meaningful exploration of Jewish history.

Originally founded during the California Gold Rush, the synagogue has been in its historic building for over a century. The domed sanctuary was consecrated in 1905, and it is striking with its opalescent stained glass, elaborate stenciled frescoes, hand-carved Honduran mahogany, and a majestic Murray Harris organ. The congregation is on the forefront of contemporary values, championing social justice and activism on behalf of civil and human rights. Song says:

I found Congregation Sherith Israel earlier this year when searching for a venue for performance and classes for Harmony Project Bay Area, a non-profit that teaches music to under-served children. I was so impressed with Congregation Sherith Israel, and its historic sanctuary room. I fell in love with the beautiful architecture and gorgeous artwork, and immediately thought of Nabucco, Verdi’s opera that is about Jewish history and culture.

The amazing acoustics are perfect for allowing an audience to appreciate live musical performance. I do not know of any other performance of Nabucco performed in a Jewish temple and am very excited that Claude Heater Foundation will present this unique and meaningful event.”

In Palo Alto, West Bay Opera’s Oct. 20 performance will be the second of four weekend shows in the Lucie Stern Theater between Oct. 18 and 27. On Oct. 10, at 8 p.m., there will be a free preview with piano accompaniment in the Palo Alto Art Center, at 1313 Newell Rd.

Moscovich says of the opera: “Nabucco is about redemption, and we need a redemptive kind of hope these days. A love triangle set against the monumental backdrop of ancient Babylon, Nabucco is the opera that propelled Verdi into international stardom.”

In the cast, Jason Duika sings the title role, Christina Major is Abigaille, Claudia Chapa is Fenena, Ben Brady is Zaccaria, John Kun Park is Ismaele, and Kiril Havezov is the High Priest of Baal.

About how rare this “rare opera” is, SFCV’s Michael Zwiebach found this information:

It’s surprisingly popular for an opera that is not often mentioned with the other Verdi heavy hitters. According to Operabase, there are more than 180 performances of Nabucco worldwide in 2019, including nine in Sarasota, Florida!

However, it’s really Germany (not Italy) that loves this opera. German opera houses perform it year after year. In 2019, there are/have been 15 performances in Regensburg, another 15 at the Theater Krefeld und Mӧnchengladbach, 14 at the State Opera in Dresden, 17 in Braunschweig, 12 in Hamburg, 12 in the Landestheater of Lower Bavaria (Passau/Landshut/Straubing), eight in Saarbrücken, six at the Deutsche Oper — that’s 99 performances right there and the list of German houses producing it goes on.

An ambitious premiere from a new Bay Area arts organization is slated for next month.