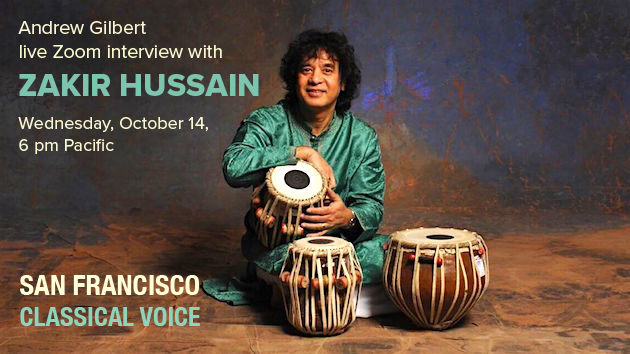 Long based in Berkeley, Andrew Gilbert has covered music and dance for numerous publications, including The Boston Globe, Los Angeles Times, The Seattle Times, San Francisco Chronicle, KQED, JazzTimes, and San Francisco Classical Voice. The one-hour interview will cover a wide range of topics and give an in-depth look at Zakir's story and insights into his current projects. The audience will have a chance to ask questions during the last 15 minutes.

Registration is $20 and must be made in advance.

If you’re new to Zoom, before you can attend the event you will need to make sure you have a Zoom account, which you can get at https://zoom.us/, and have downloaded and tested Zoom in whatever device you’re going to be using. You can find Zoom tutorials for getting started at https://support.zoom.us/hc/en-us/categories/200101697.

Zakir Hussain: Tabla Prince to Whom the World Listens

The much-recorded, much-loved tabla artist prepares for his Zellerbach Hall concert and discusses matters ranging from his childhood influences to his latest ensemble colleagues.