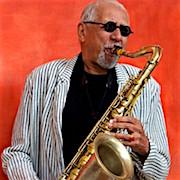 When jazz saxophonist (and flutist) Charles Lloyd makes music, he is like a force of nature. Swaying and dancing, he is like a man possessed, musically, physically, emotionally — and spiritually. Sometimes soulful, sometimes wild, sometimes soft and fluttery, what emerges is music that is always spontaneous and free. He has made his mark on the world as a musician who knows no boundaries.

Lloyd first emerged into the spotlight in the ’60s, a pivotal time in the history of this country — politically, culturally, spiritually and most notably — musically. Popular music in the pre-World War II culture of the 1950s included artists like the Everly Brothers, Frank Sinatra, Johnny Mathis, Doris Day, and Nat King Cole. For a while it seemed peaceful, idyllic, and hopeful. But with the onset of the controversial Vietnam War and the struggle for racial equality, dissatisfaction with materialism, racism, and global aggression grew quickly and took root in a counterculture movement that would forever change the nation. Peace, love, drugs, self-exploration, and creativity became the focus, and the folk and rock ’n’ roll music that evolved in that era can still be heard in cafes worldwide today.

While rock ’n’ roll was flourishing in clubs such as the Fillmore in San Francisco, jazz was also “under the influence,” and artists like Miles Davis, Count Basie, Bill Evans, John Coltrane, Chick Corea, and Herbie Hancock were exploring new territory. But it wasn’t until Lloyd performed at the Fillmore in San Francisco (the first jazz act to appear at that venue and share the bill with luminaries like Jimi Hendrix and Jefferson Airplane), with his groundbreaking freeform, wildly creative, and highly improvisational style, that a whole generation got exposed to a new kind of jazz, and that changed the musical landscape completely. This was most clearly expressed on Lloyd’s Forest Flower, recorded live at the 1966 Monterey Jazz Festival with an all-star quartet featuring Keith Jarrett on piano, Jack DeJohnette on drums, and Cecil McBee on bass. It was one of the first jazz albums to sell a million copies.

Lloyd, who was born by the Mississippi River in Memphis, Tennessee, which he calls “a very beautiful place, because there was all that rich music coming out of that red clay down there,” says he was enthralled with music from the time he was a baby. “The world didn’t make sense to me, and music did,” says Lloyd by telephone from his home in Southern California. “It was always my inspiration and consolation and something I could share with humanity.” As a young boy, when he heard Billie Holliday sing, he thought she was “singing just to me, and I wanted to go to New York and marry her.”

Although he achieved a high level of success in the ’60s, in 1970 he hit a wall, and retreated to Big Sur to contemplate his life. “I had lost my way musically and spiritually and I was off my course,” says Lloyd. “I just knew that I had to go away and find a foundation and recharge my batteries so I could come back and make a contribution.”

His path led him on an inner spiritual journey, which included a trip to India. He eventually found answers in the teachings of Ramakrishna and Vedanta, a philosophy that “teaches the harmony of all religions.” Lloyd, a gentle, philosophical and playful soul, calls himself a “child of the infinite,” and says that his spiritual beliefs and his musical beliefs are one.

“I was always on a path. I never could understand the disharmony in the world or how people couldn’t get along with each other,” says Lloyd. “Spiritual life is what it’s about. We’re spirits on the human journey and the sooner we wake up the better it will be.”

Lloyd, who turned 80 in March, will be performing at the Healdsburg Jazz Festival in June, helping them celebrate their 20th year. “I’m always thrilled and happy when I come up there to play,” says Lloyd. “It’s a special community. Everybody’s so warm and receptive — so what can a guy like me do but break out into smiles?” he adds playfully.

Jessica Felix, founder and artistic director of the Healdsburg Jazz Festival, discovered Lloyd’s music back in the ’60s, when she heard Forest Flower. “He touches your soul and your heart,” says Felix. “When I heard his music, it changed my world.”

He has performed at the festival many times over the years, and Felix says that his unique sound always pleases the audience. “They love him,” says Felix. “Everybody loves Charles. He has a sense of how to make everybody feel good, and his music really takes you on a journey. He knows how to really create an event — not just a concert — but an experience.”

Lloyd says that this is the best time in his life, and that his music is even lighter and brighter. “The longevity factor’s been a great aide to me,” says Lloyd. “I’m like a late bloomer. I keep finding these blooms and blossoms and these forest flowers and they keep opening me up to new vistas and new pathways.”

One of those new pathways is a record he just finished for Blue Note, Vanished Gardens, a collaboration between his current group, The Marvels, and three-time Grammy Award-winner, singer-songwriter Lucinda Williams, due out on June 29. Although a seemingly improbable match, the two met a few years ago and connected both personally and professionally. “There’s a lot of important music on this record,” says Lloyd. “It’s about waking up and going forward. Lucinda is a poet. She’s in it for real and she’s pure, and she has written a lot of special songs for the album.”

Asked if his relationship to music is any different at this time in his life, Lloyd responds, “I’m still drunk with it. New stuff finds me. Every time I play, it’s like a chasm. I’m nervous, and I have to step across this huge mountain.” But then the next thing he knows, he is wailing away and expanding musical boundaries with whomever he is collaborating with onstage.

Lloyd will be performing with a mix of musicians from several bands he has been involved with over the years, including tabla master Zakir Hussain, drummer Eric Harland, pianist Gerald Clayton, bass player Harish Raghavan, and guitarist Bill Frisell. “This will be a unique coming together and configuration of these great souls,” says Lloyd.

Lloyd’s passion and commitment to musical exploration and self-expression is also deeply imbued with a sense of grace and humility. “We’re passing through here and we have to make a contribution,” he says. “I’m blessed — I’m still a music maker. I just want to keep the lights on and keep a sense of wonder, because that’s what this music is — freedom and wonder.”

Corrections: As originally published, this article misspelled Billie Holiday's first name. The article also claimed that Forest Flower was the first jazz LP to sell a million copies. Although several sources make that claim, we have not been able to verify that information and have amended the text accordingly.

The trio bends but doesn’t break jazz tradition, carrying on the legacy of Ornette Coleman, Eric Dolphy, and Coltrane.

Greenlief and a host of collaborators bring An Improvisation to ODC Theater.