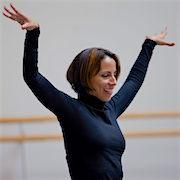 People fall on both sides of the fence when it comes to reading program notes or having inside information before experiencing a given artist’s work.

Maybe it’s enough to know that choreographer Annabelle Lopez Ochoa’s Requiem for a Rose, making it’s West Coast premiere in Smuin Ballet’s 24th season opener Dance Series 01 on Sept. 22, was originally created in 2009, on 13 Pennsylvania Ballet dancers. Some people might care only that the adagio from the Quintet in C by Franz Schubert was selected because “It’s the most Romantic music I know of,” according to Ochoa, in an interview one week after resetting the work on the San Francisco-based Smuin company.

For those who like more layers, historic context provides essential background: The Colombian-Belgian dance-maker trained at the Royal Ballet School of Antwerp, Belgium, and performed with a number of companies before settling for seven years at Scapino Ballet Rotterdam, during which time she was mentored and encouraged by opportunities to become in 2003 a full-time freelance choreographer.

And awards or critical acclaim? Such things trail in her wake for full-length ballets like A Streetcar Named Desire, a collaboration with theater director Nancy Meckler for the Scottish Ballet. Attention for her story ballets led to other significant landmarks: Broken Wings; the Life and Work of Frida Kahlo for English National Ballet; Dangerous Liaisons for Grand Rapids Ballet; and more.

Crave a disrupter? Ochoa invests her sometimes comedic, sharp, or cerebral self in physical theater plays developed with the Theater-Dance collective Fantasten. An intriguing tease in the bio on her website reveals she is exploring a submarine version of Coppelia with Dutch National Ballet Director Ted Brandsen and the company’s first soloist Michaela de Prince as Swanhilda.

Lastly, but not least-importantly, Ochoa is a female choreographer, which says everything and nothing, depending on point of view. “We had a huge discussion about the lack of female choreographers in the field at Tulsa Ballet that was on Huffington Post,” she says. “I grew up with female role models: the director of the first company, who gave me my first chance as a choreographer, was a woman.” And even at Scapino, with a male director who never told Ochoa she was only capable of making “a small piece,” she found encouragement, which leads her to admit, “I never felt my gender was a problem. I’m organized, not emotionally imbalanced, so it’s not my story, although I know it [gender inequity] is happening.”

Even so, she wants nothing more than to advocate as a feminist and be a voice so that the next generation can “get a go at it.” Hoping to inspire, she’s direct about first steps: Classical ballet dancers must be more assertive. “They talk to me in high, sotto voices in the studio, but they don’t do that when they’re at the café with me. Why?”

Female choreographers, she suggests, tend to work with contemporary, not traditional, classical ballet companies. Not only because pointe shoes aren’t always conducive to the kind of work that might include genre-bending styles — Ochoa’s ballets incorporate hip-hop, flamenco and other influences — but due to a more balanced exchange between choreographers and dancers. “It’s more of a back-and-forth dialogue in the contemporary dance world,” she says.

That’s not to say it’s an equal platform. Ochoa, known to control every detail and make changes right up to curtain time, doesn’t use improvisation in the studio with dancers when creating a new ballet. Instead, she arrives having poured herself into a theme, searched for, found and exhaustively become familiar with the music most connected to that theme, and with movement material developed on her own body. “I’m old-school,” she says, without apology.

Immediately, there’s a contradictory conversation she seems to have with herself. Ochoa says that although the work will always be grounded in something personal, something urgent that triggers her core, her ballets are not autobiographical. They are about retelling a story, be it hers, that of Frida Kahlo, or a narrative lived out by a character in Streetcar. Especially as she feels her body age, she sculpts the movement to fit the dancers in the moment. “Each time, I search for that child I was when I choreographed my first ballet at age 11. It is a craft and the more you practice it, the more you become comfortable with it.”

Comfort is most tested while striving to convey steps and their meaning to dancers: Without meaning, dances become buckets of random steps. Seeing a new ballet for the first time in a theater after the intimacy of a rehearsal studio, Ochoa says she faces her greatest moments of fear. “The theater takes over. I can’t control that. Does it work or not work? Sometimes stupid, simplistic moments have more value onstage. The muses: I wish they would whisper in my ear ahead of time. Communicating effectively [across physical] distance: that’s the biggest anxiety moment. My criticism level is high.”

Resetting a work, as she has done with Smuin, therefore, is a luxury. “You can look at your younger self. You notice that as a young choreographer you had so much to say and sometimes less is more. Sometimes giving more space to the music gets more to the heart of the matter.”

During her second week with the dancers, Ochoa re-choreographed small sections of Requiem, including the ending. Better able to pinpoint romantic aspects of the music and her movement, she surrendered to the work’s romanticism. “It’s almost like you exaggerate it, go over the top, but there’s a beauty and to share it on stage, with these classically-trained dancers who add long lines — it’s emotional.”

Asked if she’d like to have her own company one day, Ochoa is absolute: “No. I like the unknown. It makes me creative. I come in not knowing the names, the culture, the politics of the company. I like that I feel neutral.”

Diving in cold turkey also feeds Ochoa’s primary ambition: to never repeat, or become predictable. “Every time, I hope I have the guts to try even one new aspect,” she says. There’s always something to research. The day I think there is nothing, I will stop.”

Stopping is unlikely, with the perfect men’s dance, canon group sections, more hard-for-me-to-make solos and traditional, gender-restrictive narratives like male-female relationships transported into 21st century relevance on the horizon. “Ballet should reflect the world we live in. Old narratives are tremendously beautiful, but it’s also necessary to put contemporary people onstage. Ballet is ready to evolve, to get lost on a path, to not be only about pushing the body to the limit. Ballets with narrative and humor, not just how much you can split your legs or how fast you can move. Are we still doing elegant dances? Yes. Are we further along the scale?”

Ochoa leaves the question dangling. Intentionally. After all, her ballets are meant not only to offer answers, but to lay groundwork for the next, most urgent question.

Also on the Dance Series 01 program are Fly Me to the Moon, Michael Smuin's Sinatra tribute, and Serenade for Strings by Garrett Ammon.

Smuin Features Contemporary Works in Its Final Program of the Season

World premieres from Nicole Hoskins and Trey McIntyre and a 2015 Amy Seiwert favorite are on the bill.

Launching its season with terrific dancers and successful explorations of new repertory, Smuin Ballet appears poised to climb to a higher level in the regional ballet firmament.