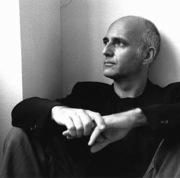 Building Towers Out of Dreams

Rebecca Liao on March 2, 2010
Anselm Kiefer’s monumental sculpture Seven Heavenly Palaces gave birth to Ludovico Einaudi’s latest album Nightbook in an almost physical way. In 2006, Einaudi performed among Kiefer’s mythically imposing towers and subsequently wrote music inspired by the awareness and feelings of transcendence aroused by sitting at the comparatively tiny grand piano. The album, released in January, has already been consumed by Einaudi's fans via iTunes and Amazon. But downloading can't compare to the live experience at the Palace of Fine Arts, where Einaudi will appear on March 15 as part of The Nightbook Tour. An Element of Einaudi's aesthetic is the live meeting ground of the concert.

Boasting a Top 10 spot on Billboard’s Classical Crossover chart, Nightbook (and the rest of Einaudi’s music, for that matter) has earned concerned, sidelong glances from classical music purists after the album hit No. 1 on the iTunes classical chart. The stubborn ability of the music to place one in a calmer mood puts it dangerously close to New Age, but rest assured: This music will not be playing in spas, yoga class, or any other place where it is better to leave your imagination behind.

Nightbook is an exploration of the transition between light and dark. Einaudi's solo piano provides the narration while combinations of strings, percussion, and electronically generated sound amplify and define that narration. Beginning from a minimalist base, the music veers from lyrical and peaceful to rhythmically driving, like minimalism or anthem rock, to somber reflective pieces, with aspects of world music as well. (Einaudi has played with Malian harpist Ballake Sissoko, among others.) From the first note, a story begins to build in your head. Before long, however, you realize that this story has no plot or movement. It is an enterprise in escape, full of vague but cunningly potent notions of ideal thought and feeling.

The mastery of this effect largely explains Einaudi’s success with movie soundtracks. He understands how to create music ready-made for a story to be superimposed onto it. Among his credits are the soundtrack for Fuori del mondo, an Italian film nominated for an Oscar in 2002; Luce dei miei occhi, for which he won Best Soundtrack at the 2002 Italian music awards; and the British TV series Doctor Zhivago.

Nightbook does not pretend to be a soundtrack; it just quietly makes listeners the character in a tone poem about themselves. The immediacy of his communication draws in listeners who are not necessarily familiar with classical music, and has made him one of today's most popular classical music composers. Though some longtime fans of classical music may not be open to his sound — as they have rejected minimalism — Einaudi will find appreciative ears even there. How much fun is it to escape and always meet the same story?