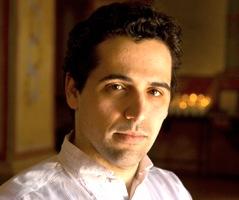 Casting a Shadow in Marin

For the past seven years, Bay Area audiences have been benefiting from Kathryn Gould’s Magnum Opus commissioning project as new orchestral works are premiered here. One of the three ensembles chosen for this project is the Marin Symphony, which will perform the premiere of (not) The Shadow, a symphonic poem by one of today’s best composers, Avner Dorman.

The piece is inspired by a dark fairy tale from Hans Christian Andersen in which evil seems to triumph over good. “That story is one of my favorite stories,” Dorman says. “My mom used to read it to me in Hebrew, a modernized version but quite faithful to the original. I bought the complete tales of Hans Christian Andersen in my 20s and always wanted to do something with that story.

“The title looks humoristic, but it’s not, really. It’s based on a sort of a Jekyll and Hyde story of a good and learned man who sends his shadow out into the world to find out where this beautiful music is coming from. The shadow leaves and then returns as a rich and powerful man who has gained his wealth and power by being able to enter people’s homes and learn their secrets. The good man protests that the shadow is not real and that he is the true person. But it’s the shadow that goes on to marry the princess, while the good man is hanged.

“At first, it seems clear who is good and who is bad, but the more I thought about it, it’s actually about who you like better. Of course, the person telling the story — the good man — is going to come across as the hero. But is that true? It’s a story of internal conflict and personality disorder, and it’s more about a mind divided against itself. You have to take the writer into account. I figured I really didn’t know who the shadow was, and I don’t really believe the storyteller. He’s trying to manipulate me.”

Dorman promises that the piece will be dramatic. It begins energetically with a personality that is alive and stable. It then becomes almost meditative, with one moment of great pain. And then it returns to the beginning, but not as naive anymore, as a listener never knows when it will all change again.

Dorman, who has a master’s degree from Tel Aviv University and a doctoral degree from Juilliard, cites his Israeli roots as a strong influence on his work. He notes that Joshua Redman, who recently premiered his saxophone concerto, claims there is a lot of soul in his music. “It’s emotional,” Dorman says, “and Israeli society is emotionally involved with everything. Pain is also a recurring theme. There’s a lot of pain in Israel, but most music has some pain. It’s universal, but Israeli culture may be more likely to talk about it.” Added to this is a strong Middle Eastern influence, though he claims it’s an even more Eastern influence, with ties to music from India and central Asia.

His interest in creating music started early; he has recordings he did around age 9 featuring improvisations, overlaying, and compositions in 5/4 time. But he feels it was attending a high school that specialized in the arts that really started him on his composing path. The music department stressed creativity over technique and crossing genres between classical music, jazz, and rock. “I loved it. I love the great classics, but couldn’t be a traditional pianist because it’s not exciting enough for me. I like creating new things.”

It’s an interesting combination — a contemporary Israeli composer with a world premiere based on a dark tale from Hans Christian Andersen — and a great choice for an evening of exciting music.