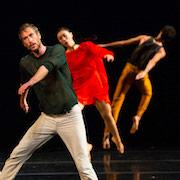 Choreographer Tere O’Connor and the Ambiguity of the Poetic

“I don’t know what that means,” O’Connor says in a phone conversation about his choreography writ large and the upcoming West Coast premiere at ODC of Long Run. The 2017 work combines the full force of O’Connor with collaborators including eight company dancers, costume designer Strauss Bourque-Lafrance and lighting designer Michael O’Connor. About the original score, composed entirely by O’Connor and according to his custom, begun and finalized only after the dance was complete, he says, “The music is almost like an audience member commenting on the work. It can have a harmonious or discontinuous relationship to the dance.”

During his 38-year career, O’Connor has created contemporary dances for his company, Tere O’Connor Dance, the Lyon Opera Ballet, and White Oak Dance Project, among others, and solo works for Mikhail Baryshnikov and Jean Butler. His honors include a 2013 Doris Duke Performing Artist Award, three Bessies, a 1993 Guggenheim Fellow, induction into the American Academy of Arts and Sciences in 2014, and more. An educator as well, O’Connor is professor of Dance at the Center for Advanced Studies at the University of Illinois at Urbana-Champaign.

A better term for O’Connor’s choreography might be architectural. But if it is architecture, it is modeled on a flexible, organic body and the human mind. There is logic to the form and rules of physics apply, although instead of mere skeleton, muscles, hemispheres, hormones, synapses, and glial cells generating imitation, the materials are a collective of human entities with all their contrapuntal parts operating, not reduced in scale to a generic human frame or single organ.

The brain/ mind is the place of dreams, imagination, true or false and muscular memories, neurological disorders, addiction, and intangibles like love, envy, desire, anger, sadness, and other emotions that, combined with motor centers, create actions without predictable outcomes.

When O’Connor, in his first dance composition course, was told to make a dance based on metered structures in an existing piece of music, he balked. “I thought, ‘Why would I do art based on art?’ I wanted my body to generate the dance. I wanted choreography to be the protagonist.”

The last word of his protest is a clue for understanding that O’Connor’s choreographic approach and philosophies extend beyond abstract construction. Using common tools — piano, acoustic guitar, Logic Pro, free music material found on the internet and others, O’Connor uses a dance’s structure to determine the sound environment. “I can get to more organic structures without the rules of metered music as a governing principle,” he says.

While choreographing Long Run, a work that drives physical extremes of rhythm, thrust, and duration before seeking calmer states, O’Connor reveals that references to pop culture and classical music played “silently” in his head. Little made-up songs that he says “came out of my body” later became portals to the actual music.

“The images are like an ocean of potential, so things appear and then are erased. It’s not one tyrannical voice. I don’t want singular definitions. At its center, dance holds multiple readings and constant change.”

The title is included in multiplicity. Long Run references O’Connor’s nearly four-decade career as a dance-maker. “I chose the title near the beginning because it laid out challenges. I’ve been making work for 38 years. I wondered, what the hell else can I come up with? I’ve been blessed to get to do this work and reach a place where I’m 61. It takes so long to understand what choreography is. It’s a spirituality that doesn’t line up with mainstream.” The title also refers to the temporality and duration of a dance that stretches like continuous wallpaper in a dream or surreal film. “There’s an accident, something that smells good, someone you know. No Western sense of beginning and end, or good/bad paradigm.”

When dance and sound are integrated for the first time in rehearsal, O’Connor says it is like a monster entering the room. Cuing for the dancer is at first difficult. Although musical specifics are important, O’Connor aims for transcendence. “It’s like a vehicle to go away from the reality of life. It’s not getting away from it to escape, but to be in a different position of viewership.”

Long Run, like all dance, he says, is emotional — if a person is open to expression that is not narrative. “For a lot of people, my choreography is completely moving. There are people open to the ambiguity of the poetic. For others, it’s a frightening place.”

What makes risk most rewarding when it comes to viewing O’Connor’s work is the embodied knowledge that runs like an undercurrent. Never circusy but often astounding, recognizable patterns skew in dynamic directions, then suddenly disappear without sensationalizing themselves. Bodies tossed as if by hurricanes resolve into an ocean of calmness; speed and complex rhythms in sound dissolve into gentle, wafting, singular lines. “I use erasure as a form of construction,” he says. “I don’t make dances that are depictions of anything. It’s an idea in my body and the result of that idea. It has its own dynamic. Maybe they’ll see it a lot of ways: that’s my goal.”

Hope Mohr and others celebrate the choreographer’s legacy with events at ODC.

Mark Morris Gets a Lift From His Dancers

Mozart Dances reveals the strengths and weaknesses of Morris’s choreography, and the artistry of his company’s dancers.