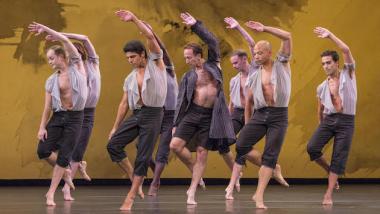 Mark Morris Gets a Lift From His Dancers

Among the modern choreographer Mark Morris’s many strengths are insouciant charm, an irreverent love for classical technique, and a musicality that is at once erudite and emotionally sensitive. In the early years of his career, that alchemy of attributes resulted in works like 1988’s Drink to Me Only with Thine Eyes, a set of achingly lovely vignettes commissioned by American Ballet Theatre, set to music by Virgil Thompson, and spiked with choreographic surprises, and 1991’s Nutcracker sendup The Hard Nut, with its sidesplitting swingers’ Christmas party, floor-rolling waltzing flowers, and gloriously joyful, gender-fluid snowflakes.

Over the nearly 40 years since founding the Mark Morris Dance Group, Morris’s command of those faculties is masterful. But it’s tempered by a tendency to coast on cleverness that has marked his work in the last decade. That maddening double edge makes the plotless Mozart Dances, which opened on Friday, Sept. 20, at Cal Performances’ Zellerbach Hall, as frustrating as it is endearing.

Every Morris work is inspired by and grounded in music, in this case three 30-minute piano works by Mozart, played sublimely by the Israeli-American pianist Inon Barnatan: Eleven is set to Piano Concerto No. 11 in F Major, K. 413; Double to the Sonata for Two Pianos in D Major, K. 448; and Twenty-Seven to the Piano Concerto No. 27 in B-flat Major, K. 595. Colin Fowler conducted the Berkeley Symphony in the two concerti and played the second piano in the sonata.

Morris picks apart the ornate layers of Mozart’s music (Morris’s musical acumen is such that he conducted the Philharmonia Baroque Orchestra during the run of MMDG’s Dido and Aeneas at Cal Performances in 2011) and decides exactly what counts, phrases, and melodies he will emphasize or downplay in his choreography for 15–16 dancers. In the women-centered Eleven, single-file deep pliés highlight the downbeats as the dancers move from one corner of the stage toward the center before breaking into swing-armed walking, fleet jumps that waft through the air, folk-dance riffs, and country-fried hoedown kicks.

Morris’s penchant for quotidian movement is disarming, and makes his work accessible as it reveals insight into complex music. Yet it takes whiz-bang dancers to pull it off so beautifully; as Eleven’s central figure, for example, Lauren Grant reels across the floor in open-armed, head-bobbing whirls, then pauses to unfurl a leg into the air and hold it while leaning backward with perfect aplomb.

Men take the spotlight in Double, with Aaron Loux channeling the Baroque in a deconstructed topcoat and choreography that veers from knock-kneed contemporary crouches and more deep pliés to the dismissive hand-waves of a nobleman and quartets who seem to converse in empty gestures. Until this point in Mozart Dances, the movement repeats often and rarely pauses, and no phrase lasts long; Morris keeps the dancers entering, exiting, recombining, and shifting tempi, preventing the eye from settling and the mind from thinking. Well, almost — eventually, the repetition becomes tiresome and Eleven’s whimsy becomes Double’s tedium.

A marvelous circle dance late in Double reminds us of Morris at his most enchanting. Under a sunny downlight and backed by Howard Hodgkin’s green-lit expressionist backdrop, the men hold hands, weave in a serpentine — an ancient folk-dance form that Balanchine used frequently — and partner each other in tender lifts; one has the sense of peeking on fauns frolicking in a glade.

After opening with the cute overload of dancers waving to the audience, then lying prone and waving to the ceiling, Twenty-Seven brings a welcome shift in structure as ensemble movement gives way to a solo for each dancer. We get to see the radiance and articulate footwork of Deepa Liegel; Laurel Lynch’s lissome extensions; Domingo Estrada, Jr.’s captivating, unhurried phrasing. Morris’s dancers not only rise to the level of his best choreography, they elevate the rest.

The in-demand pianist is set to debut with the New Century Chamber Orchestra this month.