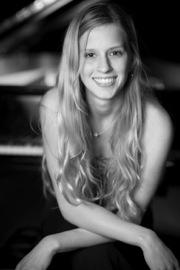 Jaime Robles on January 12, 2010
Old First Concerts on Jan. 24 will do what it does best: promote talented, emerging young musicians, when it presents pianist Elizabeth Dorman in chamber concert with cellist Robert Howard and violinist Dan Carlson.

Newly graduated from San Francisco Conservatory, Dorman has won numerous competitions throughout the Bay Area — such as the Keyboard Educators’ Competition, the Ross McKee Competition, and the Young Artists Beethoven Competition.

She has also been a featured performer at the Carmel Bach Festival, at the Yehudi Menuhin Chamber Music Seminar, and with the Smuin Ballet Company.

Although she played double bass for several Bay Area youth orchestras, she began to devote herself full time to the piano after a series of strain injuries. “I was playing on an instrument that was way too big from me,” she explains, “but I was always primarily a pianist. Bass was something I did for pleasure, playing Latin, jazz, and bluegrass. Piano was always my passion.”

It’s the repertory that draws Dorman to the piano, as well as its physical compatibility. And part of that repertory is what excites her about the forthcoming Old First Concert, which includes Sergei Rachmaninov’s Sonata for Cello and Piano, Op. 19, and the Piano Trio in A Minor by Maurice Ravel.

Dorman, who has played at the Old First church before, finds the San Francisco venue on Van Ness Avenue at Sacramento Street “a beautiful place to make music,” and she describes the concert’s music as being “at the pinnacle of the piano repertory.”

“The Rachmaninov is extraordinarily demanding for the piano,” she explains. “I feel like I’m climbing Mount Everest!” But rather than being daunted by the challenges the piece provides, she is excited and thrilled: “I guess I’m sort of an adrenaline junkie.”

As much as she admires the Rachmaninov because of its grand Romantic gestures, virtuosic demands, and subtle moments of complexity, she is quick to add that both pieces demand virtuosity for all the instruments. “The Ravel makes rhythmic demands on the strings, using the rhythms of Basque dances. He wrote the piece just as he was leaving for the army in World War I, but you wouldn’t know that: It’s magical and spontaneous, with special effects on the violin and really cool themes that he layers on top of each other.”

Although this is the first time that she has played with Dan Carlson, who is associate principal second violinist with the San Francisco Symphony, Dorman has played other concerts with Robert Howard, her cellist. Howard, who won first prize in the Rome Festival Competition, has performed locally with American Bach Soloists, Philharmonia Baroque, and the S.F. Symphony. “I love his energy,” Dorman comments. “We have the same rehearsal style. I love his freedom and the way he has of pushing me beyond my comfort zone.”

It’s a shared admiration. Howard agrees: “She’s one of those rare musicians who can actually show what she wants in her playing. ... Frequently, we can just play something through two or three times, without much discussion at all. Every time, we get a bit more in sync with each other. Her playing is never generic; her intention is always clear.”

As for any good musician, though, music involves the listener, and Dorman is aware of and sensitive to her audience: “I’m the only one in my family who plays an instrument, so I’m constantly surrounded by people who don’t know classical music. ... I love reaching out to them.” She is also a teacher inspired by her students, because they remind her that music can be motivated simply by the joyfulness of its own practice.

As for the future, Elizabeth Dorman now says she wants to “continue performing, playing concerts, teaching, and having the time to practice doing what I do now ... just keep learning and improving as a musician.” At some point, she hopes to share her art with other musical communities around the world, but at the moment her talents are ours to enjoy, savor, and applaud.