What does the mind look like during the creative process? You will get a glimpse at Fort Mason Center for Arts & Culture soon when Inkling / Pictures at an Exhibition: A Multimedia Orchestra Experience premieres on April 3. The concert space will resemble a small brain as pre-recorded EEG readings inform where orchestra musicians are seated so different instrument sections alight as visual brain scans are broadcast on the walls by projectors.

Composer/conductor Jaco Wong describes the creative state as being singular in focus, how time passes without awareness and distractions fall away.

“Inkling is like a moment and how long is a moment — you can’t really define it,” said Wong. “We were stretching this moment into this 15-minute experience, using this piece like you’re sitting inside of the brain in a symbolic, poetic, mysterious way in this gallery, which becomes a brain.”

Intersecting science and art isn’t new for Wong and animation artist, Evan Tedlock, whose last project involved carbon dioxide consumption and climate change. Still, Tedlock, an assistant professor of visual arts at the University of Maryland, Baltimore County, had worked with EEGs in art projects before. The two teamed up to explore their mutual interest in brain scans informing the artistic experience for concertgoers. To do this, they brought in neuroscientist Enrique Vargas of the UCSF Sound and Music Perception Lab.

“While there is a precedent of using EEG in artistic performances, this collaboration is one of the first to combine cutting edge research protocols and analysis so deeply into the creative process and final product,” said Vargas.

Vargas explains that in setting up the high-resolution, 64-channel EEG machine, electrodes were placed on Wong’s scalp to pick up neural signals from various parts of the brain, akin to “using a stethoscope to listen to a heartbeat.” What this enabled the team to do was localize and analyze Wong’s brain rhythms that provided insight into the neural underpinnings of composition. Wong described the process as looking into “what are my brainwaves looking like when I’m not composing or when I’m doing other activities versus when I am composing in the creative flow.”

“Experiencing music combines most, if not all, of your senses and unique personal life experiences. Therefore, music is experienced not in one specific part of the brain but as the interactions of various unique areas of time,” said Vargas.

For the visuals, Tedlock input the data recorded while Wong was composing hooked up to the EEG at the UCSF Sound and Music Lab.

“I was looking to identify the components of Jaco’s EEG signals that contributed the most to the overall signals observed during composition and identify their corresponding sources on Jaco’s cortical surface,” said Vargas. “Mapping these components and their signal strength throughout the experiment allows us to represent these unique data in a way that spans over time (akin to an EKG showing a heartbeat over time) — and thus can be interpreted by the musicians!”

Musicians will be in front of and also surround the audience, as Wong described wanting to “simulate different locations of the brain” during the performance. Wong describes the musicians as interpreting an EEG wave graph as if it was musical notation.”

From the beginning, Wong knew he wanted to host the orchestra experience outside of a traditional concert hall because he wanted to appeal to attendees who might not typically go to a classical orchestra concert. The gallery space at Fort Mason and its connection to the visual arts intrigued Wong, who drew comparisons with Modest Mussorgsky finding inspiration in visual art with his own creation of Inkling, which he describes as at times meditative, then overwhelmingly energetic, “just like our brains.”

Tedlock is bringing a team to install four large projectors that will broadcast the EEG readings on the long side of the gallery. Attendees will sit facing forward, with projections visible in their peripheral vision as part of the immersive experience in the dimly lit room.

All the musicians, music librarian, and the operations manager have ties with the San Francisco Conservatory of Music as alumni or current students. SFCM is providing financial support too, along with a University of Maryland grant given to Tedlock for the project.

In addition to Inkling, the orchestra will perform Mussorgsky’s Pictures at an Exhibition, orchestrated by Maurice Ravel, incorporating the Viktor Hartmann paintings that inspired the musical work. The last movement of Exhibition reflects on inspiration Mussorgsky found in Hartmann’s Great Gate of Kyiv a painting of a project that was never built. Wong is dedicating the movement to and in solidarity with the Ukrainian people.

Find tickets for the April 3 performance of Inkling / Pictures at an Exhibition: A Multimedia Orchestra Experience at Fort Mason Center for Arts & Culture at fortmason.org. 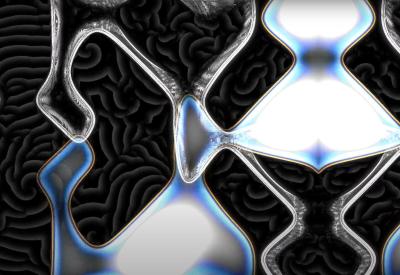 Jake Broder’s UnRavelled explores the relationship of creativity and dementia via the landmark composition and the painting it inspired.

Like a lot of us, monkeys generally prefer a Russian lullaby to German techno music. But given a choice between music and silence, the apes opt for quiet. It seems their brains simply aren’t wired to enjoy music or pay it much mind. “They don’t care about it,” said Vinod Menon, the noted Stanford neuroscientist who’s deeply engaged in research on music and the brain.