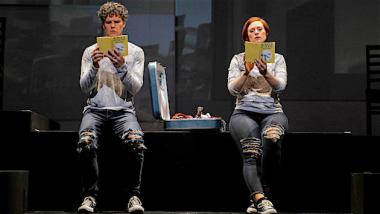 Before the violins scraped out the first notes of Portland Opera’s As One, two people appeared onstage with microphones. That’s usually a bad sign at the opera — but on Friday, no illnesses or cast changes were announced. Instead, Ella (a proudly trans young girl) and her mom Joy shared their life experiences, explained what this opera meant to them, and urged the audience to listen and learn. If that intro sounds dangerous to the tear ducts, the opera itself was even more so.

As One is a simple opera. Two singers and a string quartet. Seventy-five minutes. One character’s journey. Composer Laura Kaminsky, and co-librettists Mark Campbell and  Kimberly Reed (whose transition inspired the opera), and director/conductor/designer Andreas Mitisek find power in that simplicity. The stage is bare except for platforms, two chairs, and screens for projections. All sense of place comes from backdrop videos (the view from a bicycle, the shaky black-and-white of a deserted parking lot, the swirls of cursive handwriting) and props pulled out of a suitcase. There’s a ritual about it all, with actions like the moving of chairs and unfolding of papers perfectly timed to the music.

The opera is a compilation of mini-scenes. The strings saw out underlying patterns, and melodies emerge from that fabric for each memory. In part one, we see how much is gendered — clothing, handwriting, sex ed — and how alone this makes Hannah feel. Hannah Before (baritone Lee Gregory) sings “Entire of itself” as a proud, angry diatribe on independence, but the instruments beneath the voice reveal the loneliness that fuels her. Ache transforms to wonder in “To know,” when Hannah finds “the magic word” and learns that “there are others ... I’m not the only one.”

In part two, Hannah develops two identities in two different cities. When she passes for the first time (“Three words”), her joy sparks a breathless aria with fluttering vocal lines echoed by the violin. (Mezzo-soprano Hannah Penn’s ecstatic delivery provoked audible “wow”s from the audience.) Hannah decides on hormone therapy — and the music teeters and slides, slightly flat. The two singers’ bodies are piled on top of each other, a bewildered and intoxicated mess. Hannah emerges from her disorientation with the half-sung, half-screamed “joy” of feeling her body is finally hers.

Danger induces doubt. Screeching strings and harsh flashlights form the setting for a parking lot assault from which Hannah barely escapes. A radio voiceover tells of trans people around the world who have been murdered — including one here in Portland, Oregon. These stories make Hannah feel her connection to the broader community, but they also spark anger and fear. She determines to escape and travels to a cabin in Norway. After a few disastrous, isolated days, she realizes that she can be happy and revels in her strong identity. She goes home “as one.”

Hannah’s character arc is touching, but the opera is not an unbroken string of agitated emotions. Campbell and Reed fit in plenty of reversals, which always provoke a laugh. Kaminsky’s music helps the jokes land. Grandiose swelling accompanies Hannah’s description of communing with nature — and comes to a sudden halt when she confesses what nature told her: “You are an idiot.”

The score ekes out astonishing variety from a limited palate of six musicians. The scrumptious tones of the cello feel like a prayer; the plucked strings underscoring Hannah’s letter-writing evoke deliberation. The vocal lines sport playful word-painting — Hannah’s voice swoops and trills like the cursive she describes and navigates a treacherous chromatic descent on “loneliness.” The string quartet players even sing, when more voices are needed for a chorus of Christmas carolers and the ominous drone of “unidentified, unknown” murder victims.

Needless to say, this opera only works if every artist is superb. At Portland Opera, they were. Lee Gregory’s ringing voice balanced smooth legato with crisp English diction. Hannah Penn sang with gravelly bottom notes and a steely middle and top. The two complemented each other as actors: Lee with sharp gestures and a commanding but presentational air, Penn with a yearning look in her eyes and graceful movements. I got the sense — very appropriately — that Hannah Before was trying too hard whereas Hannah After was at home in her body. Conductor Andreas Mitisek and the string quartet from the Portland Opera Orchestra (Margaret Buchteler, Nelly Kovalev, Hillary Oseas, and Dylan Rieck) presented Kaminsky’s score with thrilling life and deep feeling.

There are few operas — new or old — that make me want to immediately return for seconds. As One did.

Correction: This article originally misidentified Kimberly Reed as only the videographer. She is actually co-librettist of the work.

One Life Divided in West Edge Opera’s As One

The chamber opera follows the transition of a transgender person to womanhood, sung simultaneously by baritone Dan Kempson and mezzo-soprano Brenda Patterson.

Spelunking in the Jazz Archives with Zev Feldman