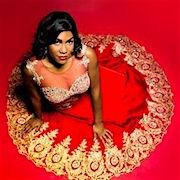 J’Nai Bridges Multitasks in Her Debut as Carmen

Carmen is tough. So is mezzo J’Nai Bridges.

Imagine the two becoming one on the War Memorial stage on June 5, when Bridges, 32, makes her role debut as La Carmencita, whom she regards as someone “many women strive to be more like and is now being seen as a symbol of universal womanhood. She wants to live free and be unbridled in every sense of the word.”

S.F. Opera’s advertising agrees: “She swore to live free and die free,” adding a potential spoiler, referring to Don José: “He made sure she got her wish.”

Another, more serious view of the character from Prosper Merimée’s 1845 novella and Georges Bizet’s 1875 opera is by the production’s stage director, Francesca Zambello:

Carmen is one of my favorite characters, even after all these years. I directed my first production of Bizet’s opera more than three decades ago, and it’s been fascinating to keep revisiting her character, especially as the larger cultural conversation around gender, sexuality, and power continues to evolve.

The #MeToo movement, which shines a spotlight on the prevalence of sexual harassment and assault, has been a call to reconsider the implicit messages around sexuality and consent in the standard repertory, which is full of predators and victims.

I find it fascinating that Carmen — who is neither predator nor victim — has been such a controversial figure. I would say that Carmen is a truly modern woman. She embraces her sexuality, she pursues her desires, and she achieves her ends using charm and wit alone.

For Bridges — already well-known to San Francisco audiences from her acclaimed performances as Bersi in Umberto Giordano’s Andrea Chénier and Josefa Segovia in John Adams’s Girls of the Golden West — drama and psychology are only part of her challenge:

“I knew that this role was a vocal marathon, but I did not quite anticipate how much of a physical marathon it is as well. I am thankful for my athletic background and consistent activity in the gym because it is certainly assisting me and, to a large degree, saving me.

“I call this role the Beyoncé role of opera because one must be able to sing and dance at the same time, which is much harder than it looks.”

Bridges credits the Alexander technique for “improved posture and movement, which is believed to have helped reduce and prevent problems caused by bad habits. This also tremendously helps me sing with less tension.”

Of the physical requirements, Bridges says in this production “I am bending down, rolling on the floor, being pushed, and dancing — all to be very conscious of, because the voice is affected by these movements.”

Above it all, there is the music: “Carmen has been in my life since I first started to sing classically. I had a voice teacher play and teach me the Habanera when I was 18, which is much too young to learn this aria. But little did I know she was just putting it into my mind and body because she knew I would one day sing the role.”

Add to the preparation “many hours of French language and diction, vocal technique lessons, vocal coachings geared more towards interpretation, Flamenco and castanet classes. Needless to say, this has been a very expensive preparation process, years in the making. I could not imagine a better place and time to debut this role.”

Zambello’s staging, which has been mounted by Opera Australia, Royal Opera Covent Garden, and Norwegian National Opera, also serves as debut for others: a role debut for tenor Matthew Polenzani as Don José and S.F. Opera debut for Romanian soprano Anita Hartig as Micaëla. Bass-baritone Kyle Ketelsen is the bullfighter Escamillo.

Former S.F. Symphony Resident Conductor James Gaffigan’s will cross the street from Davies Hall for a first-time appearance on the podium of a mainstage production, having already led the 2017 The Future is Now: Adler Fellows Concert.

The Catalan director will stand in for Calixto Bieito in a production that strives for true Spanish soul without the usual clichés.