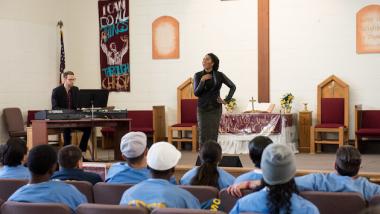 Two weeks ago, the San Francisco Opera gave its first visit to an institution not generally known for presenting cultural events — San Quentin State Prison. Yet, from the reaction of participants and audience, it seems like a program worth repeating.

The recital was planned by S.F. Opera’s Community Programs Director, Alyssa Stone, who enlisted the enthusiastic aid of several understudies for John Adams and Peter Sellars’ Girls of the Golden West. San Quentin’s Public Information Officer, Samuel Robinson was on board immediately and smoothed the way for the performance.

“I’ve always wanted to approach a prison and sing there,” said J’Nai Bridges, who was in the middle of the Girls of the Golden West run, in which she played Josefa. “I’ve always thought that there are these people who are in a completely different world and I have this gift that I’ve been given and I feel like it’s my duty to share it with as many people as I can.” Bridges had recently sung Sister Helen Prejean in Jake Heggie/ Terence McNally’s Dead Man Walking at Vancouver Opera. Her role preparation sparked a desire to reach actual prisoners with her music.

Like some of her fellow cast members in Girls of the Golden West, she sees music, in large terms, as an ideal vehicle for connecting with people, even over difficult social issues like those raised in the Adams/ Sellars opera. “There’s something about music, and also the human voice, that people automatically connect to whether they want to or not,” she pointed out. “It’s the most powerful way to confront issues and allow people to think on them and engage them.”

She says she felt little trepidation about entering the prison. “I tried not have any preconceived notions. I wanted to go in with a blank slate and in a nonjudgemental way. I think what we see from the outside and what we hear about the prison world are the worst [stories]. I went in not knowing what to expect and it ended up being a really lovely experience.

“And then these men — it was hard to believe that they had done something so bad to be there (and many probably haven’t, actually). It was eye-opening and I got a lot from it, more than I thought I would. I had a lot of compassion, and it wasn’t scary at all; it was a little odd, because it’s a different world. To see these men all in the same uniform and … stripped of their privacy; that was pretty strange.

“But I had conversations with them and they were so intelligent and hopeful — a lot of them — and they seemed like they were changed men.”

One of Bridges’s conversations was with a Native American man “and he just told me all about his life, about how he had grown up in unfortunate circumstances that led him to where he is and that he was just very hopeful — he was expecting his parole from prison. To see how high in spirits he was made me think, “Wow, this guy has been in prison for 22 years, has been pretty much stripped of everything and he remains dignified and happy and hopeful; and it just encouraged me, you know?”

The singer has taken these conversations to heart in thinking about the hurly-burly of the opera world. “At any moment, especially as an opera singer with this kind of crazy career, it’s easy to get down — it’s a lonely career and I have my days when I [feel] ‘unnh, I just don’t want to do this right now.’ But after speaking with him, I was very encouraged to find happiness — I do that anyway, but it was a reminder that life is what you make it. I wasn’t expecting to be inspired, but I really was.”

The context that Bridges gives goes a long way to explaining why art is able to touch people in unexpected ways and why different performers in many different artistic disciplines have gotten so much from presenting their work for prisoners (and, in some cases, working with prisoners to create that art.) Bridges was happy to learn that the emphasis at San Quentin seems to be on rehabilitation and preparing people to reclaim their lives. But she was especially gratified to see her music move people up close.

“I don’t know if they knew what we were singing,” says Bridges, echoing a line from the movie The Shawshank Redemption, “but they definitely felt it; I watched their faces, and they were deeply touched. And one guy even said, ‘You know, I thought that classical music and opera was dead and boring, but you guys definitely changed that thought.”

Which leaves those of us who believe that opera is definitely an art of the people feeling hopeful, too. Perhaps one day it will be performed regularly for an audience that looks and feels more like America at large. And, in the spirit of the season, Bridges added, “I just want to really emphasize that, for me, personally, I believe everyone can be forgiven no matter the crime. With my voice, and my gift, I hope to open up some hearts and ultimately encourage people to look within themselves for the better.”

Correction: In the first published version of this article, PR Officer Samuel Robinson was incorrectly identified as "Bill." We regret the error.

On Jan. 23, Sarah Cahill and the Ives String Quartet will play Henry Cowell’s music in two concerts at San Quentin State Prison, where the Menlo Park-born composer was locked up from 1936-1940.