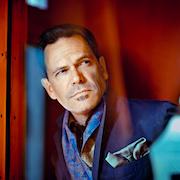 Deeply creative people are often compelled to create works of art that express and explore the mysteries of existence, often through the lens of a sacred or devotional belief system. Jazz saxophone legend John Coltrane did it on his recording, A Love Supreme; his wife, pianist and harpist Alice Coltrane, did it on her recording, Journey in Satchidananda; and guitarist John McLaughlin did it on numerous recordings with his groups the Mahavisnhu Orchestra and Shakti, just to name a few.

Kurt Elling, one of the most innovative and well-respected jazz vocalists and poet/lyricists on the scene today, seems to inhabit the lyrics of every song he sings, telling each story as if it came directly from his soul. He sometimes sets poems to music, or draws inspiration from great poets and philosophers like Rumi, Georg Hegel, and Jürgen Habermas, whose works he refers to as “cathedrals of thought.”

Elling, 50, began his singing career by sitting in with pros on the Chicago jazz scene in the early ’90s, while simultaneously pursuing a graduate degree at the University of Chicago Divinity School. Blessed with a three-octave range and an innate ability to scat and improvise, he got signed by Blue Note Records, and his career took off.

Now, with 13 albums to his credit, a dozen Grammy nominations — he won for best jazz vocal album in 2007 and his collaboration last year with Branford Marsalis, Upward Spiral, was nominated for best jazz vocal album — Elling is currently on tour, promoting his newest release, The Beautiful Day. It’s his first holiday album, and it features brilliantly reworked, jazzed-up arrangements of familiar holiday tunes (some with added original lyrics and verses by Elling). It embraces the spirit of the holidays with a reflective and culturally all-inclusive ethos.

A recent telephone chat with Elling from his home in New York City revealed a man who is deeply contemplative, intelligent, creative, and eloquent.

What inspired you to do a Christmas/holiday album?

I’m always looking for new challenges, and the holidays are such a rich and deep set of ideas and traditions and memories for people, and anticipation, and it can be fraught — and all of those things appeal to me.

I’m okay with the notion of a fraught holiday and especially these days when you have reactionary forces trying to own traditions, trying to manipulate, trying to say it has to be one way or another. Some if it is in reaction to that.

I am calling it a Christmas record, a tradition I know best through the pipeline of my earliest understanding on a philosophical or religious level. But for me, it becomes a way to investigate what’s universal, and what might be most inviting, and what might need to be jettisoned in terms of habits that we formed as a culture that might need to be altered and made to be more inclusive.

So you’ll get a thing like “Some Children See Him” where I’ve added a new verse to include: “Some children see her as a girl.” For me, that’s a moment that makes the creation of a holiday record worthwhile. When I can say, “Oh, well there’s an angle that we need to include,” or there’s an idea that was valuable, and there’s a way for me to plant a flag for some ideas that I believe in and that I wish to communicate to the brothers and sisters who maybe have been counted out in the past.

What can we expect at the upcoming concert with the Swingles?

The Swingles bring their own prolonged history as performers. They are extraordinary singers, arrangers, and musicians, and the aesthetic is not in any way the corny stuff that you might think is going to happen from a group with a name like that. I am so proud that they’re going to be joining me. I think it’s just going to be a thrilling occasion, and we’re doing some things to make sure that everybody’s welcome and that it’s a holiday program that really belongs to everybody.

Your father was a church musician and choir director and you went to divinity school. Was there a family expectation that you would go into the ministry?

I’ve got eight cousins who are or have been ministers — my uncle Norman was a minister and my father’s father was a minister, so they were certainly hoping that I was going to go that way. I didn’t take the notion of ministry as a vocation to heart, but I did have to do enough homework to come away with my own agreement, my own understanding with life and with the ideas that had been given to me. And for me that meant juxtaposing and exploring the ideas that I had been given in light of the greatest minds that I could come across by book or by discussion or by class — the people who have been asking: “What’s happening, what does this mean, who are we and why are we here?”

So I did go to graduate school to have that experience and I feel like I came out on the other side with the ability to hold onto some things, to translate some things, and certainly to continue to explore the questions in my work as a singer and a writer.

You did not finish your divinity degree, but went into music instead. Was there any particular event that led you to change your mind?

Well, I was singing throughout my time in graduate school as an emotional release and a continued way to explore music and have fun with that. I guess at a certain time the balance just shifted. I was getting so much encouragement, so much of a warm welcome, and I was invited back over and over and over again by the musicians on the Chicago scene — the elder statesmen, the cats who had firsthand heard Charlie Parker and first hung out with the Prez [Lester Young] and firsthand hung out with Bean [George Bean] — they were the ones who kind of embraced me and said, “Hey kid, you’re with us,”  — and that wasn’t the experience I was having in graduate school. It wasn’t the gift that I had been given.

But really what drove me, and what drives me to this day, is the notion of wonder and the poetic — the truest way in my mind to approach things is through poetry. Poetry has a fundamentally different sense of veracity than does an academic treatise. So much of the discussion in academia is focused around almost mathematical construction and deconstruction of thought systems. It can be inspiring, and it certainly is grand architecturally — but ultimately it’s a bunch of intellectual brick and mortar and it ultimately ends up being just as flawed.

Whereas with poetry, and lyrics and music, you get these flashes of insight in a much more immediate sense where you know it’s true, and you’re left with the lingering scent of mystery and the truer truths that come with that kind of expression.

For me, it works out best, as Rilke would say, to “live the questions.” And that’s really where the intersection of religious, philosophical, and theoretical awareness comes into play vis-à-vis the music and poetry. It is a very fruitful intersection for me, and it gives me a sense of interaction with the greater questions.

Are there any new projects coming up?

Actually just yesterday I was in the mastering studio with Branford [Marsalis], and he and I have been producing a new recording that will be out in March of 2018. Apropos of our conversation, that record is going to be called Questions.

Kurt Elling and the Swingles perform Thursday, Dec. 7 at 8 p.m. at Herbst Theatre.

Here’s what we heard at the inaugural concert of the Conservatory’s new Roots, Jazz, and American Music program.

Like other smart jazz organizations, the Monterey Jazz Festival is doing its part to develop the next wave of great players like trombonist Calvin Barthel.