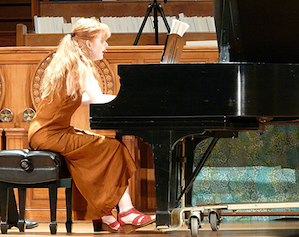 For years, whenever pianist Sarah Cahill drove across the Richmond–San Rafael Bridge from her Berkeley home, she’d spy San Quentin State Prison looming off to the left, and she’d think about the four years one of her favorite musicians, the great California-born composer Henry Cowell (1897-1965), spent locked up there. “I really love the music he wrote there during those four years and think it's really underappreciated,” she explains. Cahill, one of the West Coast’s finest interpreters of 20th and 21st century American music, knew Cowell’s music well; she arranged a festival for his 100th birthday in 1997, recorded his work for New Albion, and has performed his compositions often since, including at the Other Minds Festival.

When she read Cowell scholar and Juilliard faculty member Joel Sachs’ long awaited biography of Cowell, “suddenly, it seemed kind of urgent to bring the music back behind the walls where he wrote the music,” Cahill explains. That’s what she’ll do this Friday Jan. 23 at 11 a.m. and 6:30 p.m., when Cahill and the Ives String Quartet will play Cowell’s music in concerts at San Quentin State Prison, where the Menlo Park-born composer spent much of 1936-1940 in cell 1841.

Cowell was one of the most important figures in the history of American music, from his early days as a teenage piano prodigy who barnstormed through Europe and America with his notoriously wild original compositions like The Banshee that sometimes employed then-radical techniques like tone clusters and playing directly on the piano strings. By the time he was incarcerated in 1936, the prolific 39-year-old composer was also one of the world’s authorities on non-Western music (decades before it was called “world music”), editor of New Music, which published scores by the most so-called “ultramodernist” young (and not so young, including the then-almost forgotten Charles Ives) American composers.

John Cage called him the “open sesame” of American music, and he was even more influential as a teacher and connector than a composer, having taught both at New York’s New School and at Stanford, the University of California and Mills College, and privately, becoming, in the words of his student Lou Harrison, “the central switchboard for two or three generations of American composers.”

Yet his reputation has always suffered because of his imprisonment and the uncertainty surrounding it, abetted in part by Cowell himself, who provided contradictory and elliptical accounts. It took Sachs’ authoritative tome to finally set the record straight about Cowell’s sexual activity with a young man (legally an adult) who was part of a group of teenagers who often gathered at Cowell’s swimming pool and who was probably trying to either blackmail Cowell to let him use the composer’s car, or to exact revenge for his refusal to do so.

To protect the other boys (one the son of a friend) from having to testify, the naive Cowell refused a lawyer, refused to defend himself in a hearing, and foolishly pleaded guilty — not to child molesting or even the then-crime of homosexuality, but to the heinous sin of "oral copulation," illegal in California since 1915, regardless of the genders involved. Assured that the plea bargain would bring leniency without notoriety, he was stunned to learn that he faced 15 years in prison.

He was victimized by the era’s rampant homophobia, politicians either afraid of it or happy to exploit it, and by The San Francisco Examiner, whose "journalists" tried to induce Cowell to hire them to manage the publicity surrounding the incident; when he refused, the paper’s lurid coverage falsely claimed that Cowell had abused dozens of boys, which no one had claimed. They were later convicted of attempted bribery in a similar case, but by then it was too late to save Cowell from prison, and it wasn’t until 1940 that the accession of a Democratic governor and the efforts of dozens of his friends (including prominent artists like Martha Graham and Percy Grainger), especially his soon-to-be-wife Sidney, resulted in his being released and finally pardoned in 1942.

While in San Quentin, Cowell worked in the prison jute mill, studied Spanish and Japanese and the flute, wrote a dozen articles and an unpublished book on melody, gave lessons to the visiting Harrison. More important, Sachs wrote, he became "deeply immersed in the prison's culture,” spending over 20 hours per week teaching nearly 3,000 inmates music theory, appreciation, and history. He also directed, rehearsed, and played in the prison band; set up a music, book, and instrument lending system for the inmates; supervised other teachers, and composed dozens of new works, including at least 10 easily learnable pieces for the prison band and more arrangements.

“What I think is extraordinary was that he had barely any time to compose, with access to a piano for an hour on the weekends. Yet with such limited resources, he could produce so much and keep creating while conducting the orchestra and running classes,” Cahill marvels.

As a San Francisco Conservatory faculty member, Cahill is no slouch in the productivity department herself, having performed with many chamber groups and orchestras (including next month’s concert with the La Jolla Symphony in Lou Harrison’s Piano Concerto); she's commissioned dozens of new works, recorded many albums, and hosts a radio show (Revolutions Per Minute, Sunday evenings on KALW, 91.7 FM in San Francisco), as well as a new music series at the Exploratorium, and curates a monthly series of new music concerts at the Berkeley Art Museum.

But she’d never played in a prison. When she got in touch with the prison’s community outreach program, she learned about the prison’s work with the Marin Shakespeare company (featuring performances by inmates) and other arts programs run by Steve Emrick, who directs the prison’s Arts in Corrections program and has won an award for his work from the Dalai Lama, echoing Cowell’s attitude toward the inmates he served time with. Cahill got in touch with Emrick and the William James Association, which helps fund the arts in prison work, recordings, and information; and by last week, she was arranging delivery of a piano from a store in San Rafael for Friday’s performances, which she hopes will be the first of more to come. She’ll play Cowell’s revolutionary Rhythmicana, Celtic Set, Hilarious Curtain Opener and Ritornelle, High Color, and selections from the Amerind Suite, while the Ives Quartet will perform Cowell’s renowned United Quartet and more.

Cahill hopes that the concert will do more than entertain — she wants to reclaim Cowell’s reputation, and recover the music he wrote at San Quentin. “Those four years of Cowell's life and work are often overlooked because they're perceived as being shameful,” she notes. “When you read a bio about him, it will go into great detail about the years before and after, but then there will be one line saying ‘He was in San Quentin from 1936 to 1940 on a morals charge.’ But there are so many good reasons to study that music and listen to it and make it better known, and maybe cast a different light on it than the shamefulness that's been overshadowing it all these years.”

(A limited number of tickets are available to the public. Contact Laurie Brooks, executive director of the William James Association Prison Arts Project at [email protected])