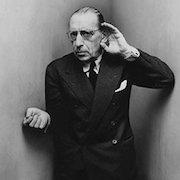 As was his habit when at home, Igor Stravinsky played cards. Solitaire and other solo games. Placing queen on king or five of spades on six, he’d pause, abruptly lifting his hands to make motions as if playing piano in midair. Fingers darting, eyes gleaming, and face averted on a spectral keyboard floating in space, it was a concert only he could hear.

“The chance to see someone, to watch somebody at work when they’re not conscious of somebody watching them, you see things,” says San Francisco Symphony Music Director Michael Tilson Thomas. “I was often up at Stravinsky’s house for rehearsals. I don’t know how it affects how I feel about and conduct the music, but I know it’s important.”

Sharing the recollection in an interview, Tilson Thomas says the memory of Stravinsky’s “air play” and other occasions he had to observe or interact with the composer, conductor, and pianist inform his approach to the symphony’s two-week Stravinsky Festival at Davies Hall.

The concerts feature Stravinsky’s ballet The Firebird and the “melodrama” Perséphone during the first weekend. The festival continues with two more ballet scores, Petrushka and Le Sacre du printemps (The Rite of Spring) and the Violin Concerto that, in 1941, was used by choreographer George Balanchine in his ballet Balustrade. To extend the offerings and expand understanding and appreciation of Stravinsky’s life and the times in which he worked, the festival offers an art and history exhibit, screenings of a PBS television series, pre-concert lectures, and a unique partnership with Bay Area-based performance arts organization Art Haus, which will include pre-concert music and dance performances.

On the stage, Tilson Thomas will be channeling music he says is personal, a deeply embedded part of his musical origins. “Although these three pieces, Firebird, Petrushka and Rite of Spring, have enormous, exotic, iconic positions in music, for me, they were home pieces. I grew up in a Russian-Jewish family, so they were familiar to me.”

His grandmother often sang some of the folk tunes found in Petrushka. “She sang them as forfeiture, as part of a complicated card game. When you lost, you had to crouch beneath a table and stand on one leg and sing, crow like a rooster. Of course, it was very difficult. I managed it because I was a young boy—and she could, because she was very small — but still, it was nearly impossible to do.”

Equally impossible is explaining the specific approach that will keep Firebird’s operatic, Rimsky Korsakov-like melodies sounding sumptuous, but also in its quiet sections, capture the ballet’s sacred, subtle, and pure profiles. Even more difficult to articulate are the means Tilson Thomas uses to prevent the angular, textural Petrushka from losing its folkloric drive and becoming abstract or cold. Rite of Spring includes jarring musical gestures during a scene of sacrifice, but at other moments must be joyous, light, and celebratory. Perséphone, written when Stravinsky was overwhelmingly in love with his vivacious, charming second wife, is elegant, flirtatious, tremendously lyrical. “There are a million things I do as a conductor related to balance, rhythm … I can’t possibly list them all. It’s simply what I do,” he says, about conducting the diverse repertoire of a composer whose mission Tilson Thomas says was to be “a universal genius mind” and never to be pigeonholed.

Yet there are influences he identifies as integral to the festival’s success: He mentions the quality of the soloists in Perséphone (tenor Nicholas Phan and narrator Leslie Caron are guest artists) and violinist Leonidas Kavakos, who will perform the Violin Concerto. More than anything, he says the orchestra’s long-term investigation and understanding of Stravinsky’s works allows them to perform “the width, the charm, the swing of them.”

Returning to memories, Tilson Thomas was about ten years old when he first saw Stravinsky conducting an orchestra. “This little, hyper man, was a wonder. He was like a super windup toy and conducted with animation, no matter the size of the orchestra.”

Years later, attending rehearsals in Los Angeles and eventually playing in the concerts, Tilson Thomas drew benefit from hearing Stravinsky sing sections of the score. The conductor would ask musicians to discover different shapes in the music, to find purpose and character in each note, to maximize the quality of sound, be it caressing, aggressive, or otherwise. “He was very elegant. He spoke precisely and with great sophistication about what he wanted. All the phrases were to be very turned out, very gestural, as if choreographed.” To that end, Tilson Thomas says his primary task in leading the musicians is “to encourage the orchestra to play with as much courage and freedom and personality as possible.” That, he concludes, “is something to achieve.”

S.F. Symphony Marks the Long Arc of the MTT-Stravinsky Connection

Trumpeter Sean Jones and a band of all-stars explore cross-cultural currents in this centennial presentation for S.F. Performances.