Marking the 100-year anniversary — to the day — of the premiere of Igor Stravinsky’s L’Histoire du Soldat, (A Soldier’s Tale) at the Lausanne Municipal Theater in Lausanne, Switzerland in 1918, San Francisco Performances is presenting it as the centerpiece of the their 39th Season Gala on Friday, Sept. 28, at the Herbst Theatre in San Francisco.

S.F. Performances President Melanie Smith says the idea to do this piece came from trumpet player Sean Jones, a current artist-in-residence. A well-known jazz player, educator, bandleader, and composer, he has an impressive list of credits, including several years as the lead trumpet player for the Jazz at Lincoln Center Orchestra under Wynton Marsalis, who tapped Jones to play on the 2011 “Tribute to Miles” tour along with Wayne Shorter and Marcus Miller. 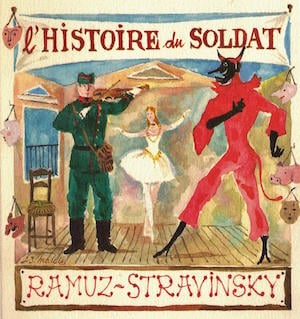 “I play both classical and jazz music,” said Jones by telephone in a recent interview. “And since I am in residence with S.F. Performances, I thought it would be nice to sort of tow the line and do both.” Jones says that he discovered Stravinsky when he was in school and was fascinated with his orchestral works. “I just dove further into his music, and this is one of the pieces that I love.”

L’Histoire du Soldat, a Faustian tale based on a Russian folktale, tells the story of a soldier who unwittingly sells his soul to the devil. Written near the end of World War I, the original production included a small ensemble of seven players, three actors, and a dancer. This performance, a concert version of the original, has been pared down to include just the seven musicians and a narrator.

“Stravinsky was writing at the time when jazz was just formalizing in this country,” said Melanie Smith, President of S.F. Performances, by telephone. “So his own music plays with rhythms and tonalities and chords that reference that.” And because Jones is primarily a jazz player, they decided to put together an ensemble of mostly jazz musicians, including Grammy Award-nominated violinist jazz Regina Carter, a former and soon-returning artist-in-residence.

The original dialogue, written for several players, has been condensed for a single narrator, and will be performed by tenor Nicholas Phan, (also an artist-in-residence) who will be in town that week for performances of Stravinsky’s Perséphone with the San Francisco Symphony, as part of their two-week Stravinsky Festival.

Along with Jones, Carter, and Phan, the ensemble includes Aneesa Strings on double bass and Robin Eubanks on trombone, both jazz musicians, along with Jeannie Psomas on clarinet, Patrick Johnson-Whitty on bassoon, and Justin Sun on percussion. It will be conducted by Valérie Sainte-Agathe of the San Francisco Girl’s Chorus, who Smith says can “swing for sure.”

The story centers on a Russian soldier on leave, heading to his hometown. As he rests by a stream, he takes a violin out of his pack, and begins to play. Disguised as an old man, the devil appears, and talks the soldier into trading his violin for a book that he claims contains unlimited wealth. As would be expected from any story about a bargain with the devil, things ultimately do not end well for the soldier.

“I like the story a lot,” says Jones. “It is the story of humanity — its rises, and falls, and idiosyncrasies. And I like the complexity of rhythm. I love the fact that he can make the sound extremely dense without using an orchestra, but with a smaller ensemble. It shows his genius as an orchestrator.”

“I think it is quite relevant to our times,” says Smith. “It’s definitely a Faust story and a morality play and is really about the illusion of greed and power and how ultimately that’s not satisfying.”

Smith says that she doesn’t want the audience to leave on a low note, so there will be an upbeat encore, with all of the jazz artists playing together.

“It’s kind of fun that we have this all-star lineup of jazz musicians,” says Smith. “And what better way to showcase our artist-in-residence program than by having current and former artists in residence on stage together.”

Shrinking Stravinsky Without Sacrificing His Rite

Christian McBride, the Face of the Bass, Goes Classical for a Night

A pick-up quintet of great classical musicians joins McBride for Dvořák and Schubert at SFJAZZ.