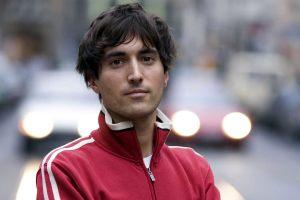 Lisa Petrie on May 11, 2009
America can’t get enough of Mason Bates, the young alchemist who blends the sonority of traditional ensembles like the symphony orchestra with the limitless possibilities of computer-generated “electronica.” It’s almost as if we’ve been waiting for just such a sorcerer to put a bit of groove in our Grieg, to mix up our Messien, to bring something fresh and transformational to the concert hall. This isn’t your grandpa’s orchestra. Plus, Bates' novelty is paired with Prokofiev's Second Piano Concerto, with youngster Yuja Wang on the bench.

On Wednesday, May 20, and Friday and Saturday, May 22-23, the San Francisco Symphony unveils Bates’ pithy new work  The B-Sides, commissioned and conducted by Maestro Michael Tilson Thomas. The work amalgamates Bates’ mastery of symphonic composition and his active career as DJ Masonic, mixing and spinning dance music in techno clubs, modern art museums, and art spaces. The B-Sides refers to Bates’ concept of the more alternative, edgy songs found on the flip side of a popular album, and serves to unify the five short movements.

Bates, who will trigger the electronic elements on his laptop from the percussion section, describes the piece as five sound environments based on texture and groove. The first section is “Broom of the System” and utilizes an actual broom in its pulsing rhythmic soundscape. The second, “Aerosol Melody (Hanalei),” is a purely acoustic evocation of the Northshore of Kauai and the softly undulating sea. “Gemini in the Solar Wind” is an example of how Bates uses electronica elements as “more than just a dance beat.”

He says: “Electronics add a totally different acoustic to the orchestra, such as the low sound of a subwoofer. In the case of this movement, I’m excited about the addition of voices, actual samples from the 1965 Gemini IV Voyage given to me by NASA. These are sounds you could not otherwise produce from an orchestra.” The fourth movement “Temescal Noir” (after the Oakland neighborhood) does not use electronics but adds a typewriter and an oil drum to the percussion section. Finally, “Warehouse Machine” is what Bates describes as “an all-out tribute to Detroit techno.” Hear this last movement‘s trial run at Carnegie Hall on April 15 by the YouTube orchestra, also the brainchild of MTT.

The B-Sides is one in a series of successful commissions by this prolific young composer. In March Bates presented the premiere of his new work Sirens with Chanticleer, and a new work for the California Symphony where he is Young American Composer-in-Residence. His Music from Underground Spaces was premiered by the California Symphony in May 2008. Other recent projects are almost too numerous to mention. Liquid Interface was commissioned by the National Symphony Orchestra and conducted by Leonard Slatkin at the Kennedy Center and later in Carnegie Hall. In the past five years he’s received commissions from notable orchestras such as The Juilliard School (celebrating its 100th anniversary in January 2006), the Los Angeles Philharmonic, and the American Composers Orchestra in New York.

When Michael Tilson Thomas became aware of Bates’ music in 2007, he invited him backstage during intermission at Davies Symphony Hall to discuss the possible commission. During that short break in the concert the concept was born. Mason was thrilled to work with a conductor who is also a composer, and with musicians who are friends of his.

Bates is also excited about his DJ project Mercury Soul, which he says “superimposes a techno dance party on classical music”. He and a creative cast together with conductor Benjamin Shwartz present this extravaganza on May 28 at San Francisco’s Mezzanine. (Visit www.mercurysoul.org for more information.) Get a taste of this project at the Symphony’s “Davies After Hours” party, Friday, May 22, after the concert, free to all concertgoers.