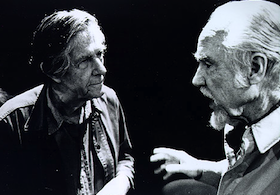 Born 100 years ago last week, on Oct. 27, Conlon Nancarrow was a maverick among American mavericks. Exiled by his leftist politics to Mexico after 1940 — he joined the Communist Party and fought for the loyalists against Franco’s fascists in the Spanish Civil War — where he labored in obscurity for decades, writing music so innovative that it wasn’t playable by humans then. So, in those pre-synthesizer days, he obtained a player piano and manual punching machine and often spent months painstakingly punching out the notes of a single piece on paper rolls. Using everything from jazz harmonies to Bach-style canons, he created music that used complex rhythms and combinations that no single human player could handle.

Yet with a few exceptions, such as Merce Cunningham, who choreographed one of his pieces in 1961, hardly anyone noticed until Nancarrow was in his 60s. Advocates like Peter Garland (who published his scores) and Charles Amirkhanian, who journeyed to Mexico in 1969 to find Nancarrow, persuaded record companies to release recordings of his music, and finally helped bring him back to the U.S. for a major festival appearance. Those, in turn, led to further tours, opportunities to compose for conventional instruments, and eventually international recognition (including a MacArthur “genius grant”) By the time of Nancarrow’s death in 1997. Today, his music is played and recorded even by well-known performers such as Bang on a Can All Stars, Alarm Will Sound, and Kronos Quartet.

This weekend, Amirkhanian’s organization, Other Minds, celebrates Nancarrow’s centennial and legacy. Amirkhanian, Garland, the great American scholar-critic-composer Kyle Gann (author of the definitive 1995 book The Music of Conlon Nancarrow), the composer’s widow (Yoko Sugiura‐Nancarrow) and others will discuss Nancarrow’s life and music. Another MacArthur winner, the German-born, Seattle-based sound sculptor Trimpin (who helped rescue some of Nancarrow’s music years ago by transferring the punch card info to a primitive Macintosh computer) will “reanimate” a wall of percussion instruments from Nancarrow’s Mexico studio. New York’s Bugallo-Williams Piano Duo will play transcriptions of Nancarrow’s player piano studies, Los Angeles’s Calder Quartet will play two of his quartets, English pianola master Rex Lawson will perform some of the composer’s celebrated studies. The festival also includes films about Nancarrow and music by other composers who influenced him or were influenced by him, including Bartók’s String Quartet No. 5, excerpts from a pianola version of The Rite of Spring, Thomas Ades’ The Four Quarters, and music by Rachmaninov, Percy Grainger, and more.

Nancarrow needed the player piano to realize his futuristic vision, says Amy Williams of the Bugallo-Williams Duo. “His ideas and his medium were so original that he wasn’t limited by human beings in any way, so he was able to take his musical language to a completely original level.”

Those ideas proved to be ahead of their time. “There are so many composers now who have taken a cue from Nancarrow to compose music in which melodies are running at different speeds at the same time,” Amirkhanian explains. “He’s made it part of the composer’s arsenal now. There are a lot of ways to do that with computer technology today, of course, but he had the equivalent of an abacus.”

He lists inheritors including Gyorgy Ligeti (who heard one of the first Nancarrow albums and became a vocal proponent of the American’s work in Europe), Gann, Steve Reich, John Adams (especially his Grand Pianola Music and Century Rolls), Ades and younger composers like Dominic Murcott (who has arranged major performances of Nancarrow’s music in London and will premiere his orchestration of Nancarrow’s Piece for Tape at Other Minds), Paul Usher, Robert Willey, and more.

For all his innovation, Nancarrow drew on familiar precedents that provide points of entry to listeners unfamiliar with his music. “He’s both a maverick and part of a tradition,” Williams says. “With a lot of the pieces we’ll play you can hear his connection to Bach (especially his counterpoint), Bartók, Stravinsky.

“There are so many composers now who have taken a cue from Nancarrow to compose music in which melodies are running at different speeds at the same time. There are a lot of ways to do that with computer technology today, of course, but he had the equivalent of an abacus.” - Charles Amirkhanian, Other Minds

So it’s both original and not without precedent. It makes you look backward and forward at the same time.” And in the era of digital technology that allows us to conjure up sounds that no humans could make, it may be that Nancarrow's artificially produced music is more relevant now than in its own time.

Nancarrow recorded his studies on player pianos prepared with tacks and other devices to produce a dry, harpsichord like sound, says Amy Williams. “We play them on Steinway grand pianos, and not only do you get a different, beautiful sound, but we’re able to interpret them like human beings to bring out the jazzy, playful, lyrical qualities, so people can hear them in a fresh way. They respond to them well because it’s not mechanical.”

In fact, Amirkhanian says, much of Nancarrow’s music, even the most complex, is actually quite listenable, because the composer was a master at making his processes audible, for example by cleverly placing each of a dozen melodic lines (in his Study #37) in a different range of the piano’s audibility. “It wasn’t a casual use of an experimental idea,” Amirkhanian says. “He was as fully confident in what he did as Bach and Mozart were.”

Despite the technical challenges of playing music that wasn’t written for human hands (Nancarrow himself was a jazz trumpeter, not a pianist), nor limited by them (his glissandos, for example, can use black and white keys), it inspires performers and therefore audiences. While “it feels different than music written for pianists, it also has many layers that keep the music fascinating for us,” Williams says. “In that sense, it’s the same as playing Brahms or Mozart. We keep finding new things in it.