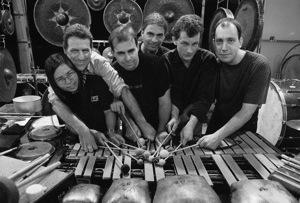 Percussion, the great Scottish percussionist Evelyn Glennie once told me, is the instrument of the 20th century. And San Francisco has a fair claim to being the wellspring of percussion's emergence, for it was here that, beginning in 1938, at the instigation of their teacher, Henry Cowell, the maverick young composers Lou Harrison and John Cage contrived the first percussion ensembles in the Western classical music tradition, employing instruments from junkyards such as brake drums and flower pots, as well as gongs, woodblocks, and other instruments from shops in Chinatown. Their compositions spawned a long and fruitful tradition of American percussion music. Meanwhile, Europeans were developing their own, less prominent percussion tradition.

On March 13, percussion fans have two opportunities to learn when the two traditions began, how they developed, and maybe where they’re headed. Unfortunately, as the two events take place on both sides of the San Francisco Bay simultaneously, starting at 3 p.m., you can only choose one. Cal Performances’ event takes place in Berkeley at Hertz Hall, while the Morrison Artists Series event will be given on the San Francisco State University campus.

Now celebrating its first half century, Les Percussions de Strasbourg is probably the oldest continuing Western percussion ensemble. Although none of the original members survive, the group continues to play music from throughout its history, including many works that European composers have written for it. “The European percussion tradition is based in the classical tradition — Stravinsky’s L'Histoire du soldat and Bartók’s Sonata for Two Pianos and Percussion,” explains the ensemble’s Olaf Tzschoppe, “whereas the American percussions tradition starting with John Cage and Lou Harrison came out of nowhere, outside the classical circus.”

It may have appeared that way from Europe, but in fact, the American percussion tradition starts with Bay Area composer, teacher, and new music advocate Henry Cowell, who, in his works and in those of students (like Cage and Harrison) he encouraged, synthesized three different streams: modernism (from French American composer Edgard Varèse), Latin American nationalism (Cuban composers Alejandro García Caturla and Amadéo Roldan, whose 1930 Ritmica No. 5 and Ritmica No. 6, both inspired by then-popular Latin American nationalism and his country's Afro-Hispanic heritage, were the first percussion ensemble works in the Western tradition), and dance (the Wigman school's use of percussion in dance performances). A common source is Varèse, who lived in New York from 1915 till his death in 1965, and wrote the short but revolutionary Ionisation there in 1931, which impressed Cage when he heard it at the Hollywood Bowl in 1933. But the young Americans took percussion in new directions. “Harrison and Cage were inventing new things, using woodblocks and brake drums and Asian instruments not so common in Europe then,” Tzschoppe says. “Varèse was coming out of a more traditional way of writing, using things like snare drums.”

Along with Ionisation (arranged for percussion sextet), the Strasbourgers will play one of the group’s early triumphs, Japanese composer Yoshihisa Taïra’s Hierophony 5, which draws on traditional Asian music and incorporates a wide dynamic range, dramatic cries, and metallic sounds. Selections from Book of Keyboards (Le Livre des claviers) by French composer Philippe Manoury, who now teaches at UC San Diego, employ vibraphone, marimba, and sixxen, a special instrument contrived for the group by the great 20th-century Greek composer Iannis Xenakis. Tzschoppe describes the most recent work on the program, Raphaël Cendo’s 2008 Refontes for percussion and electronics, as being noisy and powerful, part of that strain of contemporary French music that focuses on orchestral color. The prize-winning American composer Edmund Campion’s Ondoyants et Divers explores the rhythmic side of small instruments — cymbal, triangle, Japanese bowl, tam-tam, and woodblock. Born in Texas, Campion studied at the Paris Conservatory and now teaches at UC Berkeley.

Tzschoppe sees the distinction between European and American percussion traditions fading, as younger musicians around the world have grown up hearing some of the same rock and other pop music and global sounds. “Now everybody has an iPod,” he notes.

Instead of the oldest percussion group, you can see one of the newest, the three-year-old LAPQ, whose program complements the Strasbourgers by focusing more on American music while also containing one of the seminal percussion works: Cage’s big, thrilling Third Construction, which uses such exotic instruments as teponatzli and tin cans, cricket callers and quijadas. They’ll also play one European work, Xenakis’ 1989 Okho, a trio for djembe drums.

With young composers like these finding new territories to explore, it seems that percussion isn’t only the instrument of the 20th century, but also will continue to exert a strong beat in the 21st.