You can’t stop love. From the love of resurrected operas to that of two young lovers, Ermelinda and Ormindo, the forces of passionate pursuit unite in Ars Minerva’s presentation of composer Domenico Freschi’s Baroque-era opera, Ermelinda Nov. 22–24 at ODC Theater. With a libretto by Francesco Maria Piccioli (also the librettist for the company’s 2016 revival of The Amazons in the Fortunate Isles), the opera, commissioned by Marco Contarini, Procurator of St. Mark’s and second in command in the Republic of Venice, premiered at Contarini’s grand country estate, in 1680.

In the intimate opera set in ancient Phoenicia, 16-year-old Ermelinda is separated from Ormindo by her nasty, tyrannical father and others seeking to quash their relationship. Employing intelligence, deception, planning, charm, and precipitous action, Ermelinda navigates determinedly to achieve her goals. Although a young girl in 1680 would, on the surface, represent a powerless character, Ermelinda defies circumstances and challenges social misconceptions about female frailty. In lockstep with heroines in Ars Minerva’s previous revivals—Cleopatra, Circe, Clytemnestra, and more—Ermelinda reigns over men and most women in matters of the heart.

“Ermelinda’s witty, bright, and tries to see how things can be on her side, how she can get her way,” says Ricci. “Her father, who is very fanatical, is extreme in the way he wants his daughter to be submissive. She has to navigate between two men and a woman who are always trying to lock her feelings or steal her lover. What I like is that each time she has a plan, the guy who loves her always listens to her. She’s always the one who builds: he’s the follower.”

Ricci says the sheer fact that Ormindo agrees with Ermelinda without question means he admires her most for her intelligence. “When she has an idea or plan, he just says ‘yes,’ so it’s refreshing.”

With no grand arias to showcase a singer’s prowess, the vocal challenge becomes to achieve nuance, emotional resonance, and intimacy. “It is more as if you are nude in front of the audience,” says Ricci. “You have to be a great actor, and the language is Italian that has some Venetian [dialect]. Because it’s a comedy, you have to have the rhythm of it to make the humor come out and transmit all they have to say in a relevant way for today.”

The demand on the six-instrument orchestra is similar. To be precise, pure in style, and avoid exaggeration, Ricci says the singers and the orchestra must “be like an elephant in a china shop: quick-thinking and also exceptionally careful.”

Which is not unlike Ermelinda as she charts a precarious course leading to reunification with her lover. Ricci envisioned the opera set in a place impossible to visit other than in the imagination: A Baroque/Middle-East crossover land. The projections, designed by Nicole Spencer Carreira, are based on stage designs available for the first time in the company’s history, according to Ricci.

In her role as Ermelinda, Ricci says Printz’s flexible, warm voice leads to arias sung with freshness, as if performed new every evening. “She can sing one aria 10 times but finds something every time she repeats. Giving different perspective to the audience, she’s a master or her technique and applies it to every sentence.”

Printz has a sideline hobby as a static and dance-trained trapeze aerialist, offering a desired physicality. “I wanted someone for Ermelinda who could sleep on the floor, be physical, be free, get closed in a cage made of petticoats, do things a ‘lady’ wouldn’t do,” says Ricci.

Likewise, Couden’s contralto is the perfect low range and dark color for portraying a male role. “She’s also very tall,” Ricci says, admittedly succumbing to one gender cliché, but adding: “When I saw her playing Penelope at West Edge Opera, she was very moving, touching, and intense.”

As always, Ars Minerva will remain true to the original music. Innovative staging and modern costumes swing the production into contemporary times, as does the lack of Baroque hand gestures typical of 17th-century operas. “Those gestures come also with each word — there are whole books on it — but we don’t have those. I’ve seen reconstructions that are beautiful ... and sometimes the audience doesn’t react well to [them],” says Ricci. Given a modern frame, captured by centuries-old and new traditions and a powerful female protagonist, love remains as it has always been: a mighty, unstoppable, timeless force. 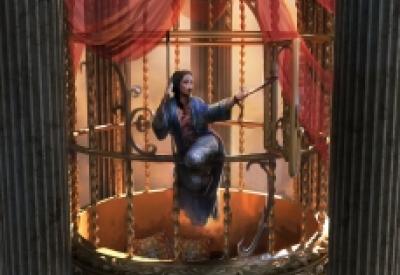