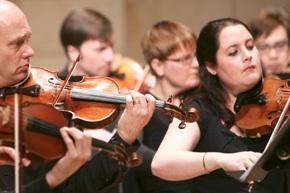 A Rainbow of Promises

Minority groups have the unenviable task of celebrating their uniqueness while demonstrating that they
have a great deal in common with everyone. Small wonder, then, that classical music and the LGBTQ community found each other. The partnership displays its accomplishments again on Sept. 25 at the San Francisco Conservatory as the Bay Area Rainbow Symphony (BARS) opens its 2010-2011 season with the ever-popular Tchaikovsky Piano Concerto No. 1 (with Daniel Glover as soloist) and Rimsky-Korsakov’s Scheherazade.

Late in 2007, five musicians, in fine San Francisco tradition, saw a need and fulfilled it: “What we had in S.F. by way of LGBTQ [lesbian/gay/bisexual/transgender/queer] music groups was wind instruments and a couple chorus members, but we never had anything with string players,” says Ian Harwood, BARS’ executive director. “We wanted to start an organization that combined instrumentalists. At the same time, we wanted to change the model for how an orchestra functions. As a tuba player, I would always joke that I know everybody in the orchestra because I see the backs of their heads, but we never interacted. One thing that was always very strong with LGBTQ groups is the social element.”

When Daniel Canosa attended BARS’ maiden concert in summer 2008, the ensemble, which gathered at Old
First Church for the event, consisted of a few strings and winds. By the time Canosa was invited for a trial run as conductor, BARS had grown into a full-fledged orchestra. After he was appointed artistic director, it quickly became clear that his instinct for community fit well with BARS. “I wanted to spend the first two years doing repertoire that the musicians and the audience would relate to,” says Canosa. “Now, I’m a little bit freer to make decisions on my own, but I didn’t want to start with pieces that weren’t familiar.”

And surely establishing a voice for the LGBTQ community is important? Yes and no. Harwood laments that “a lot of people think of LGBTQ music as Broadway musicals, ‘jazz hands,’ and [feather] boas.” What people don’t realize is that “there’s a really strong tradition of gay classical composers and performers that date back throughout music’s history. We think about Copland and Bernstein, Tchaikovsky and Schubert. In time, one of our goals is to showcase LGBTQ music and composers and performing artists and say that these individuals are part of our community and they have this wonderful story to tell.” Canosa ensures that there is an LGBTQ composer featured in every program. The purpose, though, is not to reclaim ownership but to reach out — at the San Francisco Pride Festival, Oakland Pride, the Castro Street Fair, and any of the other numerous LGBTQ events at which BARS volunteers, as is expected, but also to those whose only memories of classical music come from Looney Tunes.

Ultimately, says Canosa, “The main point for me as an artist is the moment in your day where you go and experience something and you remember something you forgot. It’s why I do music.” The warhorses in BARS’ repertoire have gotten loyal listeners in the door. After two successful seasons, BARS is ready to be more daring with its power as a tastemaker. For instance, the orchestra played Sibelius’ Symphony No. 2 last spring to a rave audience response; Bruckner and Stravinsky may not be far behind. Canosa would particularly love to work with the arts outside of classical music, including pop music, ballet, cinema, and even the hot New York City band Antony and the Johnsons. “We all grow up with many different forms of music. How can you not want to collaborate?” he wonders. Being identified as inseparable from a minority label for so long has encouraged the explosion of labels altogether. Classical music has been dragged in this direction for years; BARS shows us how the migration can be made happier.