When San Francisco’s War Memorial and Performing Arts Center opens all four of its stages at noon on Sunday, March 20, it will be a long-awaited celebration, free to the public, of the COVID-closeted diversity of musical expression in the Bay Area. In accordance with policies updated earlier this month, proof of vaccination won’t be required for entry, although masking will be recommended. Over the course of this seven-and-a-half hour, fourteenth annual SF Music Day, hosted by the nonprofit InterMusic SF, more than 25 small ensembles will showcase what InterMusic Executive Director Cory Combs refers to as “artistry that’s not necessarily genre-bound.”

For Combs and for audiences, it’s a welcome return after a year without a Music Day, which followed an online streamed presentation in 2020. Throughout the pandemic, InterMusic struggled to sustain its funding from foundations and individuals, while at the same time maintaining its ongoing Musical Grant and Affiliates programs and partnering with Theatre Bay Area and Dancers’ Group to fundraise and distribute $600,000 to artists struggling with diminished performance opportunities.

Music Day also presents a personal opportunity to Combs, in his role as a bass player who’s worked with the likes of jazz legends Joe Henderson and Clark Terry. “I’ve kept performing as part of my identity, but I don’t necessarily say yes to everything,” says Combs, in a phone chat from his San Francisco home. “I look for opportunities that are going to be musically engaging and challenging for me.” He found this with composer and saxophonist Rent Romus, who has presented at two previous Music Days and this time will premiere his Itkuja Suite [pronounced, ‘It-koo-ya’], with a 10-piece ensemble that includes Combs and Safa Shokrai on two double basses. “Rent seems to understand, through some things I was sharing on Facebook, that I’m an improviser by background,” says Combs, who’ll also be releasing a duo album with his wife, violinist Kayo Miki, later this year.

The Itkuja Suite is an extension of Romus’s exploration of his Finnish roots, which included his reading of the Kalevala, Elias Lönnrot’s 1835 collection of narrative poetry based in the folklore and mythology of the Karelian people of northern Europe and considered by some to be the cultural foundation of Finland, which became a nation in 1917. The oft-translated book portrays the adventures of ancient shaman-heroes, who evoked for Romus his love of the science fiction epics of Frank Herbert and Phillip K. Dick, both inspirations for his compositions.

“My mother and father [who brought him up in Milpitas] were not really informed too much about their culture, but my grandmother was born in Finland and spoke Finnish, and what she instilled in us was, ‘never forget that you’re Finnish,’” relates Romus, over a dinner on the way to a gig at the Bird & Beckett bookstore. It wasn’t until the 1990s, after attending UC Santa Cruz and founding several avant-garde jazz ensembles and his own Edgetone Records label, that Romus turned to a serious study of his ancestry.

“I toured Denmark in ’95 with a very well-known drummer, Stephen Pasborg, and the Danes were playing Danish folk songs using jazz,” he says. “And all of a sudden, it was like a spark came over me! I started getting into Sibelius, and I actually arranged a couple of his pieces. Sibelius had used the Kalevala as a sociopolitical tool to develop national identity and to revive Finnish folk tunes in the classical world. And I think he was berated by all of his classical music compatriots for this.”

In the late ’90s, Romus made his way through the Kalevala, “and I started composing original pieces to some of the stories, and telling people on the improvised jazz scene that I was doing this.” He was introduced to Heikki Koskinen, an older Finnish-born composer and instrumentalist living in San Francisco who has become a close friend and is the co-composer of the Itkuja Suite. Koskinen, in turn, introduced Romus to recordings of Finnish free jazz, which “wasn’t like European free jazz, intellectual and delicate; it was closer to American free jazz, punching right through the wall.

“And all of a sudden, the doors started flinging open,” Romus continues. “I found out there’s a Finnish Hall, in Berkeley [at Chestnut & University], where there used to be a ‘Finntown,’ with all these Finnish nationals in their 60s, 70s, and 80s, and they welcomed me with open arms.” Romus continues to perform at the Hall, “but with the Finnish music I’m doing, my focus is to pay homage to that culture. I need to not take liberties to the point that it would insult someone, though I still do have this need to push the envelope.”

Nonetheless, “the deeper I’ve gotten into the [Finnish] culture and the music, the more I’ve realized that all the music I’ve ever done or composed has had some kind of connection to these cultural values,” says Romus. The Itkuja Suite is named for a form of millennia-old lament which effects community healing and embraces both sadness and happiness, not unlike the Brazilian/Portuguese concept of saudade, but sunnier. “Some cultures have this word to express the need to persevere, no matter what,” Romus points out.

The laments evoke for him both Indian classical music and free jazz. “They have a register and structure, but you’re improvising at the same time. The lamenter can modulate, change the length of the melody, change pitch and tone, and still fit within the expected register of what the lament is supposed to be all about.”

In rehearsals, Romus has realized that the challenges of the material have “screwed up my fellow musicians a little bit. The solo sections are in six or nine bars, or I may add two bars to a melody line. So they’re expecting it to end at a certain point, and it doesn’t. But it’s very similar to how a Finnish person would lament in olden days.”

As a member of the Life’s Blood Ensemble, performing on Music Day at 5:15 p.m. in the Taube Atrium Theater, Combs is up for the challenge. “What I like is that Rent is taking a theme of mythology and history and putting it in front of us in both a composed and improvised manner,” says Combs. “And there are indications in the composition where he wants us bassists to create sounds that emulate boats creaking, nets being cast, or small birds chirping. Not everyone in his ensemble is coming from the same type of background, but everyone is coming in with open ears. Rent’s music is hard, but very playable; he’s struck a great balance.”

On April 19, at San Francisco’s Make Out Room, Romus will showcase other portions of the Itkuja Suite, including a lament for refugees of Karelia, an ethnic region sundered by war with the Russians in 1940. He looks forward to possible post-pandemic revivals of his series at the Musicians Union Hall and/or the Luggage Store.

Although the Itkuja Suite is the only world premiere as such scheduled for this month’s Music Day, Combs points to many first-time surprises, some involving familiar musicians in unfamiliar aggregations. Many but not all acts have been funded over time by InterMusic’s Affiliates or Musical Grant programs. But “I do always try to get some folks that are new to Music Day,” he says. “Nora Stanley is a great saxophonist I got to know when I was at SFJAZZ and she was part of the High School All-Star big band. Gaea Schell is a pianist and flautist and composer, this is her first time on the roster. Dan Flanagan has The Bow and the Brush, which will combine painting and sculpture with new music. Anna Maria Mendieta, who’s an Affiliate with a new recording, has a tango ensemble.” And there are many more, waiting to be discovered. 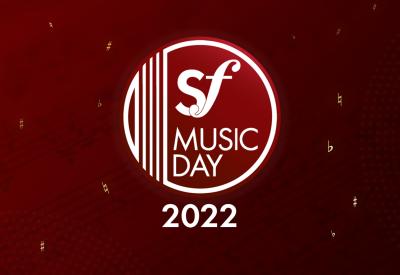 The annual event, which celebrates the diversity of the Bay Area musical community, examines Asian-American jazz for this year’s “Field Report.”

Now in its 12th year, the day-long, free festival presents a kaleidoscopic range of new-music ensembles and compositions.