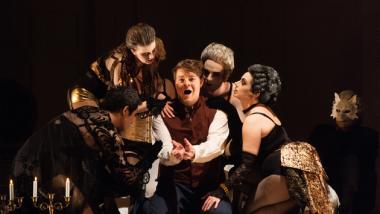 In The Rake’s Progress, Stravinsky’s 1951 neoclassical masterwork, a young innocent descends from dreamy idleness to dissolution to a somber reckoning with the realities of evil and mortality. As if in emulation of the opera’s deepening seriousness, the Merola Opera Program’s Summer Festival production at the San Francisco Conservatory of Music grew decidedly richer and more rewarding over the course of the evening. (A Saturday, Aug. 4 matinee followed the Aug. 2 opening night.)

In its final stages, played out in Eric Watkins’s bone-chilling light on Donald Eastman’s white pediment set, this Rake was at once stark, bleak, and empathically moving. As the Faustian contours of W.H. Auden and Chester Kallman’s superb libretto played out, the hero (tenor Christopher Oglesby as Tom Rakewell) made his final encounter with the demonic Nick Shadow (the commanding baritone Jacob Scharfman) grippingly real. Their high-stakes card game felt febrile and tense, owing both to the performers and a keen bit of staging in Robin Guarino’s sometimes static direction.

Then, his voice scoured and chastened into wonderstruck purity, Oglesby bid an aching graveside farewell to Anne Trulove (the refined soprano Meigui Zhang), the faithful lover he repeatedly betrayed.

Moments later, in the bright but implicating epilogue, the principals were all back on their feet, reminding us to beware love’s lures: “For idle hands and hearts and minds,” the moral goes, “the Devil finds a work to do.” So persuasive were the opera’s closing scenes here that the advice demanded present-day attention. No listener would want to go through these lovers’ wrenching miseries.

Throughout, conductor Mark Morash’s orchestra supported the singers and the action with a sensitive and responsive reading of the score. Musically, the spirt of this playfully allusive and emotionally varied work came across, whether in witty flyaway Mozart quotations, chortling brass asides, mournful string effusions, or the deftly woven ensembles that kept bursting into bloom. It was as if the sequence of Hogarth paintings and drawings that inspired the piece had been translated directly into notes and rests, flats and sharps, melody and harmony — all of it brightened with Stravinskian color and texture. The marriage of music and text is about as good as it gets.

Dramatically and theatrically, things got off to an uncertain start in this Merolini mounting. Bland and oddly remote in his opening scenes, Oglesby failed to capture either the gullibility or callowness that makes him such an easy mark for Shadow’s machinations. Zhang, lovely and affecting, was clearly too good for the undeserving patsy she adored. Later on, in a pensive and piercing aria after Rakewell has been spirited off to London for his plunge into dissipation, Zhang scored one of the high points of the production. Her voice, which took on a slightly caustic edge at times, was beautifully measured here.

Scharfman, an eerily still and self-assured manipulator, was himself a kind of visual Shadow, his sinister black cloak and henchman’s gloves (fine costumes by Christine Crook) set off by a long sheath of silver hair. His might and muscle came across vocally in potent, precisely articulated lines.

The evocation of the London demimonde proved sketchy. Guarino posed the “whores and roaring boys” of the Auden-Kallman book in studied tableaux vivants. Neither mezzo-soprano Anne Maguire’s Baba the Turk nor mezzo Alexandra Urquiola’s Mother Goose added much sparkle to the city’s bewildering pleasure dome. Tenor Addison Marlor, as a hyperactive auctioneer, made a more spirited impression. Oglesby never quite conveyed the crisis of corruption Tom falls into.

But when it came time for Shadow to collect on his debt, Oglesby made the most of his final scenes. The tenor proved once again that singers, especially young ones, may take some time to hit their strides. By the end of the night, he, Scharfman, and Zhang made The Rake’s Progress a story both dramatically immediate and musically enlarged. Drawn down toward the darkest pit, the principals shone once more in the epilogue. Their wisdom, to the last syllable, was hard-won.