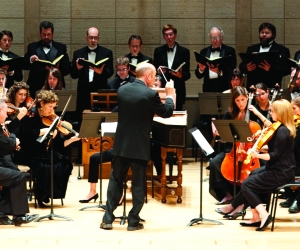 It was not long ago that J.S. Bach was most typically viewed as the earliest significant composer of the “common practice period,” the man who sowed the seeds of musical thinking for the next 200 years. While it is true that composers from Beethoven to Schoenberg explicitly looked to Bach as their artistic fount, it is more typical today to consider him as the culmination of a musical tradition (or several), a polymath capable of synthesizing various strands of 17th -century artistic activity and creating something unique and profound. The composers of Bach’s lineage, with the notable exception of Vivaldi, have hardly become household names: Biber, Schmelzer, Schütz, and others. Their instrumental chamber works, in particular, are found on programs by university early-music ensembles and are much beloved by period instrument groups, but who would be adventurous enough to program an entire evening of such music for a general audience?

The American Bach Soloists — that’s who. Each summer, ABS holds a Festival and Academy that includes concerts, lectures, and master classes. (Complete schedule here.) They kicked off this year’s festivities on Friday night at the San Francisco Conservatory with the Academy’s faculty performing chamber music by this old guard of German Baroque composers. And the results — particularly the foot-stamping and hooting audience — show that the wonder and excitement that this music engendered in the young Bach is not lost on listeners today.

It didn’t hurt that the ABS faculty had at their disposal two of the most accomplished violinists of the current early-music scene. Elizabeth Blumenstock is a frequent face on the Bay Area’s concert roster, yet audiences never tire of her fiery chops or consummate musicianship. She rallied the audience to attention with a scintillating performance of Johann Schmelzer’s Sonata No. 4, from his 1664 set for solo violin and continuo.

The wonder and excitement that this music engendered in the young Bach is not lost on listeners today.

The work is based on the descending tetrachord, which is a fancy term for something very familiar; if you know Ray Charles’ Hit the Road, Jack, then you know the descending tetrachord. Like that familiar tune and many jazz and blues standards, Schmelzer’s sonata is a display of just how much variety can be squeezed out of a very simple structural idea. Slowly unfolding harmonic progressions and lyric melodies eventually cede to explosive bursts of scalar passagework, which Blumenstock blazed through with prodigious skill. The audience’s response bordered on pandemonium.

Their approbation for Robert Mealy’s rendition of Heinrich Biber’s Sonata Violino Solo Representativa was equally ecstatic. Composed in the late 1660s, that sonata is an evocative (if somewhat silly) programmatic piece that imitates various animal sounds, in turn: nightingales, cuckoos, frogs, hens and roosters, quail, and cats; curiously, it ends with a musketeer’s march and allemande. On paper, the imitations are clear but hardly revolutionary: rapid trills for the nightingales, alternating thirds for the cuckoos, chromatic slides for the cats. But Mealy pulled no comic punches, eliciting giggles with his croaking frogs and, by the time his violin morphed into a howling cat, side-splitting laughter. Never have I heard this piece so effectively performed, and rarely have I seen a response so lively in any chamber music setting.

It was a fitting end to a rare and intelligently programmed concert of works that are unfamiliar for the average audience.

The concert was not only laughter and pizzazz. Baritones William Sharp and Max van Egmond teamed up for duets by Heinrich Schütz. These were drawn from his Kleine geistliche Konzerte and Symphoniæ Sacræ, collections from 1630s and ’40s that feature mixtures of Psalm texts, free religious poetry, and Lutheran hymns set for various ensembles. Like the later Passions of Bach, these are dramatic works based on what were then the latest trends in musical styles (that is, Italian opera and madrigals). It is also music of great depth born of true religious faith. Particularly touching was the performance of “Ich bin jung gewesen und bin alt worden” (I was young and have become old), which van Egmond, nearly an octogenarian, concluded with a wry smile. Perhaps he was pleased to signal that the years have not diminished the richly sonorous qualities of his lower range, the clarity and elegance of his presentation, or the warmth with which audiences receive him.

The evening closed with Bach’s concerto BWV 1044. Bach scored this piece for the same forces as his fifth Brandenburg concerto: violin, flute, and harpsichord soloists plus supporting band. Like that more famous concerto, this one features the keyboardist as the domineering soloist, including a meandering cadenza in the so-called stylus fantasticus (or fantastic style) in the work’s third movement. Unlike Brandenburg 5, BWV 1044 is a sober and serious essay, densely contrapuntal and cobbled together from keyboard works that Bach had written years before. The music is also nail-bitingly difficult for all involved, and the sonic results are challenging for audiences, too. This is Bach at his most demanding, and it was intriguing to watch Blumenstock visibly counting her rests, and to see the furrowed brow of traverso soloist Sandra Miller as she navigated her part’s labyrinthine chromaticisms. In lesser hands, this is sometimes a “turgid” piece (as one of Bach’s contemporaries criticized his work of this period). But the members of ABS are masterful, and they captured perfectly — for a rapt audience — the grandeur and intensity with which Bach imbued this piece. It was a fitting end to a rare and intelligently programmed concert of works that are unfamiliar for the average audience. The creative and spiritually rich music of Bach’s predecessors led logically to the towering masterwork that concluded the concert, reminding us that all roads truly do lead to Bach. And Bay Area audiences should count themselves fortunate to have ABS as a guide along those winding paths.