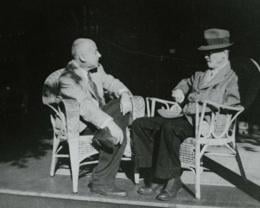 Brett Campbell on November 17, 2009
Lou Harrison called him “the central switchboard for two or three generations of American composers.” John Cage said he was the “open sesame” of American music. Yet Henry Cowell’s significance to American music remains unappreciated, even by most classical music fans. In his home state, Bay Area residents who recognize his name are unlikely to think that the Santa Cruz redwood forest is named for him, rather than, as it happens, for an unrelated lime/logging/land baron.

Last week’s two-concert tribute, “A Whole World of Music,” sponsored by Other Minds, aimed to rectify the musical Cowell’s relative neglect since his death in 1965. It wound up revealing the significance of the Menlo Park–born composer/theorist/editor’s role and of his music — while offering some reasons for his lack of recognition.

Thursday’s concert (see another review here) at the pastoral Valley Presbyterian Church in Portola Valley, a few miles from Cowell’s Menlo Park birthplace, opened with Anthony Brown whirling a thunderstick aloft, the Native American instrument creating a reddish halo while making a whoom, whoom thrum. Then cellist Hannah Addario-Berry’s cello joined in a mournful line. This Adagio movement from 1924’s Ensemble showed the 27-year-old composer in full “ultramodernist” guise, effectively using an instrument from outside the Western classical tradition. The cellist joined soprano Madison Smith, flutist Sarah Holzman, and pianist Sarah Cahill in 1938’s Toccanta, whose soaring vocalise and intertwining melodies sounded at once thoroughly contemporary and appealingly sweet. Ranging from cheery to hauntingly romantic to delicately Coplandish to propulsive, it would — attention, concert programmers! — sparkle on any current chamber program, and turned out to be one of this event’s prime (re)discoveries.

Cahill took the stage for a passel of solos, including one of Cowell’s most performed works, the surging Tides of Manaunaun, written when he was 14 and energized by the tone clusters that the composer invented and that, along with other innovative piano techniques, brought him worldwide attention. In Cahill’s sensitive hands (and forearms), this programmatic evocation of Irish seascapes and of other Cowell piano solos sounds, even today, like much more than a mere gimmick. Sometimes crouching over the instrument to reach the strings and pedals, the orange-clad new-music specialist coaxed evocative atmosphere from better-known solos like Aeolian Harp and other expressive teenage works, in the process making clear Cage’s debt to Cowell for the former’s prepared piano works.

Then, on Saturday night, Cahill played four more pieces, including the famous 1925 The Banshee (with percussionist Willie Winant serving as “pedal boy” while Cahill manipulated the strings) and the brilliant Rhythmicana, from 1938. After almost a century of experimental music, what stands out isn’t these trailblazing keyboard works’ extended techniques but rather their evocative lyricism. Some sound like Liszt with clusters — clearly the work of a young man, but, with one exception, not an angry one determined to overthrow the past or épater the bourgeoisie. Rather, Cowell seemed even in this period to embrace sounds both old and new, East and West, as did his student Harrison, whose many (and acknowledged) debts to Cowell were also evident throughout the evening.

Cowell’s eclectic esthetic worked against his achieving wider recognition. “Cowell was an immensely varied composer,” Cowell scholar Joel Sachs, who participated in the program, told me. “People often criticized him for not having developed a personal style, but he said that was exactly what he wanted: to treat each composition as an individual problem with its own solution.” That splendid variety — which made an overlong second night bearable — prevented the ever-restless Cowell from achieving a consistent profile, with identities ranging from young wild-man pianist to world-music maven to ultramodernist to Irish-American revivalist. It perhaps also kept him from developing any of his ideas as fully as his students and other inheritors did.

On both evenings, mezzo-soprano Wendy Hillhouse and pianist Josephine Gandolfi contributed sets of Cowell’s songs, which they’ve been instrumental in reviving over the past decade or so. Some were burdened by their musty Victorian texts (including several by Cowell’s father); the settings of contemporary lines by Ezra Pound and Catherine Riegger provoked more-interesting music, but even the nostalgic parlor works would spice a program of Romantic art songs without frightening away the blue-hairs. If art song had a hit parade, Cowell’s near-catchy 1944 setting of Robert Frost’s The Pasture would have topped the charts. Spanning the 1920s to early 1960s, the rarely heard songs exhibit Cowell’s interest in Irish themes and texts, and demonstrate how his ultramodern techniques could work expressively in many contexts, not merely as gimmicks for their own sake. Let’s hope Hillhouse and Gandolfi can get these recorded and send them off to Thomas Hampson (see interview) for his Songs of America project.

A Significant Work for String Quartet

The star of the first concert was Cowell’s 1936 United Quartet, persuasively performed by New York’s Colorado String Quartet. Like Copland and other leftish composers of the time, Cowell here was trying to achieve “a more universal music style” that could appeal to the blue-collar folks suffering in the Depression. Cowell’s masterful counterpoint, drones (which seemed to anticipate Alan Hovhaness's work), percussive effects, and other techniques draw from a wide range of influences, yet the piece sounds cohesive and at times even gorgeous. It should hold a prime place in 20th-century string quartet repertoire. Since so many of Cowell’s other works rely on nontraditional instrumental combos, this one and the piano music will likely represent his offbeat gifts to most listeners, and, as this concert showed, they’re up to the task.

The quality of the 1930s works throughout these concerts reveals just what a fertile patch Cowell had hit at this point in his career, which is fairly astonishing, considering his busy bicoastal life, his teaching duties in San Francisco and New York, his publishing ventures, and of course Cowell’s four-year San Quentin prison sentence on trumped-up sex charges (he was later pardoned).

The Colorado Quartet played Cowell’s brief 1916-19 Quartet Euphometric both nights (despite the length of the second concert, it helped to hear this elusive, Webern-meets-early-Copland experiment again), and it closed the second concert with his fifth quartet, which proved quite as accessible as the United — alternating between dreamy and up-tempo passages with big-hearted melodies drawn from early American music. Those sounds, which Cowell explored with increasing frequency and success over the last two decades of his career, informed much of the second evening’s fare.

Like his great predecessor and colleague Charles Ives (whose works he championed out of obscurity and who helped finance Cowell’s American music advocacy), Cowell was a master at blending such traditional American tunes with both new and modern techniques. You could really hear the shape-note harmonies of Cowell’s Hymn and Fuguing Tune No. 14 and his radiant 1945 Sonata for Violin and Piano, which is yet another piece that this festival proved deserving of inhabiting the standard chamber music repertoire, and whose trad-American inspiration would stir envy in both Copland and Virgil Thomson (who were pursuing similar directions around this time).

Unfortunately, one organ-fuguing tune, and other works for the instrument, came off as labored and tedious, which might have been attributable to the recalcitrant instrument in the old Army chapel at San Francisco’s Presidio, where the second evening’s show took place. According to Other Minds Director Charles Amirkhanian, promised repairs were never made, which left poor Sandra Soderlund struggling to play while audibly fiddling with the stops. When she rerecords the four (all these performances, by the way, will be available on Other Minds’ absolutely invaluable RadiOM Web site), we’ll hear whether better circumstances can rescue the dreary Ground & Fuguing Tune and the other Cowell organ works.

An American Classic, and It Rocks

Anyone hearing the finest work of the entire program, Set of Five (1952), could be forgiven for assuming it was written by one of those descendants, perhaps Cowell’s protégé-cum-colleague Harrison, so winningly does it combine piano (played by Julie Steinberg), violin (David Abel), and percussion (William Winant). Whether because of their virtuosity, their familiarity with the piece (the trio recorded it for New Albion in 1991), or the presence in the audience of its original violinist, the still-effervescent Anahid Ajemian, this performance rocked. An American classic, Set of Five seamlessly embraces elements from throughout Cowell’s career, from tone clusters to American hymnody to non-Western techniques, and, like Harrison’s best works, does so in a completely organic and universally appealing way.

As powerful and even revelatory as some of his music sounded over both nights, Cowell’s greatest contributions to music lay elsewhere. The books, journals, correspondence, programs, announcements, photos, and other material collected in Other Minds’ exhibition, which are available for viewing outside both concerts, showed how connected Cowell was to American music’s most creative composers (Cage, Harrison, Charles Ives, and many others in his Bay Area and New York City circle), to important performers (for example, the piano and violin sibling team of Maro and Anahid Ajemian, who premiered several important midcentury American works), and to music figures outside the U.S.

Cowell played a major role in bringing world music to the attention of American musicians and audiences; exposed composers to important new works by their contemporaries via the journals he created (New Music Edition and New Music Quarterly) and also through his courses in the Bay Area and New York’s New School and books such as New Musical Resources; and gave composers new and powerful ideas. Cage and Harrison, among others, built on his ideas to create their own pioneering work in percussion, prepared piano, aleatoric, and Asian-Western classical fusion. As even the smattering of documents here demonstrates, by connecting composers with performance and publishing opportunities, and also with their peers and other contemporary music they might not have otherwise discovered, Henry Cowell played a vital role in 20th-century American music.

The country owes Other Minds and its dedicated performers a significant debt for bringing Cowell’s contributions — and above all, his criminally underheard music — back to his home territory, and soon, via the magic of the Series of Tubes, to the world.