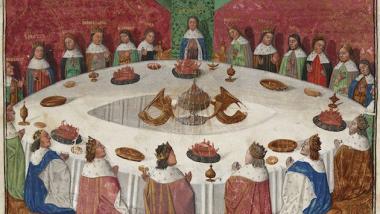 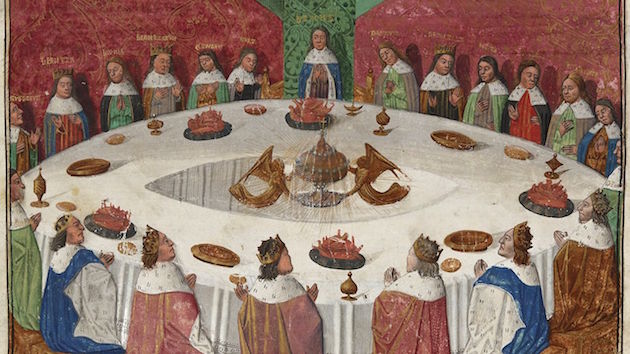 Henry Purcell wrote his most celebrated and enduring work, the chamber opera Dido and Aeneas, for Josias Priest’s London school for girls, where it was first performed in 1688. How fitting, then, that this ebullient and evergreen composer’s 1691 opera seria King Arthur should get a production showcasing the talented young musicians of the American Bach Soloists’ annual summer Academy. The piece, filled to overflowing with delicious arias, ensembles, suave and stirring choruses, colorful orchestral writing, and a dizzy story based on the John Dryden play, opened for a two-performance run on Thursday, August 10 at the San Francisco Conservatory of Music.

Above and beyond the music itself, which delivered abundant pleasures, the mechanics of the evening carried the feel of the future itself coming to life. One after another, the young, impeccably dressed and wonderfully self-possessed singers stepped forward from the chorus line behind the band to have their solo moments as priests and shepherds, spirits and nymphs, fishermen and sirens.

Conductor Jeffrey Thomas and the orchestra supplied the musical scaffolding to hold the many vocal glories (and some tarnished moments) together. Hugh Davies added the narrative cladding, in a rhyming précis (by Laurence Senelick and the poet Robert Pinsky) of Dryden’s tale about an Anglo v. Saxon standoff, the titular king’s pursuit of blind Emmeline and the magical interventions of several wizards. The Anglo-Saxon language itself, the very stuff and substance of Dryden’s text and Purcell’s settings, is the ultimate reward.

It’s a peculiarity of the opera form employed here, as Thomas contemplates in an apt program note, that the major figures in the story don’t participate in the singing. Instead we hear from various observers, celebrants, and philosophical interpreters of the story. Again and again they have timeless and wonderfully musical things to say that transcend the whirling narrative.

“Let not youth fly away without contenting,” goes one shepherd’s counsel. “Age will come time enough for your repenting.” Later on a trio of nymphs comes down firmly for Eros: “No joys are above the pleasures of love.” Cue the nymphs, naked to their waists, who turn up shortly to tempt the hero.

Purcell is a master of inscribing such sentiments in limpid melody and glowing harmonies. Those virtues came across most consistently and movingly in the choruses, which sounded creamy or crisp, as required. Beautifully blended, with the lines cleanly voiced, the choral passages arrived in sumptuous form.

Every member of the ensemble had a chance to show their vocal chops and sophistication. By this scorecard, soprano Amanda Keenan was the first to make a noteworthy contribution, with “The lot is cast, and Tanfan pleas’d.” The most dramatically compelling, she was one of a group of sopranos who stood out. Julie Bosworth’s bell-like, attentively phrased “Hither, this way, this way bend” opened into a delightful antiphonal chorus.

Among the men, the tall and grave-faced bass William Meinert stood out. First, as the Cold Genius in the Act III Frost Scene, he embodied polar temperatures with his huffy little trills and short, chilled phrases. Later on, as the god Aeolus, he mustered sonorous muscle and expansive range in his young, winning voice. Bass Bryan Jolly did strong double duty as the conniving Grimbald and a full-voiced lover. Tenor Gregorio Taniguchi sounded a little thin at the outset of “Come if you dare, our trumpets sound,” but found a handsome, virile vein later on.

Buttressed by leading members of the American Bach Soloists’ regular full-time orchestra, the band held their own and then some under Thomas’s direction. The Frost Scene proved to be the most perilous, with the pinched, frozen phrases falling into illegible scratchiness at times. But even as King Arthur stretched on to a rather voluble and dramatically inconsequential fifth act, the instrumental and vocal textures remained largely fresh and vibrant. A rustic peasant dance came across with lusty, club-footed accents. Interpolated passages for brass and woodwinds were full of high spirits. A final, opulently drawn Chaconne brought the long but never-tiresome evening to a close.

As they exited, following a standing ovation, the young singers and players could be heard buzzing excitedly to each other about what they’d just done. They had a lot to talk about.

The North American premiere of a 1734 Handel serenata is an interesting glimpse of the composer fulfilling his duties as unofficial court composer. Eyes and ears were on some of the strongly cast soloists.