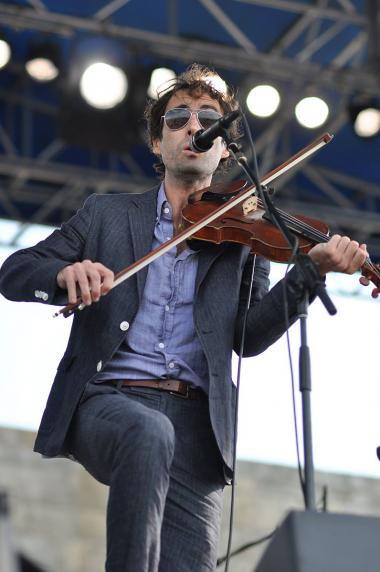 Andrew Bird is a composer, songwriter, musician, performer, and whistler. He’s also a hard fellow to pigeonhole. He’s not so much a crossover artist as a musical synthesist who’s comfortable with one foot in the folksy realm of A Prairie Home Companion, the other onstage at Carnegie Hall.

He’s a classically trained violinist who rejected the staid world of classical music and embraced the improvisatory nature of jazz — one who is equally capable of spinning off a cadenza by Sarasate or an Appalachian reel. He’s appeared as Whistling Caruso in The Muppets Movie, and provided the jaunty score for FX’s offbeat clown saga, Baskets. Sometimes his amplified and electronically processed violin sounds like a Stradivarius. Sometimes it sounds like a ukulele.

His musical knowledge is extensive and sophisticated. But with his lanky Ichabod Crane frame and homespun persona, he’s more akin to Jimmy Stewart. Taken in that context, his performance Thursday with Gustavo Dudamel and the Los Angeles Philharmonic could have been called, “Mr. Bird Goes to Disney Hall.”

For the L.A. Philharmonic occasion, he and his collaborator-of-choice, pianist and orchestrator Gabriel Kahane (son of Jeffrey Kahane), created a three-movement song cycle called Time is a Crooked Bow.

In a color-filled orchestration by Kahane that emphasized traditional textures with modernistic slurs and bright, twinkling tones, the piece unfolded like a grand landscape painting with sunbeams and shadows. Bird sang three songs “Weather Systems,” “Armchairs,” and “Scythians,” accompanying himself on violin and guitar and overlaying the lyrics with a dulcet bit of whistling. The audience, made up mainly of fans of his live performances and 13 albums, received the orchestration and Dudamel’s conducting with rounds of enthusiastic applause after each song.

Clearly Bird was more at home during the second half of the program, performing alone using a looping system that creates a succession of layered tracks He then brought Kahane on for a series of duets, including a fine piece of extended violin/piano improvisation. The mood, especially in the song “Figure Eight” by the late songwriter Bob Dorough, was decidedly playful. Given more time, it would have been nice to hear more from the duo.

As it celebrates its 100th anniversary season, the Los Angeles Philharmonic is honoring former music directors and composers who played a significant role in creating the orchestra’s legacy. Steven Stucky was so honored Thursday.

By way of Hutchinson, Kansas, where he was born in 1949, then Baylor University and Cornell, Steven Stucky found his way to the Los Angeles Philharmonic in 1988 when he was appointed composer-in-residence by then music director André Previn. His association with the orchestra lasted 21 years, ending with his death from brain cancer in February 2016. In addition to contributing new works, as the Philharmonic’s consulting composer for new music, Stucky played a primary role (with Esa-Pekka Salonen) in the creation of the Green Umbrella new-music series.

One of Stucky’s finest late creations, Symphony, was commissioned by the Philharmonic and premiered Sept. 28, 2012. It opened the concert Thursday in a splendid  performance conducted by Gustavo Dudamel.

A composer who had a deep historical respect for the symphony, Stucky confronted the form with a combination of reluctance and purpose, determined to create a work with, to use his word, “gravitas.”

Symphony unfolds as one uninterrupted development of four thematic motives and emotional states, from hopeful and ecstatic to panicked and chaotic. There are those that see in the work a sense of premonition, a reflection of how life can turn in an instant.

Stucky loved the power and color that a symphony orchestra can produce. And in its four mood-movements, Stucky painted Symphony with every color combination and instrumental voice he could fit on stage.

The first section, “Introduction and Hymn” begins with, in Stucky’s words, “lonely woodwind solos.” The mood, however, quickly sheds loneliness for an expansive, life-affirming sense of boundless opportunities. Fate takes over in the second section, “Outcry.” As Stucky explains, “Something has gone terribly wrong: music of hope and peace has been replaced by music of turmoil, even anguish.”

What had previously been colorful and systematic turns chaotic, as tempi become faster and erratic and a two-note phrase is hurled from section to section, instrument to instrument. As the sound approaches critical mass, the music enters the Scherzo movement Stucky titled “Flight.”

When the music reaches the outer limits of ensemble and sectional interplay, the original sense of hope returns as the hymn theme is repeated, which leads to the final resolution.

The vibrant new composition works brilliantly in tandem with a transitional work from Esa-Pekka Salonen.

The beginning of a long celebration emphasized everything that’s special about the orchestra and the city.