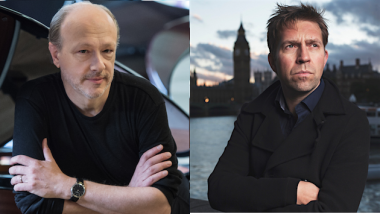 When it was announced that Norwegian pianist Leif Ove Andsnes and Canadian pianist Marc-André Hamelin would together present a program of repertoire for two pianos / four hands, you could forgive some slight skepticism. Piano duo, or two pianos / four hands repertoire occupies a small yet significant corner of the classical piano literature. Once a popular medium for small opera productions and salons in the 19th century, many composers published two-piano versions of their orchestral works as well.

Dedicated duo teams, with a level of focus and rehearsal time together unavailable to soloists, can offer more cohesive performances than more illustrious pianists whose focus is not the duo repertoire. While Andsnes and Hamelin have collaborated in the past, most recently at the Ojai North Festival in Berkeley in 2012, this tour, a grueling five-week schedule beginning in the Netherlands in March, and ending in Washington, D.C. in May, was their first as a duo.

The San Francisco Performances recital at the Herbst Theatre last Tuesday, opened with Mozart’s Larghetto and Allegro, K.deest, a reconstruction by Paul Badura-Skoda from sketches that were left after Mozart’s death. The piece has qualities of an operatic overture, but Andsnes and Hamelin conversed eloquently, with distinct voices and differing perspectives on the themes and motifs. One might pose a question, then the other would either answer seriously, or perhaps laugh off.

The music went on like an intellectual debate, hardly surprising given the polymathic talent that both Andsnes and Hamelin possess. The acoustic of the theater, though much improved in the recent renovation, somewhat penalized the second piano without the lid which Hamelin played, but their carefully choreographed performance represented two great minds, but with one, unified objective.

The concert moved on to Stravinsky’s decisively neoclassicist Concerto for Two Pianos, written for the composer and his son, Soulima. The first movement, full of repeated notes and chords, created a whirlwind of mechanical textures in vivid, distinct colors. While infused with the dark modernism of the mechanical era, the accented repeated notes were more pointillistic than percussive, bringing rhythmic humor and lightness.

Of course, such lightness contrasted heavily with The Rite of Spring, presented in the second half of the program. Andsnes and Hamelin launched the volcanic and brutal work with utmost control, almost ironically. There was a sense of coolness, rendering the performance a tad removed from the score’s unpredictable, savage nature. The screams that can be imagined in the sacrificial dance were somewhat muted. Nonetheless, the entire rendition was full of rich colors in bold strokes. Also, playing the optional notes in Stravinsky’s own reduction created the sonic density of a much larger ensemble, as if it were performed on three or more pianos.

With precision and care, Debussy’s En Blanc et Noir was elevated to an unusual level of clarity and subtlety. In the opening, you could imagine giant ocean wave after wave but also the spray of water droplets, captured in fine detail by the pianists. The musical texture possessed boldness more like the precisely carved woodblock prints of Hokusai than the paintings of Renoir, and lyrical lines were drawn with clear outlines. Hamelin may have been more modest than Andsnes in being poetic, but the two continued to challenge each other, while balancing the dynamics and colors. The radiant, unison fanfare toward the end of the second movement was a triumph, with the two instruments creating a wide soundscape that practically defied physics.

Andsnes and Hamelin concluded the concert with two encores: cheerful renditions of Madrid and Circus Polka, both by Stravinsky.