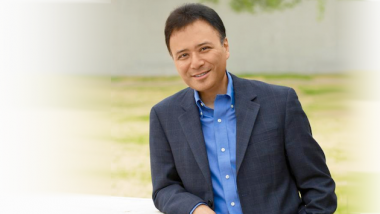 For piano music lovers in the South Bay, there has not been a better ticket than the Steinway Society series. The Society has consistently presented world-class masters as well as promising young talents. With the sudden sale and closure of its home, The Trianon Theatre in San Jose, the society had to scramble to secure alternate venues, and will present its 2019-20 concerts throughout the greater San Jose area.

The Society’s 25th season opened with a sold-out recital by local favorite Jon Nakamatsu, at the McAfee Center in Saratoga, organized around the musical impromptu. Nakamatsu began with an inquisitive reading of two by Chopin: Op.29 in A-flat Major and Op.51 in G-flat Major. Within the opening measure of Op. 29, he made it clear that his was not going to be an orthodox, passive account. He approached the first measure cautiously as if the notes had just come to his mind with some trepidation, then the second measure that repeats the first measure exploded with confidence and infectious joy. Though carefully constructed, the spirit of free-flowing, improvised composition permeated the performance with a sense of curiosity and exploration. In the later Op. 51, contrasted with the youthful A-flat major work, he projected a sense of immense contentment.

The pianist then took a microphone and discussed impromptus, a genre that was popular in the first half of the 19th century, thanks to the growing number of amateur pianists at the time. Nakamatsu seemed equally at ease giving a lecture as at the piano, which is no surprise given that he was a high school teacher before winning the Van Cliburn competition in 1997.

Nakamatsu continued to hold the audience’s attention through Schubert’s Four Impromptus, Op. 90. The striking G unison at the opening of the first, in C minor, announced the seriousness of the matter, followed by a hushed melody and then a chorale at a distance. From there, the music bloomed in verdant A-flat major and an entirely different atmosphere in No. 2. He navigated decisively through modulations, presenting the different characters and moods vividly.

Nakamatsu had explained that Schubert’s publisher printed the third impromptu in G major, instead of the original G-flat major, which has six flats, fearing that no one would buy a score with such a key signature. However, Nakamatsu insisted that changing the key, even by only a semitone, has a profound effect and argued for his case in a performance that gave distinct characters and colors to Schubert’s surprising modulations to distant keys. Nakamatsu treated every modulation as a transport to a different scene, moving gently at times and abruptly at others, for dramatic effects.

Beyond the emotional journey, the interpretation was well-structured, not unlike a well-prepared lecture. And it was charming: Nakamatsu peppered the quick notes in No. 2 and No. 4 with deft staccato, giving lightness and air. The lyrical No. 3 was deeply emotional and sighed heavily at times, depicting the inner conflict and struggle to contain a deep passion within.

The second half of the recital consisted of the valiant Brahms Sonata No.1, Op.1. Nakamatsu, in his introduction, emphasized Brahms’s ambition in his Opus 1. He illustrated the orchestral instruments that Brahms must have envisioned, from tuned percussion to woodwinds and strings. The soundscape was beyond what a nine-foot long wooden box was intended to produce, more symphonic than pianistic, exploding with colors and textures. The ethereal second movement, a theme and variations, contrasted with the scherzo and the triumphant fourth movement, where trumpet-like octaves were dispatched with ease, bringing raucous cheers at the end.

There is a Japanese proverb, “tōdai moto kurashi,” meaning, “it’s dark at the foot of a lighthouse” — i.e., we may search for beauty far and wide, yet neglect what’s around us. Nakamatsu remains one of the brightest stars in the sky, yet he is deeply rooted here. He clearly remains a favorite, and should be heard more, for his intellectual approach and deliberate accounts. For all his modesty, Nakamatsu gave some of the most emotional and cerebral playing imaginable. He plays Romantic-period repertoire with commanding authority.

The audience was delighted with a humorous and loving account of Scott Joplin’s “The Entertainer,” performed in an impromptu style as an encore.

Seven finalists competed for one of classical music’s most famous prizes.