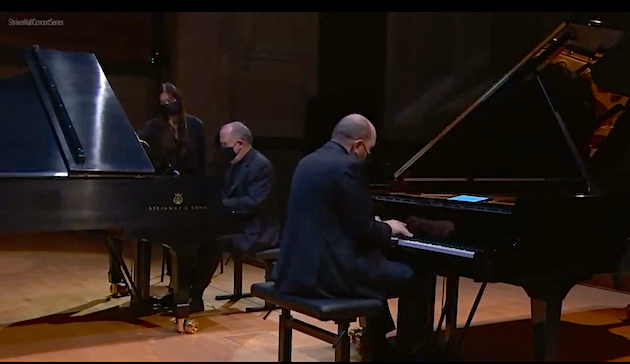 Even as streaming and virtual concerts have replaced live concerts, artists continue to produce, in ways perhaps unimaginable before. For the 2020–2021 season, Garrick Ohlsson and Kirill Gerstein were to team up and perform as a duo on tour, from the Bing Concert Hall at Stanford to Lincoln Center in New York City. Rather than abandoning the tour entirely, a curious juxtaposition of technology and geography has taken place to produce a streamed virtual concert.

The rarely heard Ferruccio Busoni Fantasia contrappuntistica opened with a vibrant proclamation. Both Ohlsson and Gerstein are known for their recordings of Busoni concertos, and their confidence in interpreting the somewhat unwieldy work was evident. The nervous and unsettling Allegro in Preludio unambiguously set the stage for the 20-plus minutes of what was to come. The polytonality blended bold colors in the Corale, while distant hymns added an unsettling atmosphere. The fugues that followed were imbued with clear voices and stern determination.

The clarity of the sound, even via less-than-audiophile-quality streaming, appeared be due, at least partially, to the placement of the pianos: they were arranged longitudinally on the stage of the Carol H. Hume Concert Hall at the San Francisco Conservatory of Music, with the instruments projecting away from each other toward the sides of the stage. The two sets of microphones in front of each piano provided separation of the instruments, without sacrificing the unity. In most live performances, two pianos are dovetailed with each other, with the lid removed from the second piano. While this allows the pianists to look at each other, there is often a lack of balance between the instruments.

The acoustic quality was also apparent in the Rachmaninoff Symphonic Dances, which were written concurrently with the more commonly heard orchestral version, presumably with ballet rehearsals in mind. The projection of orchestral colors and intricate crisscrossing evoked kinesthesis. The melancholic melody in the middle section of the first movement evoked heart-wrenching emotions, and the dark waltz, with its omnipresent diminished chords, maintained an eerie atmosphere throughout. Here, the minds and the hands of the two pianists were in perfect synchrony, projecting a unified narrative. Rhythmic tension in the third movement, with rapidly changing tonality and fickle repeated notes suggested dancers flying precariously in the air while remaining in utmost control.

Ravel’s notoriously difficult La Valse, also written for two pianos concurrently with other versions, concluded the program. Originally a commission from Sergei Diaghilev which was then rejected, the piano-duo version is a performance-worthy score, unlike the piano solo version, which is a somewhat lamentable reduction in comparison to the orchestral and piano duo versions. Here, Ohlsson and Gerstein approached the work with focus and discipline, quite a contrast with the often vague and rhapsodic approach of lesser duos or the self-indulgent interpretation of some soloists. 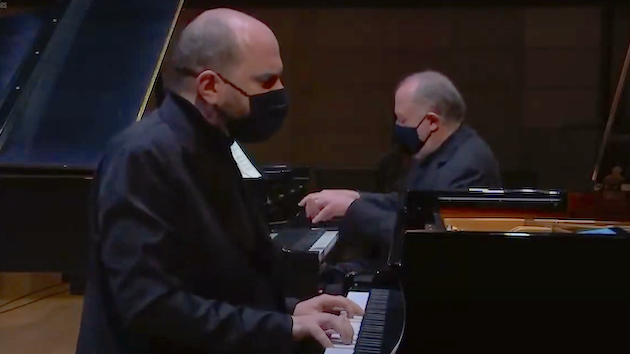 Ravel explicitly stated the setting: “The scene is gradually illuminated. The light of the chandeliers bursts forth at the fortissimo, letter B [in the score]. Set in an imperial court (in Vienna), about 1855.” The programmatic nature of the piece was illustrated by the two pianists from one scene to another with clear intentions, almost as if to accompany a film. The whirlwind of emotional states that seem to change with every page was executed with assurance. This approach may have diminished some of the exuberant drama and surprises, but the crisp execution would have given a solid assurance to dancers on stage. Again, cool confidence reigned.

Despite the fact the concert was prerecorded, the performance was unlike it would have been in a typical recording and the extensive edits and engineering that would accompany it. In the live Q&A after the prerecorded performance, Ohlsson shared that they were allotted only three hours to record the entire 70-minute program. They barely had time to set up the instruments, cameras, and microphones, warm up, and record the entire program in that time. The minor blemishes that would normally be edited away remained on the recording, but they took nothing away from the confidence the artists exuded, and gave a sense of authenticity to the performance you only encounter in live performances.

Ohlsson also shared that they spent several days working together after Gerstein arrived from his home in Berlin, as they had never played together. All sorts of restrictions and circumstances prevented them from working as they normally would — at the conservatory or on pianos at the Steinway store.

An interesting aspect of the streaming was that, even though the recording was made in San Francisco, the streaming was hosted by the Shriver Concert Hall Series in Baltimore, Maryland. Having had the pleasure of listening to the concert, I was grateful that the event happened at all.

Garrick Ohlsson Communes With the Spirit of Brahms

Juxtaposing the composer’s early and late styles made for effective contrasts as well as interesting interpretive choices.

A young Russian-born pianist wins awards, emigrates to the West, concertizes widely, and teaches music at a prestigious school — all in a day’s work.

Garrick Ohlsson’s greatness is revealed yet again in his incomparable playing of Liszt, Debussy, Brahms, and Chopin.