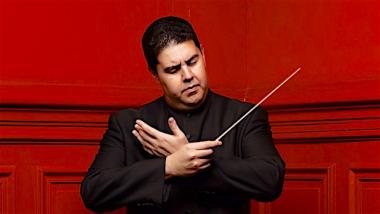 Symphony Silicon Valley gave a concert of what preconcert lecturer Janet Sims called “peaceful grandeur” on Saturday. The venue was the California Theatre in San José, and the conductor was first-time guest Tito Muñoz, music director of the Phoenix Symphony.

The mood was set with the brief opening work, Canto by the contemporary American Adam Schoenberg (no relation to Arnold). Over hushed and fuzzy strings, a trumpet (James F. Dooley) makes a lonely call, reminiscent of Copland’s Quiet City or Ives’s The Unanswered Question. Other winds echo the trumpet or blend with it. The accompaniment begins to sound a little like the foghorn minimalism of Ingram Marshall. Gradually the sound broadens, and an oboe (Pamela Hakl) introduces a motive of wide-open harmony even more reminiscent of Copland than before. The mood lightens further and then it’s over.

Based on this piece, Schoenberg — who teaches at Occidental College in L.A. — is an ambassador from another world where evoking the music of Copland’s populist period is no longer the outrageous atavism it would have been denounced as 40 or 50 years ago.

Violinist Anne Akiko Meyers then joined Muñoz on stage. Coincidentally, they are the team that recently premiered a new concerto by none other than Adam Schoenberg. At this concert, they played instead Samuel Barber’s Violin Concerto, a work which has had 80 years to prove itself one of the great American compositions of its kind.

Barber’s first two movements are mostly also quiet contemplation, and his finale is a moto perpetuo. Throughout the work, the focus was on Meyers for the strongly lyrical line she created in all three movements, even the busy finale, and the remarkable sound she drew out of her famous Guarneri violin. The instrument has a full and well-lubricated tone, bright and piercing at the top, broader lower down, and often rough and fiercely resonant with overtones in Barber’s many cadenza-like passages.

If listeners could tear their ears away from this sonic spectacle long enough to notice the orchestra, Muñoz — a violinist himself — proved himself a master at coaxing a surging emotion out of the string sections, playing with such precision and singleness of purpose that they seemed another soloist accompanying Meyers. The winds, notably in Hakl’s long oboe solo introducing the Andante, formed a cleanly separated group by themselves.

Tchaikovsky’s Symphony No. 5 in the second half gave further opportunity to admire Muñoz’s distinct conducting style. Tchaikovsky is often considered a garrulous composer. What he needs is a conductor who intuitively understands what every passage and phrase is there for. Muñoz has that understanding. His Tchaikovsky speaks directly and incisively.

Muñoz’s plan for this symphony was to begin slowly — but energetically — and end quickly. The first two movements were almost glacial in their unhurried but intense contemplation of events. There was plenty of time to admire rich sonority in such often-neglected moments as the slow-moving harmonies in the lower strings that introduce the second movement. Muñoz held a fermata in the first movement’s opening “fate” theme for several seconds, an impossibly long period of time that few other conductors would attempt to get away with.

With the third movement’s light waltz, Muñoz relaxed and sped up. The symphony’s most notorious fermata, the one after a dominant chord near the end of the finale, which usually makes audiences think the music is finished and start to applaud, is actually marked by Tchaikovsky with a longer rest than that one in the first movement. But Muñoz dashed through it, going on, just as the first clap hit, to the grand final E-major statement of the “fate” theme. The score labels this largamente, but, like most conductors disinclined to milk Tchaikovsky for pathos, Muñoz took it briskly.

Distinguished wind solos — Michael Corner’s haunting clarinet introducing the “fate” theme, Meredith Brown’s elegant horn in the second movement’s main theme — were allowed to run with some free individuality, but the heart of this performance in the winds, as in the strings, lay in the unity when the group played together. One repeated wind tag in the first movement formed a precisely delineated “music box” sound unlike any of the individual instruments (clarinets supported by oboes, bassoons, and horns) making it up. Tchaikovsky used this effect in some of his earlier works, and its emphasis in this performance was a welcome reminiscence.

In her 33-year career as a professional violinist, Anne Akiko Meyers, 40, has amassed a unique resumé that includes a debut with the New York Philharmonic at age 12 and recent tours with Il Divo and Chris Botti. Shortly before she launches her new CD with an Oct. 4 concert, she discusses her childhood debut on The Tonight Show, bowing problems associated with pregnancy, and her love of the old and embrace of the new.

Jeanrenaud and Munoz Take Pop-Pop to the Top of Davies

After-hours at the Symphony, Joan Jeanrenaud and PC Munoz promise to stir up the joint with mashups for cello and percussion/beats.