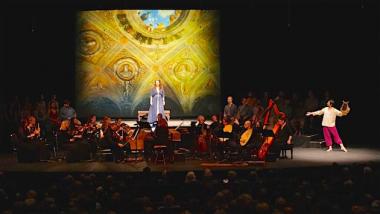 The story of Orpheus and Eurydice is pervasive in the west, a tale so familiar and powerful that it has inspired writers, artists, and musicians since ancient times: Orpheus, son of Apollo and the greatest musician of antiquity, succeeds in persuading Pluto, god of the underworld, to release his dead wife Eurydice back to the land of the living, provided that Orpheus does not look back at her. Fearing she has not followed him on the path from Hades, he looks back and loses her forever. It’s irresistibly attractive to composers, who have produced dozens of operas about the pair since the genre was invented around 1600.

On April 20, Apollo’s Fire, The Cleveland Baroque Orchestra, came to Cal Performances for an inventively staged and musically satisfying performance of Monteverdi’s 1607 version of the story, L’Orfeo, a masterpiece that’s one of the monuments of early opera.

With an exceptionally beautiful and well-paced libretto by Alessandro Striggio, L’Orfeo has grandeur and intimacy, joy and tragedy. This production, conducted by Apollo’s Fire artistic director Jeannette Sorrell, directed by Sophie Daneman, and with projections designed by assistant director Camilla Tassi, reflected these aspects of the opera and made considerable dramatic impact with minimal materials.

The orchestra was arrayed on the stage around a small platform built atop Zellerbach Hall’s enormous stage, with the chorus, when it was not in motion, positioned on risers to the sides of the platform. The chorus made its initial entrance as a procession down the stairs on one side of Zellerbach, and the side aisles of the hall were used freely for various entrances and exits.

There were few props, and the sets consisted primarily of sumptuous and judiciously chosen paintings by Corot, Poynter, Benlliure y Gil, Poussin, Styka, and Barker. Some of the paintings illustrated the story, some provided atmosphere. Several projections were photographs taken by Tassi inside the Palazzo di Mantova (Mantua), where L’Orfeo was first performed for the ducal court. The paintings were sometimes modified for dramatic effect, such as the removal of Euridice from Corot’s “Orpheus leading Euridice from Hades” at the moment in the opera when Orpheus fatally glances backward at his beloved and loses her forever.

No designer is credited in the program for the simple and effective costumes: flowing gowns for Euridice, the nymphs, and Bacchantes, rustic culotte-length pants with loose shirts for Orfeo and the shepherds, long black for the chorus during the Hades scenes.

Karim Sulayman, a husky-voiced tenor, was a moving and physically expressive Orfeo, very much in love with the poised Euridice of Erica Schuller, of whom we see much less than Orfeo. Soprano Amanda Powell made a tremendous impression in the short role of Proserpina (Persephone), who is so moved by Orfeo’s story that she persuades her husband Plutone (Pluto) to let Euridice go. Mezzo-soprano Amanda Crider was a lovely Hope, and her scene with Sulayman, at the end of which he must enter Hades alone, one of the most moving in the opera.

Bass baritone Jonathan Woody was a fine Caronte (Charon) and baritone Mischa Bouvier a sturdy Plutone. Tenors Owen McIntosh and Jacob Perry stood out in several tiny roles for their character and beautiful voices. The chorus sang beautifully throughout the opera. One wishes only that L’Orfeo had been presented in a smaller venue, where the singers would have had more impact and would not have had to fill such a large hall.  Sophie Daneman’s direction of the singers and chorus created both strong stage pictures and delicate interactions among the characters.

This production uses an unusual version of the opera. The music for the original ending, in which Orfeo is torn to pieces by a mob of drunken Bacchante women, is long lost, and L’Orfeo is typically performed with an ending in which Apollo carries his son Orfeo off to the heavens. René Schiffer, a cellist in the orchestra, has set the verses for the original ending to music in Monteverdi’s style. This ending makes for a wild revel at the close, and Schiffer’s musical choices are largely good ones, but it also seemed to me to be overlong and somewhat out of proportion to the rest of the last act.

Apollo’s Fire is as good a period orchestra as any I’ve heard, with well-tuned strings and brilliant winds and brass. Special praise goes to concertmaster Olivier Brault and violinist Adriane Post, for their duet toward the end of the opera, and to the entire continuo band, which plays throughout the opera owing to the declamatory nature of so much of Monteverdi’s vocal music: John Lenti and William Simms on theorbo and guitar; Maxine Eilander, magnificent on Baroque triple harp; Thomas Forrest Kelly on organ and regale; conductor Jeannette Sorrell on harpsichord and organ.

Jeannette Sorrell: Undeniable and on Fire

The conductor brings Apollo's Fire to Cal Performances and talks about her career and the ensemble she founded.

One of America’s best early-music ensembles combines forces with a sterling but hard-to-watch countertenor.