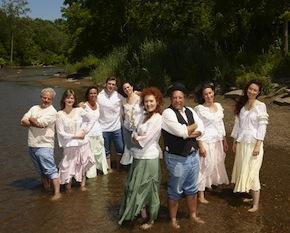 Metropolitan Cleveland is about the size of metro Sacramento, yet in addition to the famous Cleveland Orchestra, it’s also home to Apollo’s Fire, a professional Baroque orchestra I was fortunate enough to hear Sunday at UC Berkeley’s Hertz Hall. Sharing the bill was a French countertenor, Philippe Jaroussky, 33, with a successful European career and a wide following through many recordings of Baroque Italian arias, which he performed Sunday. Jaroussky does some things astoundingly well, and his strengths are suited to audio recording. He is also a bit of a one-trick pony and has some distracting bad habits.

First, the good parts: Jaroussky showed in his 10 Handel and Vivaldi arias an easy agility, a perfect coloratura, and a clear and attractive tone. His blazing “Agitato da fiere tempeste” from Handel’s Oreste set the virtuoso pace of the concert, but he was also happy to languish in beautiful singing in “Ho perso il caro ben” from Handel’s rarely performed Il Parnasso in festa, as well as in a poignant Vivaldi rarity on a chaconne harmony, “Vedrò con mio diletto.” If you closed your eyes, the performances of these difficult pieces sounded effortless and stylish.

Regrettably, Jaroussky’s atrocious posture and unfocused fidgeting was distracting, making him difficult to watch. I attribute this mostly to bad habits. Deportment is a crucial component of this music. In Handel’s time, operatic acting had evolved into a highly stylized code of gestures wherein a singer struck expressive poses for long periods. These postures evolved from the strict language of courtly dance, with the goal of looking graceful while conveying information about the character and his emotional state to a non-Italian audience. By looking at Jaroussky’s unfocused movement, a listener would be unable to tell one aria from another. He at least could have worn an unwrinkled coat that fit.

If you closed your eyes, [Jaroussky’s] performances of these difficult pieces sounded effortless and stylish.

With a skeleton crew of 15 strings, Apollo’s Fire still tended to overpower the countertenor in the 650-seat hall, even with the oboe parts omitted. This is unsurprising, because falsetto singing often lacks carrying power. Falsetto is the same as string harmonics or overblowing on wind instruments: a fundamental tone is muted, allowing only the overtones to resonate. The resulting sound is less rich but has more purity than full singing because falsetto lacks a fundamental pitch. Male singers with strong falsettos are natural basses or baritones, not tenors, because their larger vocal folds have more tissue on the edges of the folds (where more overtones are produced).

A well-developed falsetto is a delightful special effect that works well in ensembles and amid an operatic cast. Still, an entire concert of a countertenor singing opera arias is a bit like a tuba or piccolo recital: The singer needs to make up for his natural lack of vocal heft through a strong stage presence and by showing musical range. I would have preferred to hear Jaroussky sing something other than just bravura arias, which made me wonder whether he was capable of anything else.

And Now for Some Instrumental Fire

Fortunately, Apollo’s Fire under Music Director Jeanette Sorrell had wisely programmed a number of instrumental selections. This is a very enthusiastic, tight band of mostly 20-something string players, virtually all women, that testifies to the bumper crop of period instrument players rising out of the various early-music institutes of large Midwestern conservatories. It ranks with America’s best period-instrument groups.

The orchestra has a flair for showmanship.

The band opened with a risky performance of a Vivaldi concerto grosso, in which it occasionally allowed itself some mistakes. Once settled in, Montreal-based concertmaster Olivier Brault offered a brilliant rendition of Vivaldi’s Tempesta di mare violin concerto. He plays more self-consciously chin-off than most Bay Area period violinists, and the orchestra followed his lead. The orchestra has a flair for showmanship and relished a full-throttle tutti in a sequence in the final movement. A group rendition of Vivaldi’s La follia trio sonata in the second half was played standing up, from memory, which reminded me of those virtuoso violin programs where teenagers give group performances of Kreutzer works in unison. Brault often plays in Ensemble Caprice, which I heard perform Vivaldi’s Follia only last week. This performance could not have been more different.

About 15 years ago, someone in the French cultural ministry decided that every moderate-size French city needed a Baroque orchestra. Since then, many young but experienced performers such as Jaroussky have emerged from France, with its wealth of opportunity. Young American countertenors are not so fortunate. For every Cleveland or Berkeley, there is a larger Phoenix, San Jose, Miami, Fresno, Sacramento, San Antonio, or other city that lacks a stable, professional, early-music ensemble. American opera houses avoid Baroque works, and do so in oversize halls. Sunday’s concert hinted at what is possible.