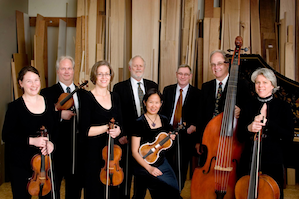 Like Baroque music, the rosters of Bay Area early-music ensembles sometimes resemble Mexican cuisine: the same ingredients, just combined different ways. There were many familiar faces onstage Sunday. In self-selected groups, the result can be remarkable ensemble and consistency of phrasing, as was the case with Archetti, who applied some beautifully terraced dynamics to a fugal theme in Pieter Hellendaal’s (1685–1762) concerto grosso in D Major, Op. 3, No. 5. This subset of players generally tended to moderate its editorial intervention in the music’s phrasing and articulation, allowing the works’ musicality to stand on its own.

The concerto grosso was a form promoted heavily through the culture of print. The 18th century was the golden era of papermaking, printing, engraving, and binding; well-preserved print objects from this era are wonders to behold. In the music from this time, printing moved away from Italian, and especially Venetian, centers to engraved music printed in London.

The earlier Corelli work often sounded like a medley of Baroque gestures so deftly put together that it would be hard to suspect the composer’s limited range.

Sunday’s program drew from publications dating from mid-18th-century London. All the works on the concert lacked divided violas of the early part of the century, giving the program a lighter, less churchlike, lilt. Because of the publishing shift, composers were asked to write for flexible instrumentation. Such works can be performed by a chamber orchestra, with winds, or with a small string ensemble like Archetti.

Two classics stood out: Corelli’s Concerto Grosso in F Major, Op. 6, No. 2, and Handel’s Concerto Grosso in B-flat Major, Op. 6, No. 7. The earlier Corelli work often sounded like a medley of Baroque gestures so deftly put together that it would be hard to suspect the composer’s limited range. Archetti avoided interjecting that typical dancelike lilt to the dactylic meters of the finale. The Handel concerto seemed easier and more integrated than the Corelli; even its textbook fugue, employing the simplest subject in all of music history, a singe pitch in accelerating rhythm, continued to hold interest without waning.

Sometimes the players’ ensemble ethos did them a disservice. In the Corelli concerto, Carla Moore tried too hard to be modest where opportunities for more-extended virtuosic cadenzas beckoned. She certainly proved her mettle through fast passagework and opportunities to show off in the Hellendaal work, as well as in Charles Avison’s (1709–1770) arrangements of Dominico Scarlatti keyboard works for string ensemble. Avison’s arrangements, strung together as a concerto grosso, were audibly unviolinistic, whereas much music of the concert’s music was exceptionally idiomatic.

The one nonstring work on the program, a minor Handel organ concerto in F major, played by Davitt Moroney, also underwhelmed in virtuosity. Born of convenience, the “boutique” portable organ of most early-music ensembles is completely ahistoric. Although functional as a continuo instrument, it has limited solo potential for showing off registration and volume. Moroney finessed Handel’s jesting “cuckoo” articulations with just enough chiff, and his rhythm was spot-on perfect. Still, in this configuration, Handel’s organ concertos, most of which were written as interludes between acts in his larger oratorios, take on a diminutive, toylike quality, which I doubt was among the composer’s intentions.

The concert’s theme was Italian music published and promoted in London. Interestingly, the flourishing of Italian Baroque music happened long after the peninsula’s political and economic apex. The aging heavy economy continued to support an unsustainable artistic establishment on a foundation of old wealth and heavy bureaucratic structures, but their increasing irrelevance in the new world order led to a net export of music and musicians to the new and more nimble superpowers of the time. Perhaps this is a lesson for contemporary America.