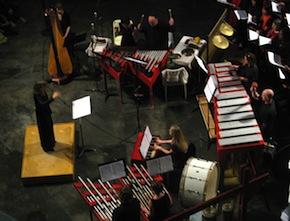 The Astonishing World of Lou Harrison

In 1971, Lou Harrison learned that a convention of Esperanto speakers was coming to San Francisco, and as a speaker of the intended universal language, the Aptos-based composer decided to write a work in that invented tongue.

But what words would express Esperanto’s ideals of international amity, which the lifelong pacifist Harrison might have thought especially pertinent during the Vietnam War? Many composers turn to religious texts to express such sentiments, and Harrison earlier had composed settings of Christian masses. But he had been intrigued by Buddhism since his teenage years in 1930s San Francisco, and his interest intensified after fellowships that sent him to study music in East Asia in the early 1960s; he wrote a series of short instrumental works inspired by Buddhist themes over the next few years. Now Harrison decided to set to music his favorite expression of Buddhist thought: the popular Heart Sutra, written down centuries earlier.

An exuberant performance Friday at the Berkeley Art Museum/Pacific Film Archive reaffirmed Harrison’s La Koro Sutro as one of the 20th century’s most powerful works of sacred music. So why have you probably never heard it performed live?

The problem is the instrumentation. To attain its full musical value, La Koro Sutro must be played on the so-called “American Gamelan” — custom-made instruments inspired by the ancient Indonesian percussion orchestra. The composer and his life partner, Bill Colvig, constructed it from “junk” like oxygen tanks, metal trash cans, and plumber pipes in the early 1970s and tuned the instruments to an intonation much more beautiful than the compromised “equal temperament” that has dominated Western music for the past century or so. (Harrison, who died in 2003, did arrange the work for conventional classical instruments later, but they lack the original’s zingy percussive quality, and the music doesn’t work on Indonesian gamelans.)

Friday’s transcendent performance brought out the richness of the instrumentation and tunings.

With his friend and early musical partner John Cage, Harrison had been making instruments out of junk since the 1930s, and working with natural tunings since the early 1950s. Harrison’s friend and frequent collaborator William Winant, a noted Bay Area percussionist, inherited some of the instruments (now stored at UC Santa Cruz and Mills College), which Colvig later nicknamed “Old Granddad” after they built several others, and made them available for this performance.

If there’s another 20th-century composer who wrote lovelier violin melodies, I can’t think who it might be.

Friday’s transcendent performance at the museum’s (potentially problematic) resonant hall brought out the richness of the instrumentation and tunings. The precise articulation of the UC Chamber Chorus, as well as of the chamber chorus Sacred and Profane and the USF Classical Choral Ensemble, all sharply conducted by Marika Kuzma, prevented the words from turning to mush. (Only briefly in the big concluding movement did the sound blur a bit.) The tuned percussion instruments, played by the William Winant Percussion Group and augmented by harpist Naomi Hoffmeyer and organist Sigrid Sheie, sang sweetly in the smooth concrete-walled hall, packed with listeners sitting on cushions and lining the balconies. My only reservation was Kuzma’s choice to keep her arms aloft long after the exhilarating concluding chords had echoed away. The device — certainly appropriate in many cases (to let silence linger) — has become so overused that it threatens to become cliched or self-aggrandizing. Here, it frustratingly forestalled the applause that the exultant finish invited immediately.

Winant opened the concert with a gentle performance of Harrison’s little percussion work Solo for Anthony Cirone (named after the San Jose State percussion professor who played Harrison’s music when the composer taught there in the 1960s and ’70s). The great new-music pianist Sarah Cahill, who curates the museum’s weekly [email protected] Friday series once a month, gave a crisp, dramatic performance of Dance for Lisa Karon, a recently unearthed 1938 score. One of many solo piano pieces Harrison composed while working as a dance accompanist at Mills College and for several Bay Area dance groups, it’s minor Harrison but does demonstrate his lifelong facility for dance rhythms, as well as more advanced techniques (polytonality, polyrhythms, biting dissonances) that the composer was exploring as he studied the works of Charles Ives — which few other composers of the time even knew existed. It’s nice to add another thread to Harrison’s already rich and extensive tapestry of musical accomplishment.

Julie Steinberg’s gentle piano chords and Winant’s tuned percussion provided a soft cushion for David Abel’s poignant opening violin tune in the next piece, the utterly enchanting Varied Trio, which Harrison wrote for the pair and Winant in 1986. Like La Koro Sutro, it’s a major work, composed during one of the composer’s richest periods, which also saw the creation of his two mighty piano concertos. And it’s also a marvel of eclecticism. The luminous first movement, “Gending,” named after a Javanese music structure, derives from the gamelan music that so beguiled Harrison during this period and ever after. If there’s another 20th-century composer who wrote lovelier violin melodies, I can’t think who it might be; Varied Trio’s first five fiddle notes will melt your heart.

Rice Bowls a Change of Pace 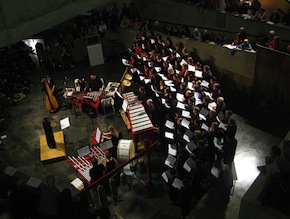 But rather than basking in the opening movement's sonic beauty, Harrison’s next movement, “Bowl Bells,” changed the mood completely, with an extended solo for porcelain rice bowls, ably played by Winant on chopsticks and punctuated by pizzicato violin and piano chords. The third movement, “Elegy,” looked back to his early chromatic dissonant works, while the fourth, “Rondeau in Honor of Fragonard,” unleashed yet another unforgettably plaintive violin tune that channels the Baroque music that Harrison adored from his teenage years. The trio closed with Steinberg leading a driving, almost bluesy piano-pumping dance.

As with a Bach orchestral suite built from various dances, the challenge in interpreting such a, well, varied creation lies in making it sound like a single cohesive work. This the trio did admirably, paying careful attention to Harrison’s stylistic preferences about such issues as vibrato (restrained) and rhythm (pronounced).

Occasionally, Abel’s violin was a little hard to hear from where I sat, but the performance definitely did justice to this lovely 20th-century masterpiece. Who knows how many more times we’ll be able to hear it played by the fine musicians the composer wrote it for? It’s hard to imagine anyone else being so sensitive to his aesthetic. And 95 years after his birth, even those who knew well the great Bay Area composer’s music marveled at how this joyful concert reaffirmed its timelessness. Or, in the closing words of the Heart Sutra: “Going, going, yonder going on beyond awake, all hail!”