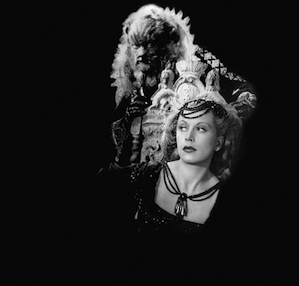 The work debuted in 1994, and it has been available on recording ever since: As Allan Kozinn wrote in a 2001 biopic, “Glass and his music are always everywhere.” Glass’ more-recent work has revised my perception of this score. Its revival was a missed opportunity for retouching — a treatment routinely given to Broadway shows in revival and sadly lacking in classical music.

The score is pure Glass boilerplate, if that is to your taste. My issue with Glass is he lacks art direction, which Cocteau has in abundance. Whether his music deals with the French Renaissance, Buddha, the Civil War, or modern New York, it sounds essentially the same. For San Francisco patrons familiar with Glass’ 2007 opera, which was commissioned by the San Francisco Opera, entire passages were harmonically and melodically identical. When it came out, La Belle et la bête was a notable new development in Glass’ artistry, but in retrospect this was more driven by a genre and orchestration change than by a breakthrough in musical substance. As Kozinn put it, “Once the press of commissions and deadlines sent his production line into overdrive, he slipped into Rossini mode … 5 or 10 scores might churn through essentially the same musical ideas before Mr. Glass hit on something fresh, and when he did, he would explore that in another 5 or 10 works.”

La Belle et la bête is one of the fresher ones. The musical interest of this score comes from the vocal declamation, forced by the film to follow the timing of dialogue when singing generally takes more time than speaking. The French language is remarkably suited to rapid syllabic patter, though this type of singing is usually reserved for Czech opera. Many of the melodies could have been penned by Janáček. This all amounted to a lost opportunity to expand the film or comment on the dialogue, rather than parrot the original script with overdubbing. Setting the work in English and subtly altering the plot would have been one option.

The musical interest of this score comes from the vocal declamation.

Glass’ constant return to minor harmonies, stirring undulations, and tense pedal points gave the movie’s scenes a brooding, claustrophobic quality, but the composer never fully succeeded in warming up the lighthearted scenes. Glass does, however, reverse the normal scheme of voices: The Beast becomes a nasal tenor, Beauty a sultry alto. Yet this introduces a degree of aural dysphasia in a score otherwise mimetic to the screen. I also wish the producers had done something to scrub over a set of noxious anti-Semitic scenes involving a Jewish lender — in a 1946 film, no less! Cocteau, an ardent Nazi sympathizer, was arraigned for collaboration in the same year as the film but was let off the hook because of his political connections.

In the Yerba Buena Center production, the vocal performances were spot-on, though this is a qualified assessment due to the marked amplification. Overdubbing the Beast was Gregory Purnhagen, whose nasal tenor lent a degree of fragility to the role. Marie Mascari’s soubrettish soprano was stylish and a triumph of casting. Hai-Teng Chinn’s alto significantly darkened the role of Beauty, but her velvety voice hinted at the emotional depth associated with her character. Rounding out the ensemble was baritone Peter Stewart, who created the role in the work’s premiere.

Michael Riesman’s music direction was essential, because Glass does not bind the music to the video works via a click track. This means the conductor requires “perfect tempo” akin to how some individuals have perfect pitch. Riesman’s tempos hit the mark, and I could only discern an effort to “catch up” in one minor scene.

The majority of the musical palette is built on an array of synthesizers, typically using the basic 128 patches of general MIDI (essentially, electronic-organ stops: press a button and the notes sound like a harpsichord, “slap bass 1,” or “synth strings 2,” one of Glass’ favorites). While fun technology in the early 1990s, this approach to keyboards is a bit dated. One MIDI sample, a particularly bad church organ (MIDI patch 19), sounded like it waltzed over from Andrew Lloyd Webber’s Phantom of the Opera. In the course of revival, I am sure the production team could have found a newer, less vulgar implementation of technology.