Beauty and Sorrow Rule The Day

The Day explores of the meaning of 9/11. It was conceived by cellist Maya Beiser, who began working on it that month, together with composer David Lang. They were both in New York when the World Trade Center’s twin towers came down. Beiser and Lang’s creation began in 2001 with “world to come,” the music that became The Day’s second half; in Beiser’s words, “a kind of prayer ... a meditation on the eternal, post-mortal journey of the soul as it separates from the body.”

In 2016, Lang composed the first half of the work, “The Day,” which became the title for the whole piece. It premiered at the Jacob’s Pillow Dance Festival last summer and was presented at Herbst Theater Wednesday and Thursday by San Francisco Performances.

To go with Beiser’s stunning cello performance, which she played both live and on a multitrack recording (Dave Cook created the sound design), Lang put together a text using hundreds of people’s internet posts. Each recorded line of text, spoken by Beiser, comes six seconds from the next and begins with the words “I remember the day.” These memories are in alphabetical order, which gives each the same weight. So we hear accounts of daily life, but also moments of excruciating pain and resonant joy.

It’s a bit like Thornton Wilder’s Our Town for our day. “Does anyone ever realize life while they live it ... every, every minute?” Emily, temporarily back from the grave, asks the Stage Manager after she visits her home town. The sorrow she feels for not paying attention to each moment of life could well be what The Day’s audience feels. Given the enormity of the loss on 9/11, every phrase, touching or foolish, trivial or vital, takes on a new resonance. “I remember the day,” each line begins:

What makes the text jump off the internet, though, is the pioneering modern choreographer Lucinda Childs’s dances, as performed by Wendy Whelan. Since her retirement as one of the New York City Ballet’s leading artists, Whelan has become an international influence in contemporary dance and, not incidentally, still compels attention with her every supple move. She’s off pointe now, but she hasn’t lost a step, and Childs’s steps here are remarkable for their clarity and beauty.

Here, they take place on a black and white set of eloquent simplicity designed by Sara Brown, with Joshua Higgason’s evocative projection designs in shades of black and white, and lighting by Natasha Katz.

There’s a short ramp, at the top of which, in the first half, sits cellist Beiser, while across the stage from her there’s a stool marking Whelan’s home base. In the second half, they switch places and also Karen Young’s casual costumes, from white in the first half to black in the second. The dance is deceptively simple as well; barefoot, with Childs’s distinctively repetitive patterns of steps and turns, weighting and unweighting, especially in the more intense second half, as Whelan slides on her feet or on her hips down the little ramp, or turns in circles to reascend it.

The dance retains an aura of self-effacement matching the gravity of the subject. Whelan never seems to play directly to the audience, but dances at an oblique angle.

Childs also pays close attention to the geometry of the human body and — who knows — maybe the physics of Fate. She gives Whelan elastics and cords to move with; to grasp tautly with both hands as if they are yardsticks, or to use to describe semicircles, or to loop over her feet or to stretch the length of her slender arms, evoking Da Vinci’s sketches, especially his Vitruvian man. It’s wonderful, and it’s sad: “Here,” the piece says, “this is how people move, and here is how these people will never move again.”

In the second half, the more-complex, more-staccato dancing and Beiser’s more percussive rubato, as well as the movements of her torso, shoulders, and arms as her bow bounces on the strings, is another forecast of impending doom.

If that isn’t enough, there’s a metal pendulum hanging down from the flies, slightly off center stage, a bomb-like pointy thing like, perhaps, one of the hijacked jets, seeking its target.

The Day checks in at 70 minutes. It seems both longer, for its depth and richness, and shorter, brutally shorter — a work of imagination and reality, “suffused,” Beiser said, “with the disappearance of the thousands of people who vanished into the ashes of the World Trade Center that day.” 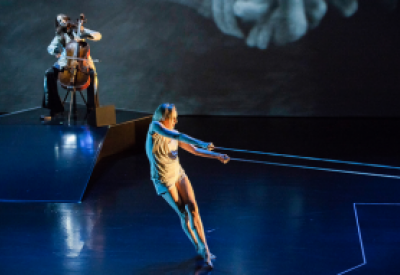 After playing second fiddle to text on Lang’s new piece, cellist Maya Beiser shines on his earlier world to come.